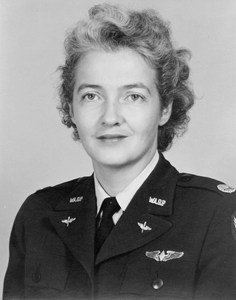 Born Hannah Lincoln Harkness in Houghton, Michigan, Love was the youngest woman in the US to earn her private pilot’s license and qualify for a commercial license. She began flying at 16 after going up with a barnstormer and earned her private pilot’s license later that year. Love continued to fly during her college years and earned her commercial license after graduating from Vassar in 1932. While flying for the Inter-City Air Service in Boston, Nancy met Robert Love whom she married in January 1936.

Love managed the extensive administrative duties first for her 25 WAFS and then for the expanded group of WASP assigned to the ATC. While running the program, Nancy still made time to fly.

After the WASP program was disbanded in December 1944, Nancy continued to fly while she raised three daughters. She was awarded the Air Medal and was given the rank of lieutenant colonel in the U. S. Air Force Reserve. 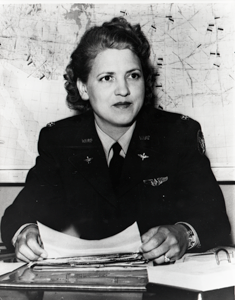 Born Bessie Lee Pittman in Pensacola, Florida, she married Robert Cochran whom she later divorced after the death of their son. Cochran got her start as a hairdresser at Saks Fifth Avenue in New York City and after meeting Floyd Bostwick Odlum, one of the richest men in the world at the time, established a cosmetics business. After marrying Odlum and taking flying lessons in the 1930s, Cochran flew her own aircraft around the country to promote her products.

Before establishing the WFTD, which became the WASP, Cochran won the 1938 Benedix Transcontinental Air Race and flew with the British Air Transport Auxiliary that ferried American built aircraft to Britain. She was the first woman to fly a bomber across the Northern Atlantic.

After the WASP program disbanded Cochran was awarded the Distinguished Service Medal, Distinguished Flying Cross, and given the rank of colonel in the U.S. Air Force Reserve. She was the first woman to break the sound barrier in 1953, became the first woman to fly at Mach 2 in 1964, and at her death in 1980, held more speed, distance, or altitude records than any other pilot. 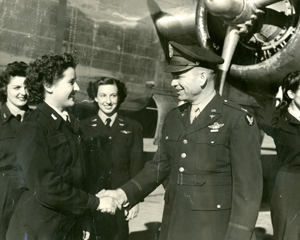 Henry Arnold was born in Gladwyne, Pennsylvania and after graduating high school, entered West Point. At West Point, Arnold was commissioned a second lieutenant and sent to the Philippines. Arnold became interested in aeronautics and after asking for a transfer to the Signal Corps, was sent to Ohio for a course in flight instruction at the Wright Brothers aviation school.

Arnold supported the development of the Air Corps through WWI and was appointed to Chief of Air Corps by President Franklin D. Roosevelt on September 29, 1938, eventually rising to the rank of Army Air Forces Commanding General in 1942.

After initially rejecting the proposal of allowing women to ferry planes, Arnold became instrumental in the development of the WAFS and WFTD, which eventually became the WASP. After news of disbandment in December 1944, Arnold spoke at the last WASP class graduation. He said he had not been sure of his decision to start the program but, “Now in 1944, it is on the record that women can fly as well as men.”

Arnold died in 1950 at home in California. He had earned most of the military honors the U.S. can give to a military leader including being appointed the first general of the Air Force at a five star rank. 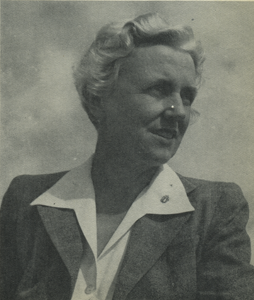 Sheehy was an Iowa native who moved to Southern California with her husband in the early 1930s. For a time, Sheehy was San Bernardino County’s only licensed female pilot. She became an early member of the 99s and served as their president in 1944. Sheehy flew in the 1935 National Air Derby with her husband as co-pilot and mechanic. They finished in 5th place.

When WWII began, Sheehy’s husband found work for the war effort in California and she was asked by Jackie Cochran to recruit female pilots to ferry planes for the military. Cochran named Sheehy the Chief Recruiting Officer for the WASP. Sheehy sent wires to potential recruits, placed announcements in newspapers, and set meeting times for potential trainees. She interviewed candidates and sent them for Army physicals if they met basic requirements.

Sheehy was promoted to Special Field Assistant and made inspection tours of the bases to check on the women and the conditions, making reports and changes as needed. She continued to fly after the war and died in Canada in 1962 while visiting family. 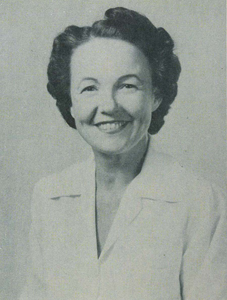 In 1942, Jackie Cochran met Deaton in Fort Worth, TX. Deaton was interviewed by Cochran and shortly after was named the Chief Establishment Officer. This role would utilize her exceptional organizational skills and past experiences working as a Red Cross instructor and administrator in Wichita Falls, Texas. Deaton arranged lodging in Houston for the incoming WFTD recruits, transportation to and from the base, meal logistics, and created the policies and rules for the trainees while on base.

Deaton continued to manage the trainees at Avenger Field until the WASP were sent home in December 1944. After returning home to Wichita Falls, she continued her work with the Red Cross. Deaton died in 1986 and was buried in Wichita Falls.