As civilians the WASP had no insurance, no burial and death benefits, no military rank, and no Veterans benefits. By contrast, women serving in other branches of the military including the WACs, WAVES, and SPARS received all of these benefits. Militarization was a long time objective of Cochran and General Arnold’s and throughout the program the WASP believed they would be granted military status.

In March 1944 Congress began considering legislation to militarize the WASP but on June 21, 1944 the bill was defeated in Congress by 19 votes.

In the fall of 1944 the United States was winning the war and men started to come home. There were indications that by the end of the year there would be sufficient male pilots to fill flying assignments in the U.S. and overseas, and as a result, the War Department announced its decision to disband the WASP. On October 3rd, Cochran sent a letter to all WASP informing them of the program’s pending deactivation.

On December 7th, 1944, the last group of women pilots graduated from the program, class 44-10, at Avenger Field. One minute past midnight on December 20th, 1944, the WASP were officially just women. They were supposed to be provided transportation home, or at least officially as close to home as possible. Some bases were grateful to have had them, sorry to see them go, and glad to be able to offer them transport. Others only saw them as far as the gates. 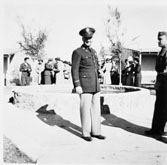 You and more than 900 of your sisters have shown that you can fly wingtip to wingtip with your brothers. If ever there was any doubt in anyone’s mind that women can become skillful pilots, the WASP have dispelled that doubt... So, on this last graduation day, I salute you and all WASP. We of the Army Air Force are proud of you; we will never forget our debt to you.

Deactivation of the WASP was costly for both the war effort and taxpayers. It deprived the ATC of about 200 expert ferrying pilots, tow target pilots, test pilots, and administrative pilots. It cost a million dollars to train men to do women’s jobs, and it hampered the delivery of planes during the four to six months necessary to train the men. It also prevented men who were being transferred to ferry duty from completing training for specialized combat missions. The WASP had 18 months experience that could not be replaced.