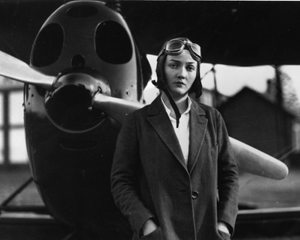 On September 28, 1939 pilot Jacqueline Cochran sent a letter to First Lady Eleanor Roosevelt encouraging the use of women pilots in the armed forces. Roosevelt introduced Cochran to General Henry H. “Hap” Arnold, chief of the Army Air Force, and General Robert Olds, who became the head of the Air Transport Command (ATC). Cochran traveled to England to ferry a bomber in order to generate publicity for the idea of women piloting military aircraft and while she was there, volunteered for the Air Transport Auxiliary.

In May of 1940, Nancy Harkness Love wrote to General Olds as well, with a plan to use women pilots to ferry planes for the ATC. Love wrote, “I’ve been able to find 49 women pilots I can rate as excellent material … and there are probably at least 15 more that are up to handling pretty complicated stuff.”

After the outbreak of WWII in 1941, both Cochran and Love independently submitted proposals to the U.S. Army Air Forces to allow women pilots to fly non-combat missions.

Women Take to the Skies

While Cochran and Love were proposing basically the same idea about women flying for the military, women across the country were earning flight hours. This was the age of aviation discovery and women were proving themselves in the skies. Amelia Earhart had opened the doors for women and demonstrated that there was enough room in the skies for both male and female pilots.  At the same time, experienced women flyers like Teresa James were barnstorming across the country and Cornelia Fort was teaching others how to fly.

The Need for Women

In anticipation of direct involvement in the war, the United States began building its air power and military presence in 1941. This increase in activity revealed gaps in manpower that could be filled by women. However, it was not until after the attack on Pearl Harbor on December 7, 1941  that it became evident that there were not enough male pilots. The demand for male combat pilots and warplanes had left the ATC with a shortage of experienced pilots to ferry planes from factories to points of embarkation. 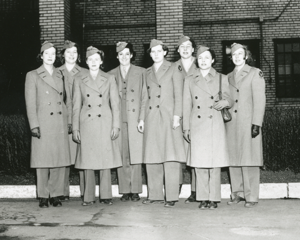 Love’s husband, Robert Love, was appointed ATC Deputy Chief of Staff and had an office next to Colonel Tunner, who commanded military airlift operations with the ATC. Tunner’s interest was piqued when he learned that Love’s wife was commuting by plane from Washington to Baltimore for her job. Tunner was in need of women pilots to deliver aircraft to air fields around the country and asked Nancy to draft a proposal which he forwarded to General Harold L. George, who was in charge of the ATC at the time. General George forwarded the proposal to General Henry H. Arnold in July 1942. On September 5, General Arnold directed Love to begin recruiting women pilots and the Women’s Auxiliary Ferrying Squadron (WAFS). The WAFS went into operation publicly on September 10, 1942.

Cochran returned from England the day before the announcement of the WAFS and flew to Washington, D.C. the next day to confront General Arnold about why her proposal went unanswered while Love’s was initiated. On September 15, 1942, General Arnold  approved Cochran’s program to train 500 women to serve as ferrying pilots and placed the training school under her direction. The program was called the Army Air Forces Women's Flying Training Detachment (WFTD).

From the beginning, the two programs, the WAFS and the WFTD, operated independently and without much interaction between their two rival leaders, until the summer of 1943. It was then that Jackie pushed aggressively for a single unit to control the activity of all women pilots. On August 5th, 1943, the WAFS and the WFTD were merged and re-designated as the Women Airforce Service Pilots or WASP. Cochran was appointed the Director and Love named WASP Executive with the ATC Ferrying Division.