From the creation of the Manned Spacecraft Center to the launching of the International Space Station and beyond, "Making Space for Women" explores how careers for women at Johnson Space Center have changed over the past fifty years as the workforce became more diverse and fields once closed to women—the astronaut corps and flight control—began to open. Jennifer M. Ross-Nazzal has selected twenty-one interviews conducted for the NASA Oral History Projects, including those with astronauts, mathematicians, engineers, secretaries, scientists, trainers, managers, and more. The women featured not only discuss leadership, teamwork, and the experiences of being “the first,” but reveal how the role of the working woman in a predominantly white, male, technical agency has evolved.

The narratives highlight the societal and cultural changes these women witnessed and the lessons they learned as they pursued different career paths. Among those included are Joan E. Higginbotham, mission specialist aboard the Space Shuttle Discovery; Natalie V. Saiz, first female director of the Human Resource Office; Kathryn Sullivan, the first American woman to walk in space; Estella Hernández Gillette, the deputy director of the center’s External Relations Office; and Carolyn Huntoon, the first woman director of the Johnson Space Center.

"Making Space for Women" offers a unique view of the history of human spaceflight while also providing a broader understanding of changes in American culture, society, industry, and life for women in the space program. The women featured in this book demonstrate that there are no boundaries or limits to a career at NASA for those who choose to seize the opportunity. 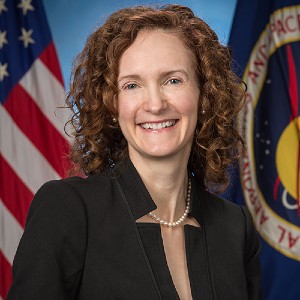 Dr. Jennifer Ross-Nazzal has served as the Johnson Space Center Historian since 2004. She provides real-time resource and reference assistance to internal and external customers, and has shared her expertise with many NASA areas, broadcasting agencies, documentarians and others. She was awarded her Ph.D. from Washington State University, her master’s in History from New Mexico State University and B.A. in History and Political Science from the University of Arizona. She also holds a certificate in Historic Preservation and a second master’s in Information Science from the University of North Texas.

Ross-Nazzal holds the unique distinction of being a scholar of NASA history and women’s history. She has been featured as a subject matter expert in several documentaries; is an accomplished oral historian; has presented at numerous national conferences; and authored many publications. In 2014, the Texas State Historical Association awarded the Liz Carpenter Award for Research to “Texas Women: Their Histories, Their Lives,” a book containing her chapter on Mae Jemison, the first female astronaut of color. In 2012, she was awarded the Charles Thomson Prize from the Society for History in the Federal Government for her chapter focusing on the Shuttle accidents in NASA’s “Wings In Orbit: Scientific and Engineering Legacies of the Space Shuttle.” Her essay, “You’ve Come a Long Way, Maybe: The First Six Women Astronauts and the Media,” was included in “Spacefarers: Images of Astronauts and Cosmonauts in the Heroic Era of Spaceflight” (2013) and noted as “fascinating and an in-depth study on how the first group of NASA women dealt with the still occasionally sexist media.” For this work, she received her second Thomson Prize in three years.

In 2011, she published her first book, “Winning the West for Women,” a biography of suffragist Emma Smith DeVoe. That same year, she was recognized by NASA Headquarters for her outstanding work as a historian for the Agency. Her latest book, “Making Space for Women,” focuses on the history of the JSC through the experiences of its female employees.