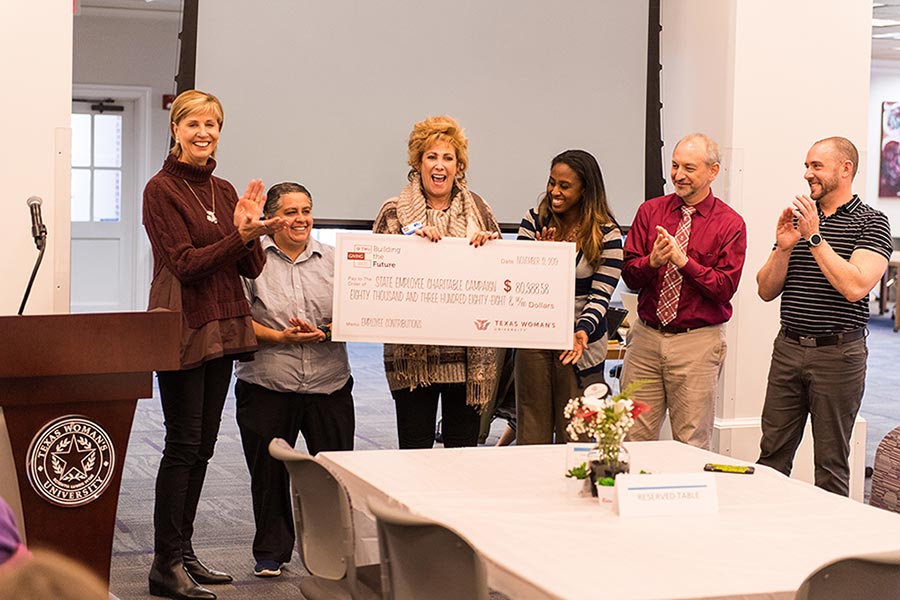 Texas Woman’s University’s participation in the State Employee Charitable Campaign (SECC) wrapped up Tuesday, Nov. 12, with a check for $80,388.58 presented to the campaign.

Nora Sierra (office of the Vice Provost for Institutional Research and Improvement) thanked those who participated in fundraising events, including the 1K/5K Fun Run/Walk, TriBALLathon, and Chili Cook-Off, Dessert Bake-Off & Basket Auction. Sierra noted the Bettye Myers Challenge featured a sliding scale this year to encourage participation, and it appears to have worked.

Chancellor Carine M. Feyten called the campaign “a labor of love and a labor of service to the community.” She thanked campaign Torchbearers for their hard work, and paid special tribute to co-chairs Sierra, David Rylander (business) and Scott Martin (office of the executive vice provost). “Without your leadership, this wouldn’t have happened," Feyten said.

Please invite your department’s employees to participate in our TWU SECC events!

Once again, TWU has taken home the 2018 awards for:
Largest Per Capita
& Level of Participation!

Congratulations to a caring University... Your support does count!