Among the new buildings dedicated in 1956 was the Arts and Sciences Building. Coreen Spellman, Associate Professor in the Art Department, was chosen to design the mural for the new building. The mural forms part of the brick wall facing Oakland Avenue. For her design, Spellman used a star motif, which is repeated in variations protruding in brick. Yellow-sand is the predominant color used, with complementary tones used throughout. 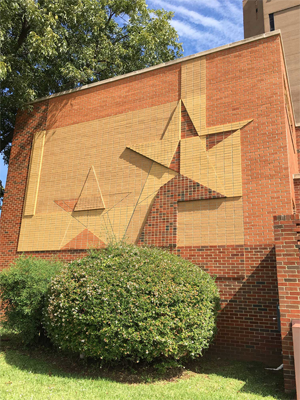 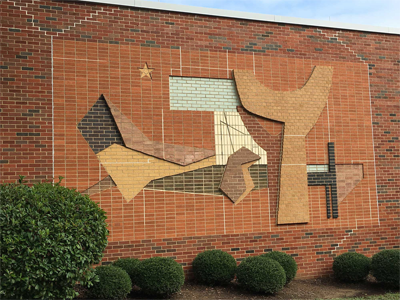 The Library Science Building (now Support Annex) was dedicated in 1956. Kenneth Loomis, Director of the Art Department, who had previously designed murals for both the Chicago and New York World's Fairs, designed the exterior mural. The LS Building mural is brick, measures 15 by 23 feet, and forms part of the structural wall on the building's west side, making the mural functional as well as decorative. The abstract design and the twelve colors used in the mural are drawn from nature in the Southwest. Different areas within the mural are recessed one inch while other areas protrude one inch. 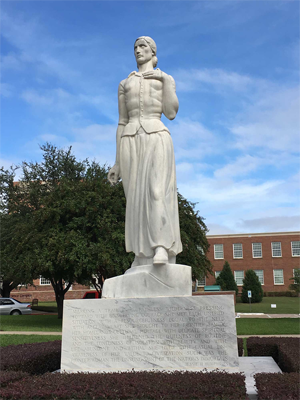 The Pioneer Woman statue on the TWU campus celebrates the indomitable spirit and heroism of the pioneer women who settled Texas. Designed by Leo Friedlander and dedicated in 1938, it was a gift of the State of Texas in observance of the centennial of Texas independence. The fifteen-foot statue, made of pure Georgia white marble, took three years to complete at a cost of $25,000. It is located on the west side of the Denton campus between the Music and Art Buildings.

The inscription at the base of the statue was written by Jessie H. Humphries, then dean of women:

MARKING A TRAIL IN A PATHLESS WILDERNESS PRESSING FORWARD WITH UNSWERVING COURAGE SHE MET EACH UNTRIED SITUATION WITH A RESOURCEFULNESS EQUAL TO THE NEED * WITH A GLAD HEART SHE BROUGHT TO HER FRONTIER FAMILY HER HOMELANDS CULTURAL HERITAGE * WITH DELICATE SPIRITUAL SENSITIVENESS SHE ILLUMED THE DULLNESS OF ROUTINE AND THE LONELINESS OF ISOLATION WITH BEAUTY AND WITH LIFE ABUNDANT AND WITHAL SHE LIVED WITH CASUAL UNAWARENESS OF HER VALUE TO CIVILIZATION
* SUCH WAS THE PIONEER WOMAN THE UNSUNG SAINT OF THE NATIONS IMMORTALS.

The original "Nike of Samothrace" was erected between 220 and 190 BC on an Aegean island to celebrate the Greeks' triumph over Antiochos III in Syria and is now exhibited at the Louvre Museum in Paris, France where it is known as The Winged Victory. The replica which graces the portico of Old Main is actually a replacement of the original replica given by the C.I.A. class of 1929 to commemorate Armistice Day and the defeat of autocracy. The first replica, a victim of years of exposure and finally vandalism, was replaced in 1982 after an alumna initiated a fund drive. The new replica was purchased from the Louvre and shipped from Paris.

"She Gave Us Wings" 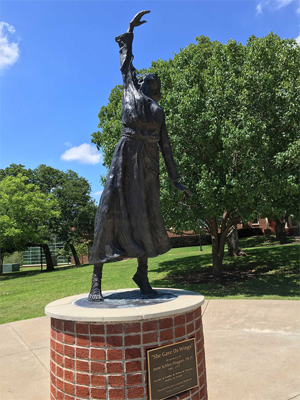 "She Gave Us Wings" is a gift from the Academic Alumni Chapter of Kinesiology in memory of Dr. Anne Schley Duggan, teacher and administrator of programs in health, physical education, recreation and dance at TWU from 1939 to 1973. TWU Distinguished Alumna Rosanne Keller created the bronze.

"Dr. Duggan was a woman before her time - a real titan," said Mary Ella Montague, chair of the kinesiology alumni chapter. "She put women's issues to the forefront. She gave us a feeling there
was no ceiling. That makes her worthy of being remembered."

Dr. Duggan wrote numerous books and articles on dance and other aspects of health, physical education and recreation. She contributed in large measure to the
establishment of modern dance as a vital art in the Southwest.

Before coming to TWU, Dr. Duggan taught at Columbia University in New York. While at TWU, she became the dean of the College of Health, Physical Education and Recreation.

Keller's work is on display throughout the United States and United Kingdom at universities, in churches and cathedrals and in private collections. In 1993, she was commissioned to create an 11-inch Buddha and eight ritual vessels for the private meditation room of His Holiness the Dalai Lama. A bronze she created titled "Reunion" was given by the Class of 1959 to the TWU Former Students Association and is on display at the Alumni House.

"She Gave Us Wings" was dedicated as part of TWU homecoming activities April 11, 2003 and is located on the lawn south of the TWU Institutional Development Building off Bell Avenue.

"The Lady of the Day" 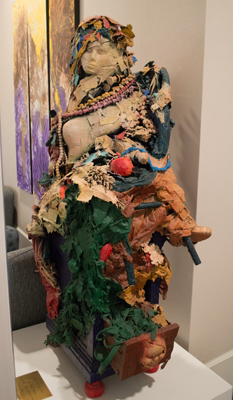 "The Lady of the Day" represents the female persona of the human experience. Those attributes of gentleness and kindness to which we are all attracted. She is all our mothers and we see this in the Madonna. She is all those feminine attributes which we enjoy. Yet, there is also an aloofness about her.

David Shipley is from Lubbock Texas, but currently resides in Southern California. He attended the Dallas Art Institute, the Cornish School of the Arts in Seattle, the University of Texas, and Texas Tech University. Both the "Lady of the Day" and "Woman of the Night" sculptures are located on the third floor of the Blagg-Huey Library.

"Woman of the Night" 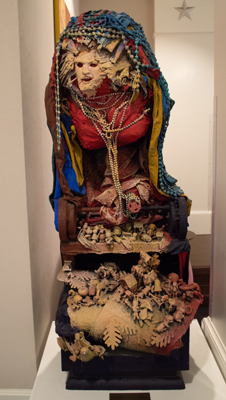 "The Woman of the Night" represents the aggressive, powerful side of the human experience. Attributes that frighten us at times because of their misuse, but which we also admire because of what these attributes can help an individual accomplish.

The WASP were an elite group of about 1,100 women who earned silver wings and took to the skies to serve their country from September 1942 to December 1944.

The expression on the upturned face of the statue captures both the love of flying shared by all the WASP and their motto from Avenger Field: "We live in the wind and sand and our eyes are on the stars..."

To the left of the statue is a bronze plaque inscribed with the names of the 38 Women Airforce Service Pilots who gave their lives in service to their country.