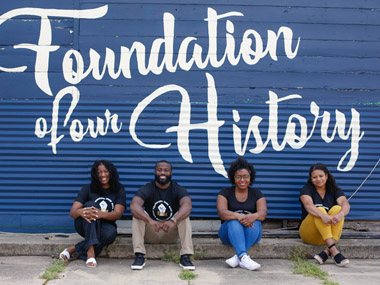 The unrest and protests spread quickly in the wake of George Floyd’s death.

The 46-year-old Black man was killed during an arrest for his alleged use of a counterfeit bill at a convenience store in Minneapolis, Minnesota, on May 25, 2020. Video footage showed Minneapolis police officer Derek Chauvin kneeling on Floyd’s neck for eight minutes and 46 seconds. Soon, those videos went viral.

“It was so in our faces with social media,” said Cindy Okemwenkhase, then a master’s candidate in the counseling and development program at Texas Woman’s University. “It was overwhelming because we were trying to process our own trauma. It’s never been in our faces that much, and then to have to show up to work and school and be normal was isolating.”

Out of those feelings, Okemwenkhase wanted to do something. She reached out to Tamara Starling, a doctoral student who’s pursuing a degree in school psychology, and Cameron Gibson, a master’s candidate pursuing a dual degree in counseling and development and school counseling, as well as a fellow intern at the Counseling and Family Therapy Clinic.

Together, they founded TRIBE: A Black Student Support Group. Jasmine Hammer, then a doctoral candidate pursuing a degree in school psychology, joined as a facilitator in the Fall 2020 semester.

“As students, we wanted a place to process and grieve together. We needed a healing space to just be,” said Okemwenkhase.

The group formed a new, safe and confidential space for students to “celebrate blackness and express themselves fully in community,” as well as to discuss police brutality, racial inequality and the various emotions that would arise, said Okemwenkhase. TWU’s Health and Wellbeing Initiative and the Counseling and Family Therapy Clinic both provided support. 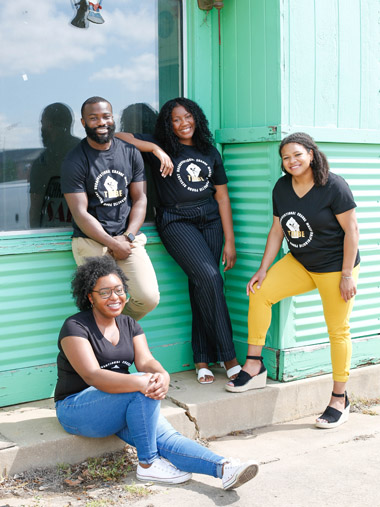 Kiya Brown said she learned about TRIBE in a student email.

“I was overwhelmed and back home for the first time in forever, which was stressful. And I was isolated from my friends. I was trying to escape. I’m in nine organizations and feeling pressured to do it all,” she said.

A sophomore, Brown said she initially felt intimated. At age 20, she is one of the youngest participants. Her grandmother encouraged her to open up.

“I shared how I was feeling. They were like, ‘that’s valid and your voice matters.’ It was reassuring,” recalled Brown.

“We really try to make TRIBE a place for everyone. We are all different. Our oldest member is 70,” said Okemwenkhase. “We’re holding space for people who look like us, but we are all complex and diverse and hold different identities and experiences of what it means to be Black people. As Black students, our experiences vary as we all hold different roles in our lives.”

Participant Dawna-Diamond Tyson came in with an objective. As TWU’s Student Regent, she had hoped to be a supportive ear for students, but she realized the group could help her personally.

“I’m one of three Black students in grad school in the Department of History and Political Science. I love my professors and the department, but it’s disheartening not to see people who look like me. I had to read an article for class about how patriarchy has long suppressed Black women. But how do I talk about this subject to a professor? This is my life,” said Tyson, who is working on a master’s in political science.

She added that the group has helped in other ways.

“For example, my hair, I battled with that. A lot of people don’t accept it. They think it’s too ghetto and it’s too Black,” said Tyson, who started wearing her natural, unstraightened hair more often.

“I missed it. I missed my curls, my crown and putting my hair up a certain way,” she said. “God blessed me with a beautiful head of hair. I had to learn to be comfortable and realize there are a lot of supportive people at TWU.”

“We’re not licensed counselors, but we have that foundation,” said Okemwenkhase. “The sessions are led by the group. What they say moves and changes the session. TRIBE is a village. It’s a place for Black students to find their ‘TRIBE,’ their community, within TWU. Just like the saying goes, ‘it takes a village.’”