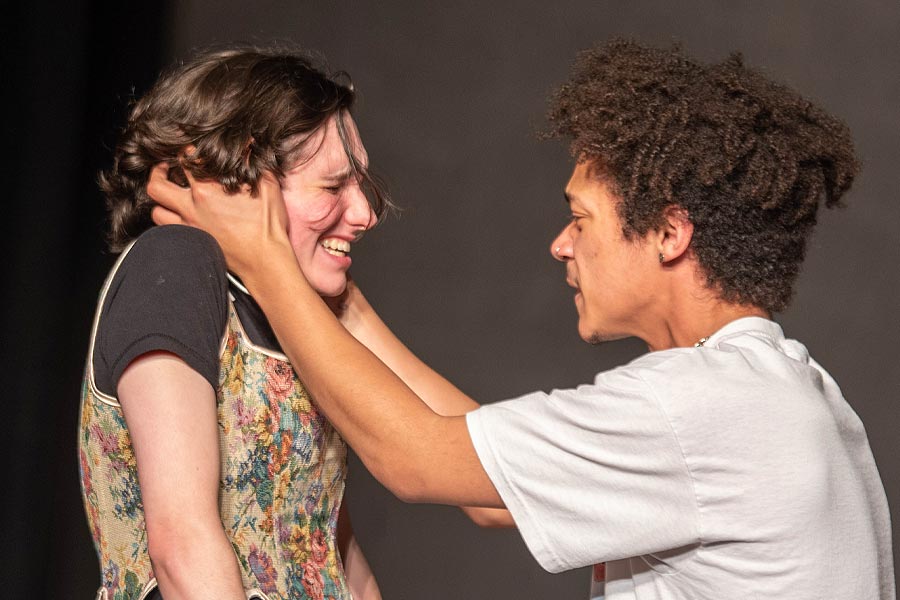 Nov. 14, 2022 – DENTON – Exploitation of children is part and parcel of human history. But imagine a world where indentured child labor did not take place behind the closed doors of sweatshops, but out in the open, on stage for public consumption. Where children could be scooped up off the street and put to work. And where the law did not turn a blind eye to such exploitation but actually sanctioned it.

This is the world of The Children of the Queen's Writ, the second play of the Texas Woman's University's theatre division's 2022-23 season. The play opened Nov. 16 at TWU's Redbud Theatre Complex on the north side of Hubbard Hall.

NOTE: Due to unforeseen circumstances, the weekend performances of The Children of the Queen's Writ have been postponed to Dec. 2-4. Tickets for those performances are on sale. Performance dates and ticket information are shown below.

The play, a world premiere written by Steven Young, TWU associate professor of theatre, and directed by Patrick Bynane, professor and director of the TWU theatre program, is set in Elizabethan England and tells the story of Thomas Clifton, a historical figure who was kidnapped as a boy from the streets of London and pressed into a boys' company.

"The boys' companies were just what they sounded like," Bynane added. "They were theatrical companies of prepubescent boys who did adult theater. They were doing works like mythological stories about Venus and Sappho and the rape of the Sabine women. But they were all boys playing the men and women characters."

A law approved by Queen Elizabeth I gave churches the power to create a system of indentured servitude to maintain a steady supply of boys for their choirs. The law was later extended to the theatre, resulting in companies of boys signed when they were eight or nine years old as members of a guild and declared apprentices. When their voices broke and they no longer had that feminine sound, the boys were expelled from the company and left on their own.

"This era is known for William Shakespeare and Ben Johnson and Christopher Marlowe and Richard Burbage and these legendary names in theater history that we sort of look upon as a golden age," Bynane said. "But we only look upon it as a golden age if we're looking at it very, very selectively. It was also an age in which human trafficking was just considered part of daily life.

"We don't study these boy theatricals too closely in theater history," he said. "They're not viewed as being particularly important to the overall legacy of the development of the theater. But the fact is, the companies were wildly popular. So much so that if you re-read Hamlet by Shakespeare, there is a section in there in which Shakespeare just goes off on the boy companies."

Of course, one need not go back to 1600 to find examples of child exploitation for entertainment. Hollywood is littered with tales like The Little Rascals, Drew Barrymore, and Britney Spears.

"That's sort of the other issue that we wanted to tackle with the play," Bynane said. "There's this very, very fine line that has always existed in any of the performing arts between entertainment and exploitation. It's one thing if we are talking about 18-year olds or 25-year olds who have decided to put themselves out of there. It is a very different thing when we are looking at a nine-year old, an 11-year old or a 14-year old being put out there.

"We have a scene in which Shakespeare and Burbage get into a rip-roaring argument about whether they should open the Globe to the boy companies. Shakespeare is adamantly opposed to it because he was a father and was not going to take any part in it. Burbage, being the son of a theater owner, takes the point of view that everybody else is doing it, and we're getting shellacked financially. So we're exploring a lot of those issues."

It's not lost on Bynane that the play is being performed by young people barely out of childhood. This year's company has several freshmen who just turned 18.

"The first couple of weeks we were teaching them, they were still minors," Bynane said. "And I think that is one of the reasons why we pursued this story. It is one of the challenges, because me, as a 50-year old man, I'm looking at this from the lens of history and from my own position as a parent and my own sense of outrage at what could have happened and all of that. But to our students, there's an immediacy to the topic.

"And in some cases we are depicting violence against children. The apprentices were not controlled by reasoning or being given a timeout, they were physically punished, often brutally so. There was an element of sex trafficking that always hung over the theaters at that era, and we have reason to believe that the children were potentially abused in that way."

Clifton's was a famous case that went through the English courts, eventually resulting in Clifton being given his freedom. Clifton is portrayed in The Children of the Queen's Writ by Adrian Theisen, who studied the story before taking on the role.

"You have to be mindful," Theisen said. "The thing is, Thomas wants to be a performer. It's just that the manner in which he is a performer is happening without his consent. He's wearing a tutu and he's got to get up there and just do it. So I have to think about, if I were watching this, how is the behavior of the actors affecting the story? Because it does have a profound effect on the story. If I get up there and I'm doing something that is not in line with the gravity of the situation, that creates a different story in the mind of the audience."

It's a dramatic shift for Theisen, who just a few weeks ago was portraying a 45-year-old in the season-opening The Effect, which included a monologue by Theisen's character holding the brain of his late father.

"We started rehearsals for this the day after we closed the last show, so it was immediate," Theisen said. "I think we did our first read through while we were doing The Effect, so nonstop all the way through. It is definitely kind of odd because what I'm doing is very different in this one than what I was doing in the last one.

As for the violence in the play, that's something the cast has practiced endlessly to get the punches and slaps close enough to be believable but not close enough to endanger the actors.

"We have a very long fight call at the beginning of every rehearsal," Theisen said. "It's so much more boring than you think because we just do it over and over and over and over and over again. By the end of the process, you're like, 'Oh, God, I'm sick of punching people.' Rehearsal is like dancing. If you want to not hurt yourself, do it over and over again until you just can't stand to do it anymore. Then the problem is getting complacent. So you have a new set of issues, but when you have it in your muscle memory, it's a lot easier to keep each other safe. There's a lot that goes into stage combat, like eye contact, making sure that you're always in mental control of the situation. Don't let your emotions get the better of you."

Tickets for The Children of the Queen's Writ are $10 for adults, including TWU faculty and staff, and $5 for students, children and senior citizens. Tickets for the new show dates will go on sale Nov. 19. The performance on Saturday, Dec. 3, at 2 p.m. is a pay-what-you-can performance for TWU students if tickets are available. Tickets are on a first-come, first-serve basis. Cash only.

The Children of the Queen's Writ contains adult language and content, violence, and sexual situations. Viewer discretion is advised.

Buy tickets to The Children of the Queen's Writ