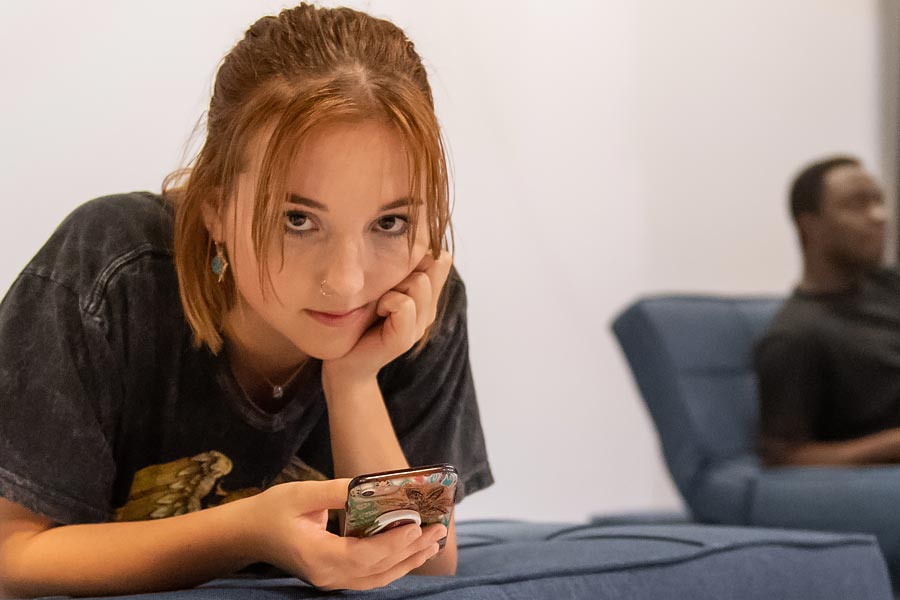 Oct. 6, 2022 – DENTON – Intimate is a good way to describe the TWU Division of Theatre’s season-opening production of The Effect.

An intimate subject matter. A small, intimate cast. And an intimate experience for the audience, some of whom will be seated onstage with the actors.

The Effect, which runs Oct. 12-16 at TWU’s Redbud Theater at the north end of Hubbard Hall, is about two students falling in love during a clinical trial for a new anti-depressant. The students find themselves trying to understand if their feelings are real or a product of the drugs. The play was written by Lucy Prebble.

“With such a small group of people and a pretty intense script, you can’t help but get kind of close to the people you’re interacting with,” said Brenna Petersen, who plays Dr. Lorna James.

“It’s very relevant,” said director and associate professor of theatre Noah Lelek, PhD. “Clinical trials offer money for their time, so you get these kids on a trial taking a new drug. But it’s still walking in there not knowing if you’re on the placebo or the drug, and not knowing what the drug could do.

“Having really clear relationships in the story, and not letting the audience know where it’s going I think is one of the best things,” Lelek said. “You think you know something and then you don’t. I think it’s really interesting for the audience.”

And that audience will be up close to the play. The Effect features thrust seating, in which the audience is seated on three sides of the action. Two of those sides are actually on the stage.

“What I’m trying to do is have the audience feel like they’re in the clinical trial, too,” Lelek said. “We haven’t done thrust seating before. It will be a really interesting experience for the audience to feel what the actors are feeling. We’re sort of into the minds of these characters as they’re going through these clinical trials.”

The students at the center of the story are Connie and Tristan, played by Mercedes Slade and Dinvela Adam, respectively. Both are freshmen.

“It was really weird going to college and getting the lead,” Slade said. “I thought I might get the ensemble, so I was pleasantly surprised to get the lead. I called my mom at 10 o’clock at night, ‘I got the part!’”

It’s a part that calls for Slade to play against type. She’s nothing like the character she’s portraying.

“Connie is very uptight,” Slade said. “She second guesses a lot of things and does not trust easily. It’s fun to not just be yourself, but it’s also harder when you’re trying to get into the mind of the character and understand her motivations.”

Adam, who is from Plano, got his first taste of acting in high school but really got interested after attending two plays at Redbud.

“I was so captivated by the shows they were doing and the acting, and how next level everything was,” said Adam. “I wanted to be a part of that, so I came here. I didn’t expect to be thrown into such a big role so early on. It was a bit frightening at first, but once we got started with the whole process and everything was on track and we had a schedule for everything we were doing, I got more comfortable and I’m just flowing with it.

“Tristan is one of the more outgoing characters in the show,” he added. “He’s kind of like a rebellious teen, but he’s older than Connie. He’s done these trials many times before. But something happens with Connie that changes him.”

It’s also been an introduction to the immersive life of an actor. During rehearsals one evening, a party with live music was taking place just outside the theater.

“It’s definitely taking up my entire life,” Slade said. “There’s a party going on outside. Can’t go to that. That’s just the life of theater, staying late, doing rehearsal after rehearsal and struggling to memorize lines. But it’s worth it.”

Alongside the newcomers are theater veterans, juniors Adrian Theisen and Brenna Petersen.

Theisen, who plays Toby, is in the third of his four TWU productions this year, two from the 2021-22 school year and two this season.

“The first time I read the script, I read the British version,” Theisen said. “I was very interested in playing Toby. He has a monologue in the show that I love. I think all four of the characters have obvious character flaws that make them very appealing to me as an actor. All four are very intriguing. I feel like they might resonate with people, and I love shows like that. You have characters who do things you don’t agree with but you understand why they’re doing that. It’s a very character-driven show.”

Petersen, a 20-year-old from a performative family, plays the 47-year-old Dr. James. Speak to her for just a few minutes and playing a much older character does not seem a stretch for Petersen, who has been on stage from the time she was eight.

“I’ve played a lot of adults,” she said. “I’m tall (5-foot-10), and that has always played into it. I have a demeanor that has pretty frequently gotten me older roles.

“She has a pretty vicious character arc,” Petersen said of Dr. James. “It’s profound, and it’s intimidating. It’s the most emotionally challenging role I’ve played in a while. She has a lot to offer, but she’s been a beast to tackle. I’m very grateful to Adrian. He and I have worked together before, and he’s been a help to me as I try to figure out where I stand with her and in the stories he and I tell in our scenes together.”

The experience of Petersen and Theisen have been a help on a complicated play like The Effect. Thrust seating forces the actors to keep positioning themselves so the audience can see the action, and presents challenges in lighting and sound.

And there are obvious romantic elements, which entails the actors touching and kissing. The rehearsals have offered privacy and clear lines of communication to make the actors as comfortable as possible.

“There has been in the past five to 10 years a push towards what’s called intimacy training,” Lelek said. “It’s making sure the actors are safe. They’re young and they don’t know each other. It's kind of up to them when they feel comfortable to kiss. We’ve done a rehearsal where they did, just to get it out of the way.”

“Emotional preparation is always interesting,” Petersen said. “You have to think of everything that goes into that choreography. One way we divorce ourselves from the concept of ‘I’m kissing someone I’m not with romantically,’ is how are we going to aim this so her lipstick doesn’t get all over his face. It’s finding that things like that, that are technically important, versus having some romantic, emotional idea about it.”

Tickets for The Effect are available online, $10 for adults and $5 for students and seniors. 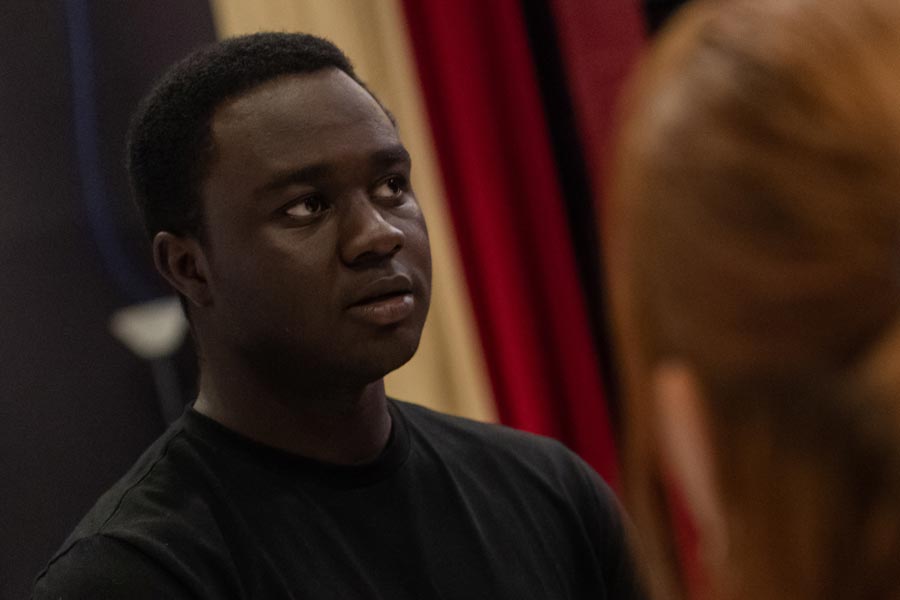 Dinvela Adam during rehearsal for The Effect (photo by Michael Modecki) 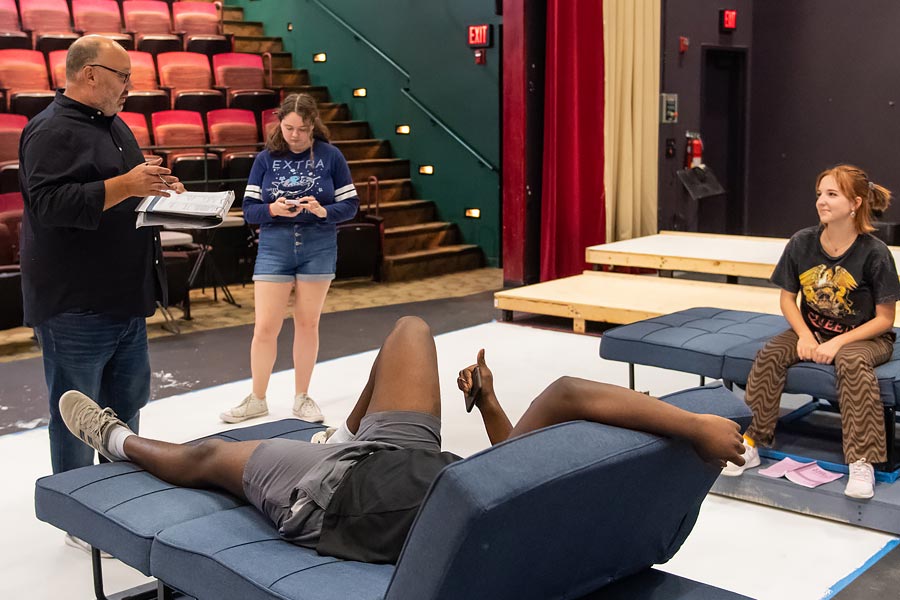 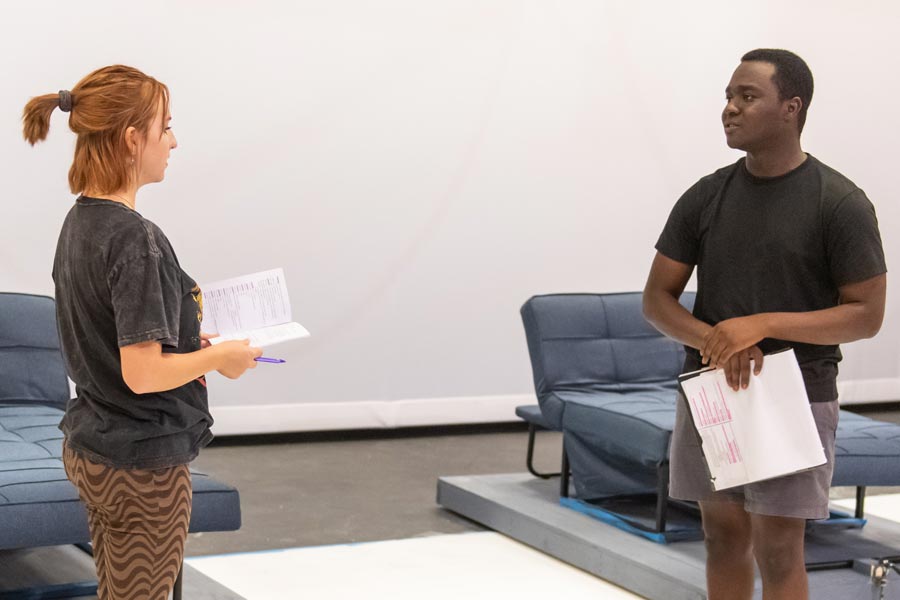