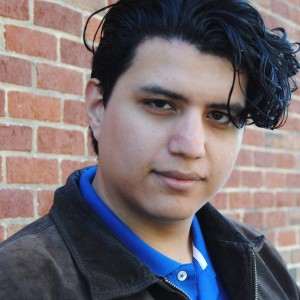 Jan. 29, 2020 – Texas Woman’s theatre student Alexander Delacruz-Nunez felt drawn to acting from an early age, but convinced himself that his hearing disability would prevent him from becoming an effective performer.

As a result, he shifted his focus to health sciences, studying the subject throughout high school and entering college as a nursing major. “I thought it would be the best course of action for me. I was very wrong, but everything happens for a reason,” said Delacruz-Nunez.

He soon realized that his chosen career path was not something that fulfilled him as a person. “I was looking for something that was good for the soul, challenged my creativity, and created a sense of community. Acting, and by extension, theatre, provided me with all of those and more,” he said.

Delacruz-Nunez has progressive hearing loss that borders on profound. “It makes every aspect of theatre that is hearing-based difficult to overcome. Acting poses a particular challenge for me because I can’t always hear what the next line will be.”

To overcome this barrier, he has taken on the monumental task of memorizing everyone else’s lines in addition to his own. “Through repetition and prediction, as well as tech and visual cues from other actors on or off stage, I can perform as if I don’t have a disability at all. I navigate life like I don’t have one, so I try my best to continue to do that on stage.” 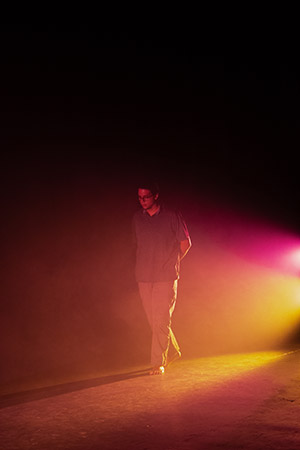 By developing relationships with faculty, staff and students in the department, and making them aware of his disability, Delacruz-Nunez has been able to overcome many of the obstacles he initially encountered. “I am very grateful that they are willing to support me while I find ways to become more independent as an actor. It will stick with me forever.”

He recently acted in his first major production, TWU Theatre’s “The Architecture of Loss.” He also has been part of TWU’s Interactive Theatre Troupe since its inception. The group uses interactive and improvisational theatre to educate, create dialogue, and promote awareness about sensitive topics including sexual assault, victim blaming and racial injustice. Additionally, he helped construct sets for TWU’s productions of “Love and Warcraft” and “Triumph of Love,” among many others.

For Delacruz-Nunez, his greatest achievement will always be the moment that acting “clicked.” He studied other methods and performance styles while asking questions, until suddenly it all made sense. “I was performing in a scene from ‘Tartuffe,’ and I was filled with this determination to bring forth something great, and I did! I couldn’t wipe the smile off of my face for a week.”

In the upcoming production of “These Shining Lives,” which runs Feb. 12-16, Delacruz-Nunez will play the role of Leonard Grossman, a defense attorney who takes on the Radium Girls’ lawsuit against their employer. He expects to graduate at the end of this semester, and hopes to find work in some aspect of theatre: acting, technical, production or administration. “I’m not picky, I know I will be happy and fulfilled as long as what I’m doing is art.” 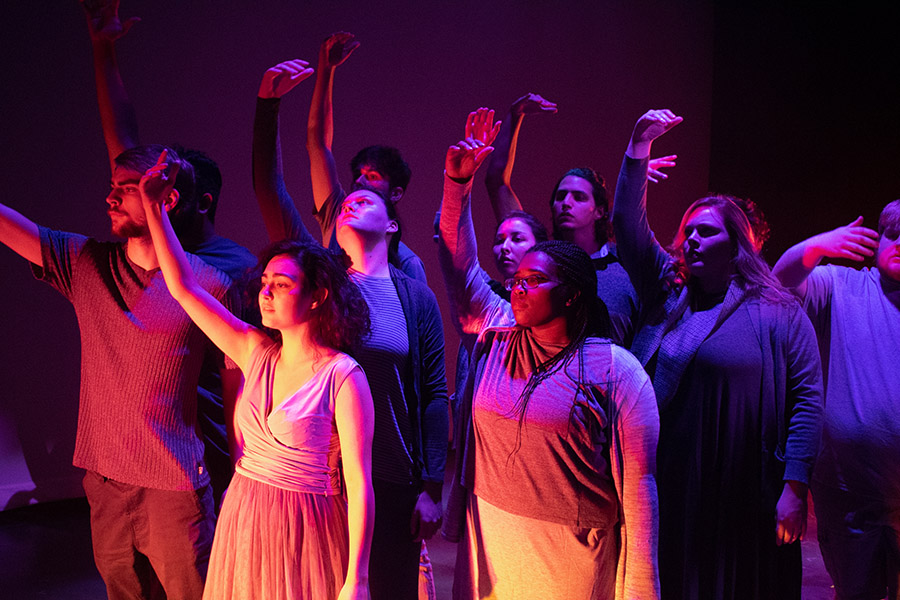 Alexander Delacruz-Nunez (center-right, back row) performing in the TWU Theatre production of "Architecture of Loss."