Students embark on journey to be part of TWU's DanceMakers 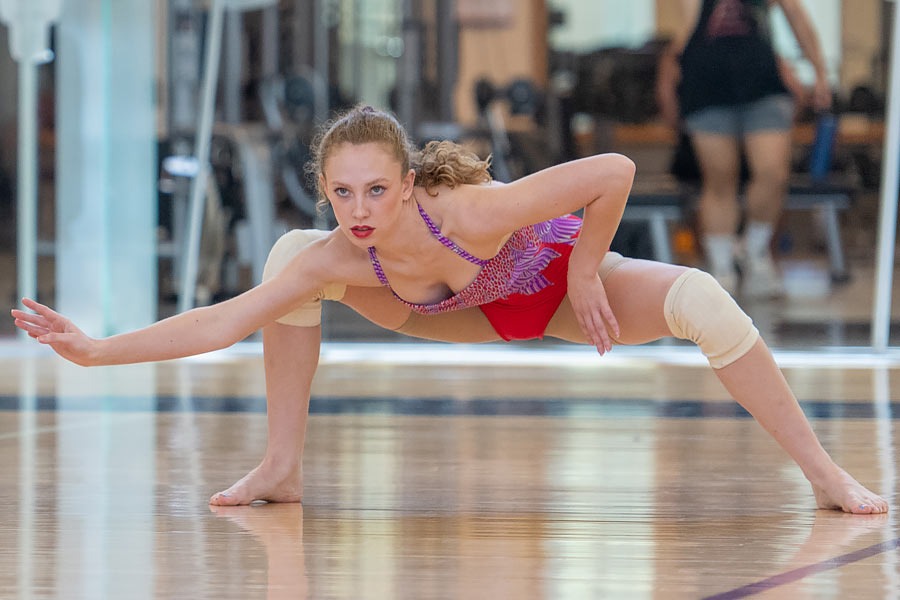 Sept. 15, 2022 – DENTON – Every September, prospective athletes gather to showcase their physical and mental skills under the watchful eyes of coaches who are building teams that would put those talents to use. A short time later, those athletes are selected – drafted – to be part of those teams.

This, however, is not the National Football League or National Basketball Association or Major League Baseball. It's the division of Dance at Texas Woman's University.

The athletes are student dancers and the coaches are student choreographers who are assembling teams of dancers to perform in the Fall 2022 DanceMakers show.

It's the start of a grueling process that culminates Nov. 17-19 at the Margo Jones Performance Hall. Seven weeks of rehearsals begin in September, and in early November a panel evaluates the proposed works for inclusion in the show.

So being drafted in September is still a long way from taking the stage.

The process of putting on a show began Sept. 9.

Held on the basketball court in the Fitness & Recreation Center, the DanceMakers audition is a cross between the NBA pre-draft combine and the audition scene from All That Jazz. Bleachers on one side of the court are occupied by scouts – the upperclassmen and graduate students who are choreography students this year.

The dancers come from all backgrounds, all skill levels, all genders, all shapes and sizes. "Every body dances, and everybody dances," is the motto.

More than 30 dancers – outfitted in everything from tights and leotards to shorts and t-shirts to sweat pants and yoga pants – are identified only by a number on a sticker on each dancer's chest. They warmup with stretches and calisthenics, spins and twirls, deep breaths and twitching fingers.

"It's the second week of school, so my body is still adjusting to new classes and new techniques that I'm learning in class," said Holly Griffin, a junior from Mineola in her second year to audition. "It's a lot of physical preparation. Mental as well. I think last year I was a lot more nervous. This year I feel more supported because I know a lot of the people, and we're a really, really tight community. We all love each other." 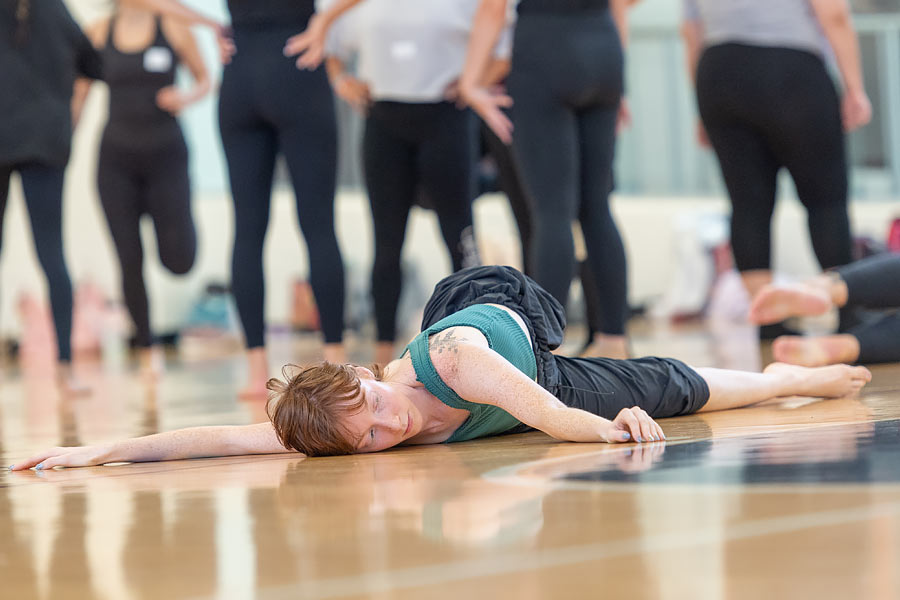 Junior Holly Griffin stretches prior to the DanceMakers audition. (photo by Michael Modecki)

"Some people lend themselves to moving really quick and sharp and staccato, and some people lend themselves to moving slower and maybe more expressive," Jordan said. "I talked to my fellow choreographer who is doing this alongside me. My thought process was to get a feel for what he's going to do, then either do something that complements it or something that's the opposite, so we can see as much from the dancers as possible and they don't focus on one style."

The audition begins with one of the toughest things a young dancer faces: learning steps they've never seen before. The choreographers describe the steps and movements, demonstrate them once, then again and again.

"The looks on their faces when they realize they have to learn this in a few minutes," said Kye Crawford, a senior from Alabama who moved to the Fort Worth area in 2014. Crawford is in her first year as choreographer, but she remembers her first time to audition. "It was rough. I think I cried."

"This has been a huge learning curve," Griffin said. "Learning something really fast was my biggest struggle and biggest fear. I believed in myself as a mover, but the short-term memory part was mind-blowing to me. But like anything else, it's a learnable skill. You flex that muscle enough, and I've been auditioning a lot."

As the choreographers walk through the steps, dancers attempt to follow, craning their necks and peaking around their fellow dancers. With no music at this point, the soundtrack is the muffled thump of bare feet on polished wood.

They're then divided into smaller groups, the music starts, and the groups take turns performing. The groups rotate quickly on and off the court, each getting multiple chances to impress their audience before lining up in front of the choreographers, who take photos and notes.

As the audition ends, there are no bodies bent double, hands grabbing pants. Everyone is winded but stands straight, sweaty but in no distress. Only one dancer suffers with a blister.

"Over the summer I did a lot of yoga," said Emily Boyd, a sophomore originally from Florida who moved to Denton at age 12. This is her first DanceMakers audition. "I was in the gym every day."

"This is what I want to do," said Cadence Banks, a freshman from Dallas who has ambitions of dancing for the Alvin Ailey American Dance Theater, a modern dance company in New York City. "I've always been moving my body."

The choreographers picked up on that determination.

"I thought they did an amazing job, considering the pace of the audition is so quick," Crawford said. "You have to be on top of it."

Almost everyone is smiling as they file out.

"It's tough, but at the end of the day we're just dancing," Garcia said. "That can be the first thing you forget."

"Dance is the most stimulating thing I've encountered," Griffin said. "I'm a musician as well and I've done all kinds of art. But in dance you have to use your mind, your body, and your creativity all at once. When it hits, when you get it, it's the most satisfying thing in the world. But it takes an immense amount of concentration to get all those things to match up perfectly." 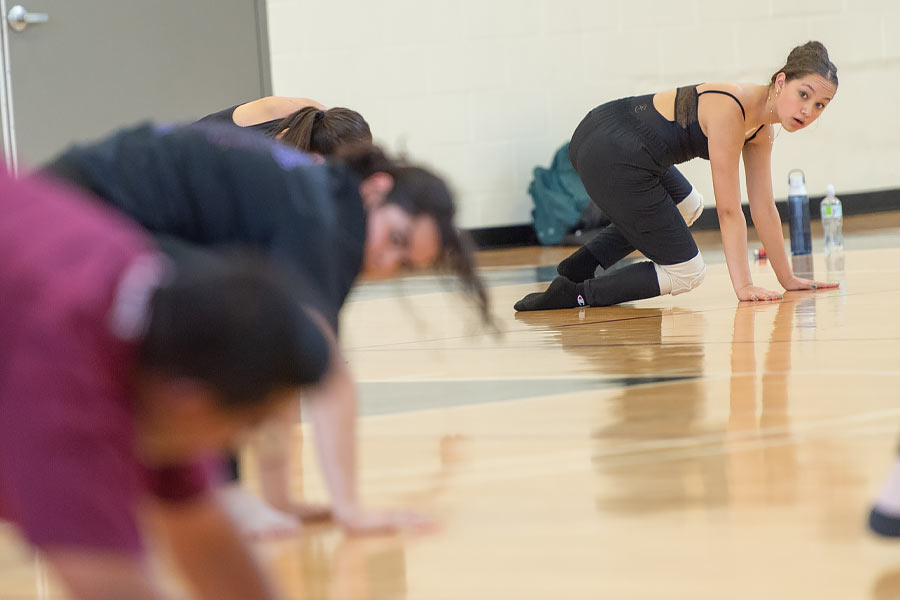 An hour later, the scene shifts to the Dance-Gymnastics Laboratory building, one of the oldest buildings on campus that was renovated in 2014.

Choreographers gather in one of the studios, surrounded by notebooks and laptops. Their shoes are discarded around the wall next to the door. A chair is provided for the odd visitor, but everyone else sits on floor cushions. It's a dancer thing.

The draft is conducted much like a fantasy sports draft. Choreographers are randomly assigned positions in the draft and then take turns selecting dancers.

But unlike sports drafts, their selections are limited to those dancers who are available at the times the choreographers are available for rehearsal. And these athletes can play for more than one team. It's all about availability to put in the four to six hours a week for rehearsals.

"I pushed one of my times back so I can use more dancers," said Hadley Voss, a graduate student from Hattiesburg, Miss. She has the numbers of several dancers scribbled on the back of her hand.

And here's where the differences in the choreographers show. While many have definite visions for their DanceMakers routines and are looking for specific styles to fulfill that vision, others are happy to work with what their dancers have to offer. Coaching to a style or coaching to a lineup – a long-standing dichotomy in sports and dance.

"For my process and what I want, I'm really collaborative," Jordan said. "I usually have descriptive guidelines and an abstract idea, and I want my dancers to show their interpretations of that, then we work on the piece. It's still in the works because I get the opportunity to work with a composer from UNT, so it's going to be a collaborative process between myself, the composer and the dancers. I'm leaving it open."

This year's draft differs from previous in that there are far fewer choreographers. Past drafts had 30 or 40, but this year there are only 11. Although classes are full again, there is a dearth of the juniors and seniors who fill the choreography classes.

With so few choreographers, there are plenty of dancers to go around so there are no disputes over selections.

When all picks are made, one last phase begins before rehearsals. Like pro sports drafts, there are free agents. In sports, it's athletes who were not drafted. For DanceMakers, it's dancers who may still be available for an extra time slot.

"We reach out to them." Voss explained. "'Hey, I really loved what you did in auditions. These are my rehearsal times, would you be interested in being a part of this?'"

And now the work of putting on a show really begins.

Click here to buy tickets for the Fall 2022 DanceMakers online.