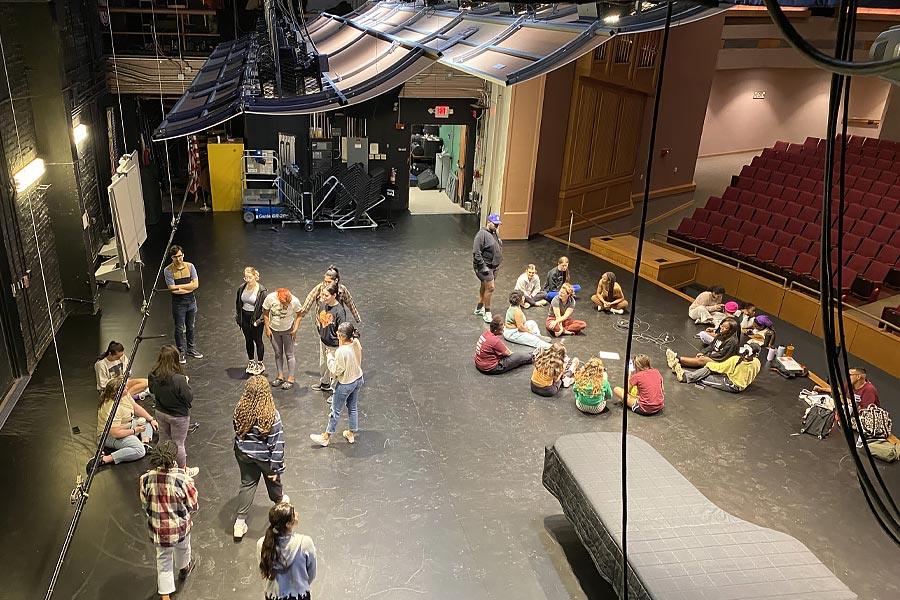 Oct. 10, 2022 – DENTON – The theater has long been described as a magical realm that transports audiences and entices performers. Actress Greta Scacchi described it as "a sacred space."

It’s also a world of cables, electrical panels, breaker boards and lights, of spiral staircases, ladders and narrow passageways winding around and through workshops, of storage spaces and dressing rooms and green rooms, all governed by stage etiquette.

The TWU Division of Dance’s 2022-23 class was recently immersed in that world during an afternoon orientation inside the Margo Jones Performance Hall in preparation for the DanceMakers concert Nov. 17-19.

“It’s a lot of information in a really short amount of time,” said Dayna Ballenger, technical director and production coordinator. “One of the biggest goals is just to get them acquainted with the space and the things in the space, so when they come back in a few weeks it’s not all brand new and unknown.”

The dancers split up into groups and traveled through five stations of the orientation: down stage, up stage, dressing rooms, green room, and house and lobby. The tour covered production methods, maintenance and instrumentation, lighting, and working the front of the theater.

Pulling the curtain back to see how a show operates can be intoxicating, but on this day there was a primary message repeated over and over.

"How to be safe," Ballenger said. "The biggest thing is to keep them safe and to keep each other safe. If they learn extra things along the way, awesome. It’s a magical space, but it’s also dangerous."

If you ever get the chance to be backstage, you quickly understand why it can be hazardous. Everything backstage is black – floors, walls and stairs. Not just black, but flat, light-absorbing black. Nothing to reflect light toward the audience, nothing to disrupt the performance. Even the crew members wear all black.

"It can be dangerous," said Ermir Bejo, manager of the Margo Jones Performance Hall. "We really stress safety. We do $6,000 a year for certifications. Look at the rigging, the power, to make sure everything meets safety standards, and we do that every year."

In fact, Bejo explains, COVID was a blessing for Margo Jones. With performances suspended, the hall got new carpet, a new stage floor, and technical upgrades.

As adamant as the orientation was about safety, there was equal emphasis given to theater etiquette, the rules that govern behavior during a performance:

“A day like this is just a first introduction," Bejo said. "It’s a very relaxed atmosphere, very friendly, so when they come back in five weeks they’re ready to put on the show."

The dancers and choreographers will return to Margo Jones on Nov. 13 for the start of tech week. The theater’s stage and lights will be set up on a fast-paced Sunday. Costumes will be seen under stage lighting for the first time. Each dance work will be rehearsed on stage on Monday, followed by a full run-through on Tuesday, dress rehearsal on Wednesday, and opening night on Thursday.