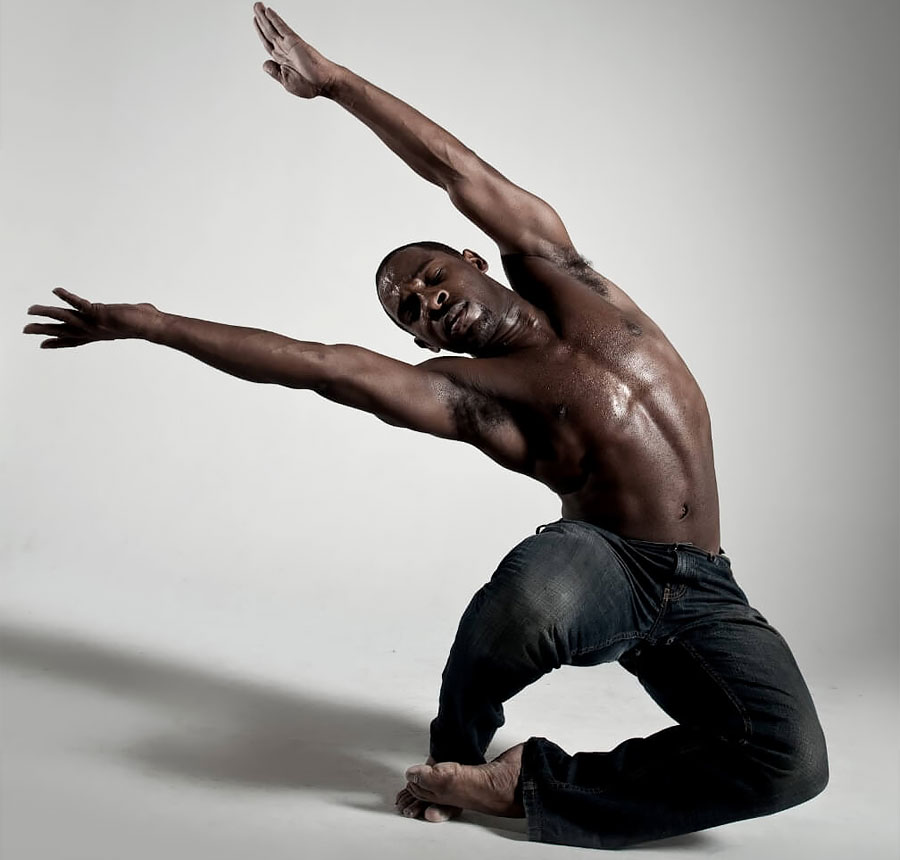 Iquail Shaheed, who earned his PhD in dance from TWU this summer, embraces joy in his dance and writing.

The 38-year-old dancer has an illustrious résumé. He has performed professionally with Compagnie Thor in Brussels, the Sean Curran Company, Ronald K Brown/ Evidence and the Fred Benjamin Dance Company. He has been in Broadway productions including Hot Feet, The Lion King and Purlie, and in film and television. He is founder and executive artistic director of his own company, Dance Iquail.

But it's rare for him to perform standing still.

This summer, Shaheed went before an audience of more than 100 people – some on zoom and some in person – on the Texas Woman's University campus to present his dissertation before defending it in private session. Then he was excused for the committee to consider its judgement.

"I didn’t even have enough time to wait for the elevator to take me downstairs," Shaheed said.

A few minutes later, the verdict was rendered.

"I am a doctor of dance," Shaheed said. "A doctor of joyous dance. I'm so excited, I can't believe it."

Even at a university that prides itself on diversity and inclusion, there remain barriers to break. Shaheed shattered one of them when he became the first Black male to earn a PhD in dance at TWU.

"In the field of dance, a lot of the doors early on were opened by women," he said. "University dance programs were started by women. The continuation of that legacy is where TWU is situated, where this dance program continues to push boundaries of inclusivity so that a Black man can come to the university and write a dissertation. It's not lost on me that had those pioneers – to use that word purposefully – not built this program, perhaps I wouldn't have a chance to get a PhD in dance.

"There are not many PhDs in dance. I'm grateful to be a pioneer, to walk in the footsteps of other pioneers."

Shaheed's research and dissertation were on another dance pioneer: choreographer Milton Myers, who lives and works in New York City. Myers is resident choreographer and instructor for PHILADANCO! and is on faculty at Alvin Ailey American Dance Theater, the Ailey/Fordham B.F.A. program, Peridance, STEPS on Broadway, The Juilliard School and at Jacob's Pillow, where he has coached and mentored dancers for 36 years.

"In scholarly textbooks, there's not much written about him," Shaheed said. "Doing the research, the history, the interviews, what came up was the title of his work called "Joy." All of my interview participants kept using the word joy. Not relative to the piece, but feeling joyous. His generosity. Talking about him. I then used joy as a method as a theoretical framework to analyze Myers, and to argue that all of his work was always about joy.

"He has been working for the better part of 60 years, and has always worked in joy," Shaheed said. "Part of the reason I wanted to write about him was to say, joy is a thing to use as a connection, as an inspiration, as an outcome. Here is an artist to pay attention to, to what he has been doing, and how it opens up that all of us seek and want joy, especially in a society that'd often so polarized."

Shaheed's life had long been building to this moment, and his academic history is as impressive as his professional.

As an educator, he is on faculty at The Ailey School, Steps on Broadway, and Harlem School for the Arts. He has taught at Alonzo King’s Lines Ballet School, Centre Stage, the Philadelphia High School for the Creative and Performing Arts High School, and Purchase College – SUNY, and internationally throughout Europe, Africa and the Caribbean.

Going after a PhD seemed only natural.

"I always wanted one since I was a kid," Shaheed said. "There is so much I can do in my community, being a Black person from Philly with a PhD. How it can teach the world in general, just different cultural connections, cultural contexts, document those works in various ways. To bring attention to the way my community has been working. But also to teach in academia. I'm still a professor. Now I also have the knowledge to conduct and write research to reach more people. The PhD was less about being a doctor and more about acquiring the skills that will allow me to communicate and document people's works."

Shaheed's path to a PhD was made possible by TWU's low-residency program, which allows students already deeply involved in their careers to pursue a PhD without taking time off from work. Shaheed's schedule included traveling, touring and performing, as well as teaching in New York City and at Goucher College in Baltimore, Md.

"I would not have been able to do this if that was not an option," Shaheed said. "I'm forever grateful, and hope TWU will keep a low-residency option for the PhD program."

TWU had another asset no other school could match.

"The other reason it was only possible at TWU was because of Dr. Rosemary Candelario," Shaheed said. "I firmly believe that had I gone anywhere else and not had her as an advisor and teacher, I'm pretty sure I would not have passed. I had deaths in my family. I was going through a tumultuous tenure process. I was trying to get my own choreographic work off the ground. I was raising two kids, trying to get them through college. There were times when Rosemary challenged me and pushed me to do the work and be better, but her way of teaching through care and generosity is really the only other reason I'm able to say I have a PhD from TWU."

"Mentoring Iquail over the past six years as he has grown into a dance scholar has been one of the most rewarding aspects of my job," she said. "His dissertation has the potential to shift how we in the field think about Black men in American concert dance as well as how we think about the Horton legacy. In addition, I see Iquail paying it forward by mentoring some of our first year PhD students by sharing his experiences and lessons learned."

"She carried me when I needed carrying," Shaheed said.

That's not just a figure of speech or reference to lifting one's spirit or mental health. There was some very literal carrying Shaheed required.

In 2017, while performing on stage in front of a thousand people, Shaheed ruptured the Achilles tendon in his right leg.

Shaheed didn't collapse on stage, but the pain of such an injury has been described as instant and severe. And debilitating. He had to learn to drive with his left foot, and underwent a year of rehab, unable to put weight on the injured leg.

"I was rolling around on campus on a little scooter," Shaheed said. "I would have to roll through the heat of a Texas summer on a scooter with a plastic bag on my leg to make sure sweat didn't get in. It was just miserable. My cohort would take the scooter and help me carry it down the steps, and Rosemary would get me a rolling chair so I would roll throughout the building."

Unfortunately – and spectacularly – things got worse.

One year later, just two days after his doctor cleared him to resume full activity, he ruptured the Achilles in his left leg.

"The second time, I was teaching a dance class," Shaheed said. "I didn't want to freak out my students, and in turn freak me out, so I just had to shrug it off. But I said to myself, you've got to be kidding."

Another year of rehab and scooters followed. His recovery finally ended in fall of 2019.

"I worked for this," Shaheed said. "To get to this moment of joy, when joy was the dissertation, I had to go through a physical and emotional process. But, needless to say, I found joy."

Joy that spread rapidly to his family. Shaheed is the first person in his family to earn a PhD.

"They're all beaming," Shaheed said. "They can't stop calling me. My win is their win."

It's also a big win for the dance community, expanding the influence of Shaheed beyond the stage and the classroom.

"It gives me the opportunity to talk and write about my work," he said. "A lot of my work is social justice focused and bringing attention to voices that often aren't heard. This adds more ability to bring those voices out. People who had been incarcerated, people who struggled with physical, emotional and psychological challenges. And be able to do that in writing and in performance that I wouldn't have been able to do prior to having a PhD, and traveling the world and doing that work and collaborating with different communities and writing about what those collaborations mean. Having it be available in dance-history textbooks so we can teach these things in college or community settings in ways that wouldn't have been available without a PhD. It's already starting to happen."

Shortly after word of Shaheed earning his PhD, he received two offers to bring his company.

"It's so many different emotions wrapped up in one," he reflected. "It's an honor to do I, but I'm also sad because there are probably scores of Black men who couldn't reach these heights only because of perhaps HIV and AIDS or social issues that kept men in dance from living into their later years. I carry all of that with me. The pride of carrying their legacy, of opening the door for others. It's all of those things wrapped up in one.

"I guess the only word I can describe it is, joy."