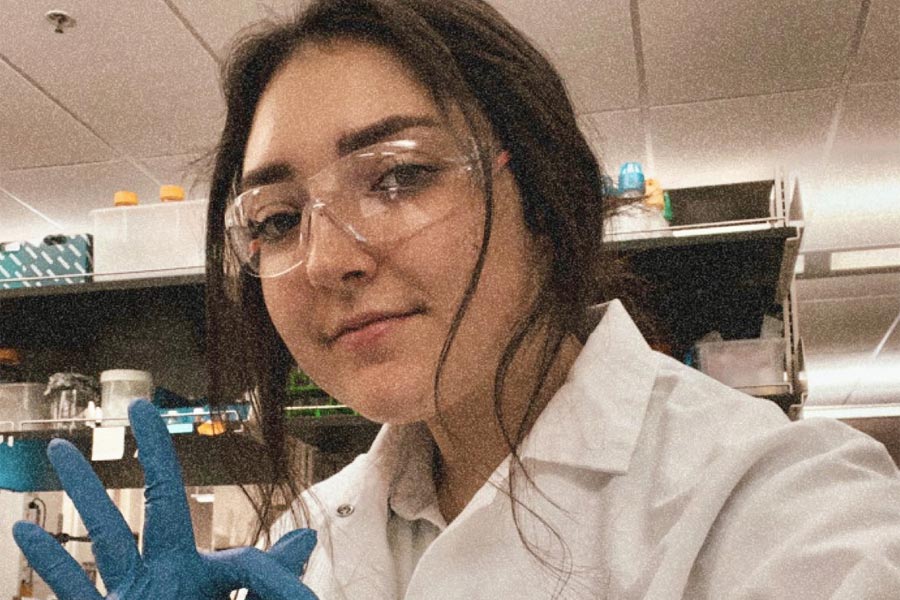 Jan. 24, 2023 – DENTON – If you want to find the pinnacle of American military research, travel east from Dayton, Ohio, to Wright-Patterson Air Force Base. Originally named for pioneering aviator Wilbur Wright, it's the largest Air Force base in the United States, and located within its 12.5 square miles is the headquarters of the Air Force Research Laboratory.

Among its researchers is biochemist Dr. Svetlana Harbaugh, who last summer was looking for assistants for her work on biosensors. She needed someone who knew laboratory techniques in biochemistry, synthetic biology, and biomedical engineering.

After winnowing the field of 170 applicants down to 60 highly qualified candidates, Dr. Harbaugh didn't choose someone from one of the illustrious institutes of technology like MIT or the STEM-renowned universities like Stanford, California Berkley or Texas A&M.

"I asked her why she chose me out of all of those people, because I was kind of surprised," Ruemmele said. "She said that my research experience was really impressive. I had a lot of techniques related to microbiology down, and she was impressed by the variety of different instruments I knew how to use and my lab experience. And a lot of my research experience was at TWU. It's really cool that they chose me even though I didn't go to a huge university.

"It shows that the education I'm receiving at TWU is quality," Ruemmele added. "I was very proficient in the lab, I was able to be independent, and I knew all the things that I needed to know. That just goes to show you that the research experiences, especially in the Chemistry and Biochemistry Department, are really important. All of the teachers in my department are very supportive. Because of that, I'm getting a better education. And because I'm getting a better education, I'm more proficient and able to do these difficult research projects."

Ruemmele, who also earned a scholarship from the Texas Space Grant Consortium for undergraduate STEM majors for 2021-2022 and 2022-2023, was appointed to the Repperger Research Intern Program, named for the late Daniel Repperger, a scientist who mentored students during his 35-year career at AFRL. It's a highly competitive process, not only for students but also for the researchers to have their programs included.

But in addition to the valuable scientific experience, Ruemmele had another goal in mind.

"I applied to this research project because I was very interested in being mentored by a female scientist," she said. "I wanted to understand what her experience was like in the Air Force. I knew that AFRL was very prestigious, probably the premier research lab in the military. They are really on the cutting edge of science in all fields. Working in a government lab is a lot different than working in academia. There are a lot of different rules."

Upon her acceptance, Ruemmele joined Harbaugh in Dayton with the 711th Human Performance Wing, the Airmen Biosciences Division, Optimization Branch, where she worked for three months.

"There was a lot of success in the project, and that was really cool to see."

The project sounds like the stuff of science fiction. Synthetic biology. Biosensors that measure – in the field – hormones released in the body to detect when someone is fatigued or stressed.

"One idea is to have a wearable device," Ruemmele said. "It's not necessarily about injury, but it's about being able to assess human performance so that soldiers are able to perform the best that they can.

"There's still a lot of work to be done."

Ruemmele's journey to a biochemistry career began in Clear Lake City, Texas, a hotbed of science, technology, engineering and mathematics (STEM). The suburb on the southeast side of Houston is in the midst of one of the biggest concentrations of high-tech industries in the world, including NASA's Johnson Space Center, Boeing, Lockheed-Martin, and medical and petrochemical companies.

That sounds good in theory, but in practice it makes for a pressure cooker of an educational environment.

"I was often overlooked because I was pretty shy," Ruemmele said. “Where I grew up and went to high school was incredibly competitive because there's such a high concentration of people there whose parents have graduate degrees.

“There is a concentration of medical professionals, scientists, engineers, people that work for NASA, and then their children. They grow up with this value for STEM and this very competitive nature. A lot of students I went to high school with were top competitors for very prestigious programs like MIT and Rice. Growing up in that environment is kind of intense. Only the top of the top really got any opportunities in my high school, and I was not one of those people, so I never really knew my own potential. I found it very interesting, but I never really considered myself smart enough to pursue science.

"Then I had a high school chemistry teacher who was a woman, and she was a really awesome teacher. She majored in biochemistry. I started to realize I actually am smart. That was the first time I had the idea that I wanted to major in biochemistry or chemistry. When it came time to apply to colleges, the only majors that interested me were science. I was really good at chemistry and I thought chemistry was really cool, and so I decided to apply to that department."

Her pursuit of biochemistry and a supportive environment brought Ruemmele to TWU. She took introductory courses with Richard Sheardy, PhD, and a physics class with Nasrin Mirsaleh-Kohan, PhD. Through a recommendation from Kohan, Ruemmele got an internship at the University of Tennessee, which was where Kohan received her PhD.

"It kind of started more of a dialogue between us," Ruemmele said. "Dr. Kohan invited me to be on her research team after I returned, and I started to see myself as a scientist after I had gained that experience, and I had more confidence. I really feel like the mentorship aspect was really what motivated me and helped me believe that I could do this. As I moved forward in my degree, I realized that it was a very supportive environment. If I had a question about anything or if I needed someone to talk to about my degree and the next steps, there's always a faculty member that I can go to and talk to.

"This environment here is very supportive for women in STEM, and that was a huge deal for me because I had not yet built up my confidence. Being at TWU with primarily a female class really helped me to feel comfortable and grow my confidence. If I hadn't had that experience here, I don't think that I would have had the confidence to apply for these programs."

Ruemmele will graduate with her bachelor's degree this spring, and from there she plans to pursue a PhD, applying ultra-competitive universities like Duke, Vanderbilt and some Texas schools. She's also applying for the Department of Defense Smart Scholars Program, which pays for graduate school if the student does their post-doc at a DoD facility. Again, it's a highly competitive field.

But this time she's better equipped to engage the competition – and significantly more confident.

"It's kind of funny," Ruemmele said. "Because I've done research in the human performance wing of the Air Force, my parents are like, 'That's very applicable to NASA, and why don't you apply to go to NASA?' Yeah, they might want me now that I've done this."

Amazing what she could accomplish with hard work in TWU's supportive environment.

"I'm very happy with my decision."