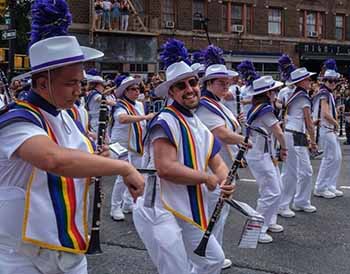 This year marks the 25th anniversary of the inaugural semester when males were able to enroll in all programs at TWU, launching the university as fully coed. This historical event allowed future students, like Luis Rendon, to receive his bachelor’s degree in English in 2010. Rendon, a senior designer at the New York Post and natural storyteller, is committed to telling the story about this critical turning point in TWU’s history.

What event has shaped and/or influenced your current professional life?

I never in a million years would have guessed that all my time spent at The Lasso offices would have set me up for my future in the news media business. I was a freshman looking to make some money when I applied to work at The Lasso, and it quickly became the center of my TWU solar system. I learned how to design a newspaper in that office, and I did not even know it. I also learned how to budget a newsroom, literally crunching numbers and reporting to a board about how we wereusing funds, and how to hire and manage a team of reporters and editors, which I still do. Most importantly, I learned how powerful it is to have a platform and what a great responsibility it is to use it. TWU's motto is "learn by doing," and my god, did I ever!

Did a TWU professor inspire you? Who was that and how was that person inspirational?

There are a lot of answers to this question because truly it took a community of amazing people at TWU to get me where I'm at today, but I really wouldn't be here without Annie Phillips, who is now the executive director of International Affairs at TWU. I first met Annie as my speech professor, but it was when she became the advisor for The Lasso that I really got to know her and became inspired by her.

Anyone who knows Annie knows that she is funny and kind, but the greatest gift she gave me was the confidence to go after what I wanted. I had this crazy idea to buy a couch and put it in The Lasso offices. She said, "Yeah, let's go get it!" And we did! We hauled a couch in Annie's car, unloaded it and trudged it up into Stoddard Hall like it was no big deal.

But it was. I had a vision of what I wanted the office to be; a place of community where people could hang out. She believed in my vision, not only at The Lasso, but in life. That's a small example, but it's really representative of how she inspired me to think big and not to limit myself with my aspirations. I witnessed how she had taken her life by the horns and how there was nothing not worth at least trying for, because even if you fail, it’s not a big deal and you just keep at it. She will always be a friend.

What is your favorite TWU memory?

Dr. Becky Rodriguez was one of the ﬁrst people I met at TWU. On move in day for Guinn Hall, she and her assistant saw my name and where I was from on a name badge. They yelled out, "Quien es de Laredo?!" Immediately, my parents and I had a bond with these two women who oversaw the [now] Ofﬁce of Diversity, Inclusion and Outreach. They were my people; I joined G-Force and did events with them, and it was great.

At the end of my ﬁrst year at TWU, I was nominated for Emerging Leader of the Year at the Redbud Awards. I was feeling a little bit down because I was still unsure if I should stay at TWU or transfer to pursue a journalism degree. I went through the motions of going to events for homecoming week, and the day of the awards, I laid in my bed fully dressed until the very last minute to attend the Redbud Awards. I knew I wasn't going to win, because, how could I? I knew so many talented and deserving friends who were nominated, and I was just in a funk. My mom called me and said, "Isn't it getting late? Don't you need to be at the awards?"

I got up and walked over to Hubbard where the ceremony was. It was packed with people, but I saw a ﬂash of someone—my dad. It didn't make any sense because my parents lived eight hours away in Laredo. But there he was again. It was my dad, and my mom too! Becky had secretly invited my parents to the Redbud Awards. I thought, "Oh my god, why'd you guys come all the way up here just to see me lose?" I think I even said out loud to everyone at my table, "There's no way I will win."

Becky and TWU gave me a great gift that day, both in the form of an award, but also in being able to share that moment with my parents. It's as close to a magic movie moment I'll ever have.

Has something about your TWU education surprised you since graduating?

I think a lot about my English degree. Even though I don't use my degree the practical way a nursing major uses their degree every day at work, I think I use my degree in almost every other sense. I use it when I watch movies, read books, meet people, work with my staff—it enhanced my capacity to be human and to empathize. Those are the soft skills that not only are great for the workplace and being hirable, but also just being a fun person to be around. It's really something to realize that you didn't just go to school to get a job, but to become the best version of yourself. And that's surprising!

What makes an effective leader?

It really comes down to surrounding yourself with smart people, realizing that you will not always be right and that you should listen to those smart people sometimes. Don't let your ambition and ego run wild or go unchecked.

What do you enjoy doing in your free time?

I play with the Lesbian & Gay Big Apple Corps here in NYC, and it's so much fun. I think music will always be a part of my life.

I also love telling stories. I started producing a podcast about my family and our history, called Casa Rendon. I'm currently working on a project to tell the story of the TWU students who protested after the Board of Regents voted to make the school coed. It's the 25th anniversary of men enrolling in all programs at TWU this year. Beyond my obvious connection to the story, I think these women and the protest is an important part of the school's history that doesn't get talked about enough. I'm excited to ﬁnish my reporting and writing to get that out into the universe. I have interviewed 22 sources so far and hope to ﬁnd a home for the project soon.

What advice do you have for college students hoping to succeed professionally?

I like to say be prepared, but don't ever take anything too seriously when it comes to your career. Work is important; but don't let anyone tell you your job is the most important thing in your life.