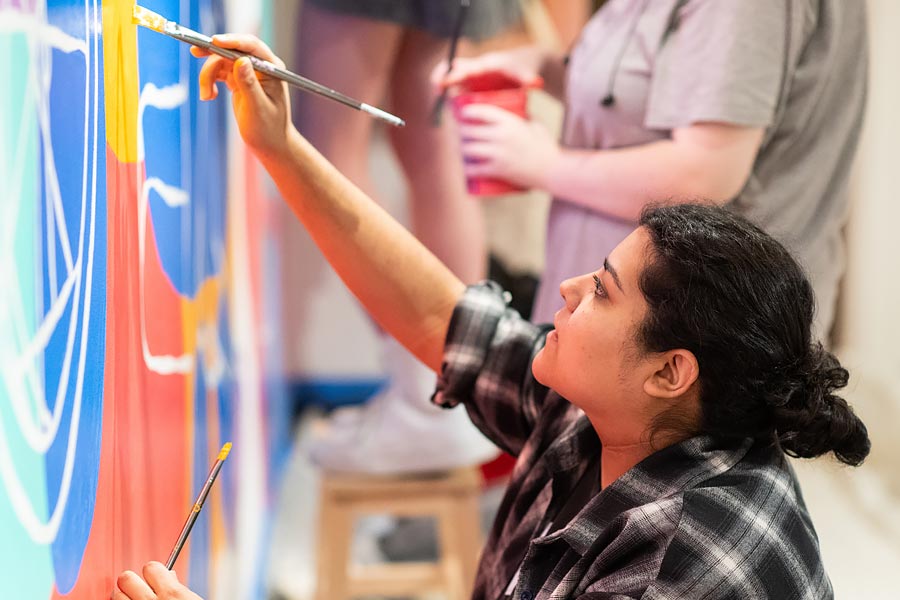 Nov. 28, 2022 – DENTON – If you find yourself walking through the Student Union at Hubbard Hall, you'd be forgiven for ignoring its walls. Giant slabs of white occasionally interrupted by maroon. Nothing worthy of notice.

But if you're on the first level, head east from the food court, down the hall past the game room, computer stations and meeting rooms toward the gallery around the stairs. You will find color. An assault of color. Great, vibrant swaths and shapes of pink and orange and red, blue and turquoise, yellow and purple splashed on three sides of the gallery and wrapped around the beating heart of the university.

The mural is the product of a Visual Arts class taught by professor Giovanni Valderas.

One color is conspicuously absent from the palette: maroon. The mural is not so much a mutiny against TWU's primary color as just a little…fatigue.

"During our whole design process, we tried to keep in mind who the mural was for," said Martha Sarinana, one of the designers of Corazón Radical. "Obviously, it's for the school, but we didn't want to do just another historical thing. We focused a lot on students’ opinions. We asked, do you want school colors or do you want different colors? A lot of people said make it bright, make it inviting. That's what we did.

"We weren't trying to sell the school," Hill said. "We were trying to celebrate it."

Valderas' vision for the project was to present his students with the kind of situation artists face every day: a commission from a client. Anyone who's seen The Agony and The Ecstasy, the film about Michelangelo's creation of the mural on the ceiling of Sistine Chapel in Rome, would recognize the process that resulted in Corazón Radical.

"I ran the class like a real-life proposal, like what you do as an artist," Valderas said. "You respond to requests for proposals."

Valderas had a few ideas of possible locations but wanted to keep it on campus. Fortunately, Arin Nacis, coordinator of Student Union operations, gave permission to use the union's first-floor gallery.

From there, Valderas created the project criteria: the physical location and what the client envisioned in the space. The class was divided into four groups and each drew up a presentation that included their artistic vision and a budget, then presented their proposals to a committee of administration personnel, students and outside professionals to select one of the murals. The committee chose the proposal of the team that dubbed itself The Free Radicals: Gabriela Puente, Elisia Hill, Sahian Salas, and Martha Sarinana.

The Free Radicals' project features a heart surrounding the stair case ascending from the middle of the gallery, with colors on the surrounding walls beneath outlines of a variety of student representations.

"The heart is in the center," Valderas said. "The idea is you are walking into a new future, and it's also the idea of a campus with the heart. They wanted to make sure one of the criteria was that diversity had to be reflected in the mural. So you see a lot of different ethnic backgrounds, but also people with disabilities, sports players and things like that. They wanted the students to see themselves reflected in the mural."

"We didn't want to go with the traditional university colors of maroon and white and black just because we didn't want it to blend in with the space," Hill said. "We wanted it to stand out and really be a huge pop of color that would attract attention and curiosity. When I was doing research about different murals, I saw a lot of Latin artists with very graphic styles, and that's a lot of what I love. I really love graphic styles and bright colors and a childlike sense of color. Very bright colors that didn't really go with the rest of the building to really stand out and make people stop and stare."

With a design and budget approved, the creative process began with setting up a grid, a system used since the time of the Renaissance. From there, the entire class joined in the project, setting up the grid on the wall and laying the outline of the mural on the walls.

"They did a grid on the original drawings, one inch by one inch squares," Valderas said. "Students then went in and followed the design on the larger grid. So if you're working on, let's say, grid number 98, you look at your page on grid number 98 and you stick to that and draw it in."

"The largest I've done is 24 by 36," Puente said. That's 24 by 36 inches. This canvas is 36 by 36 feet. "I had done grid work before, but never to this extent, enlarging it this big and everyone trying to match it at the same time. There were things we changed a bit just to make it a little more sense."

With the outline complete, the class began painting. Sixteen students participated over two weeks, approximately 30 hours. Much of that painting is done on knees or on ladders, with arms overhead or dangling over staircase railings.

You're sore, you're tired," Sarinana said. "The fumes make your eyes dry. But every time you see more of it painted, you realize we're actually doing this."

"It's very much a passion project," Hill said. "It's just a lot of our heart and souls are in it."

Unfortunately, Corazón Radical will not last. It was understood from the start that the union would paint over the mural at some point.

"It's a little heartbreaking to know that it's going to be gone after we're finished," Salas said. "But it's something you learn as an artist, especially with public art. It's bound to be taken down. It's bound to be torn down or just to deteriorate with the environment. It's something we have to accept, but we just hope everyone enjoys it while it is up." 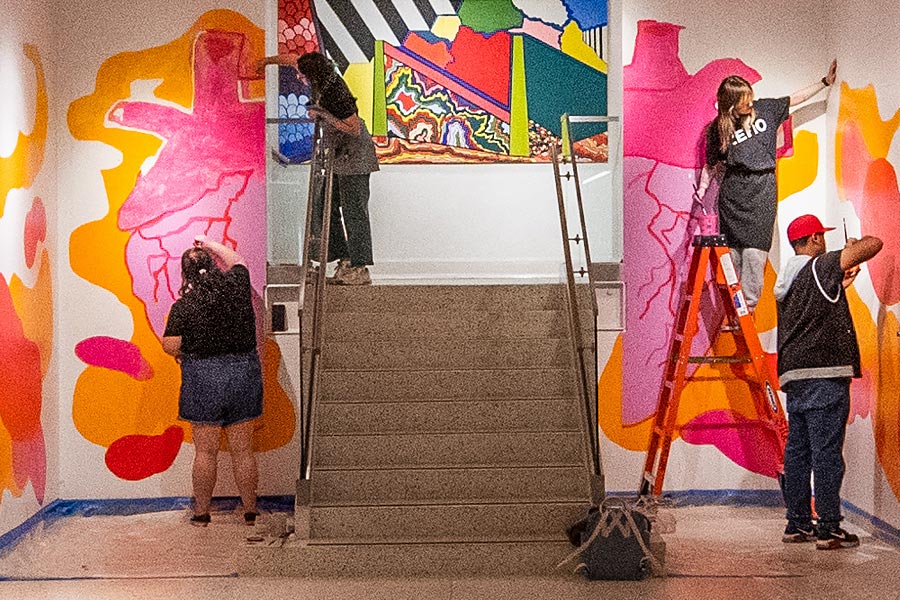 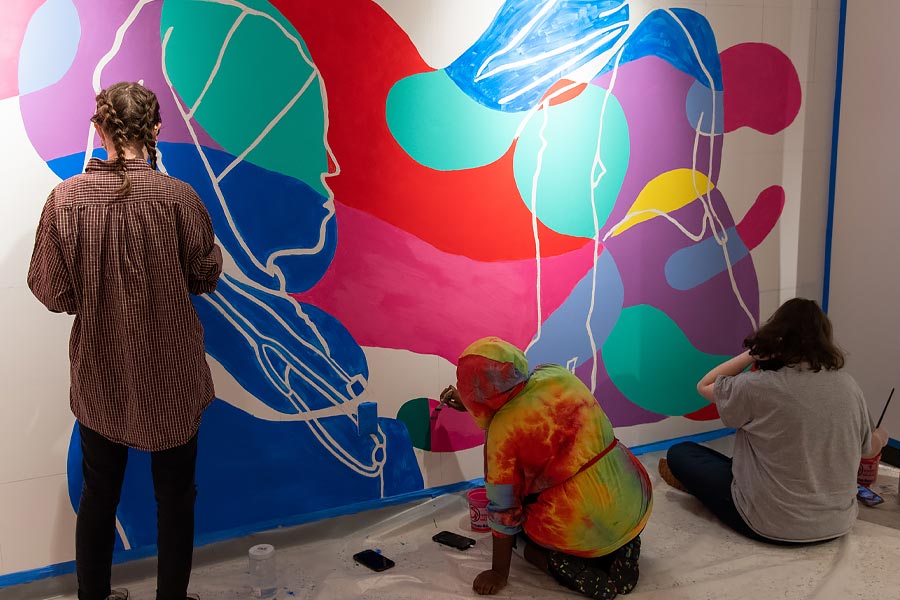 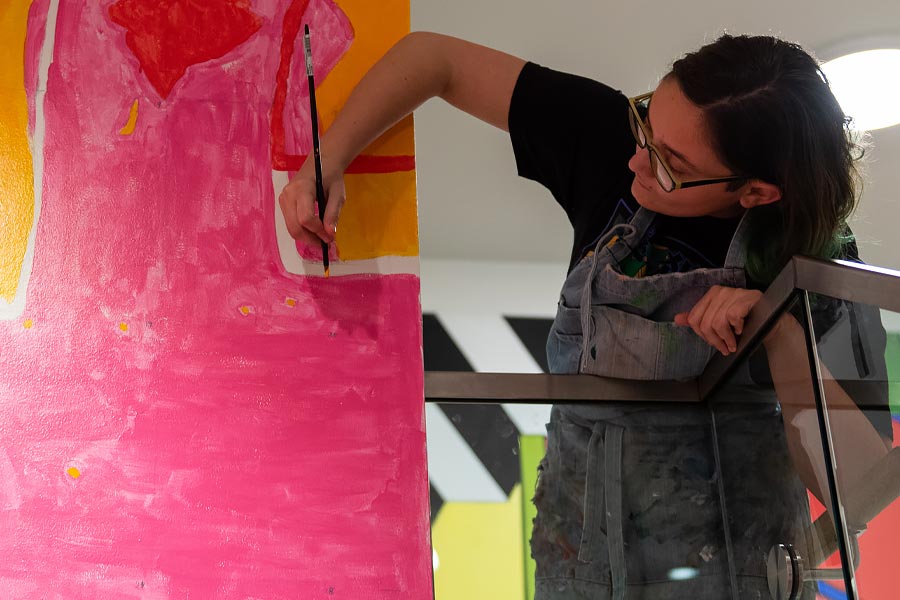 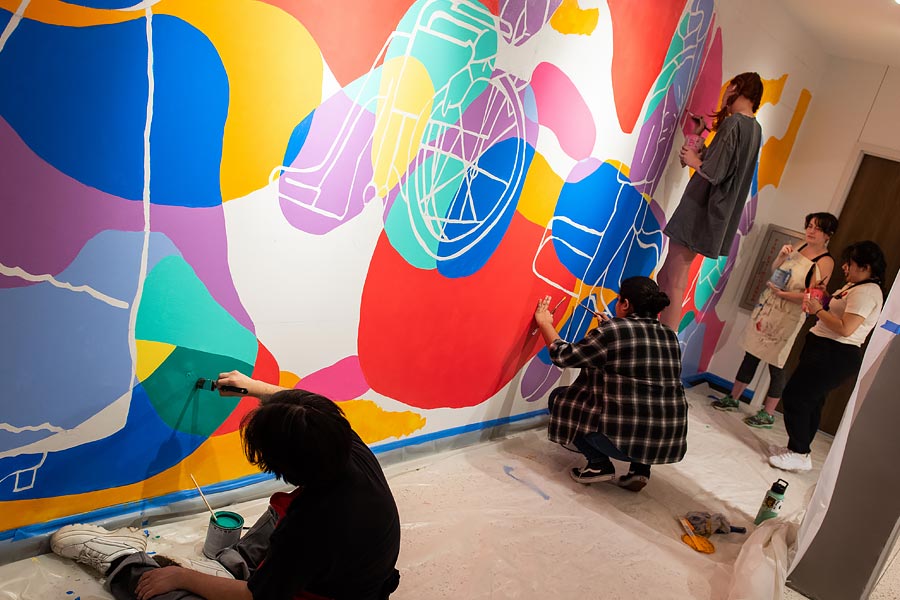 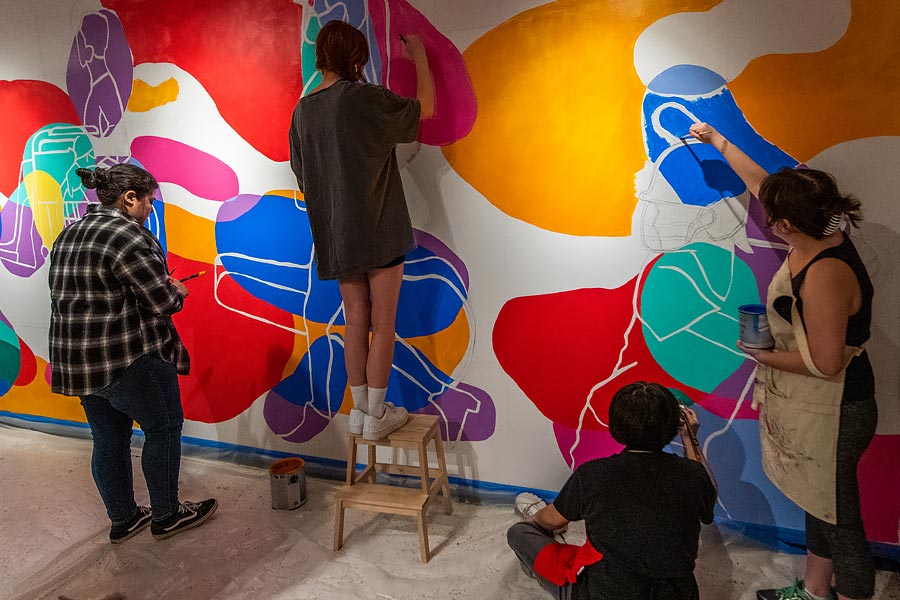 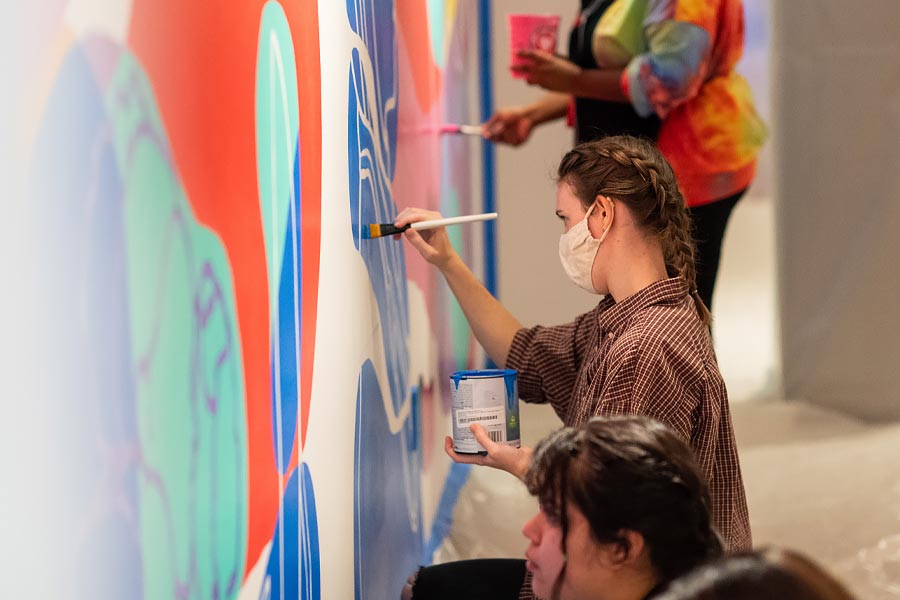 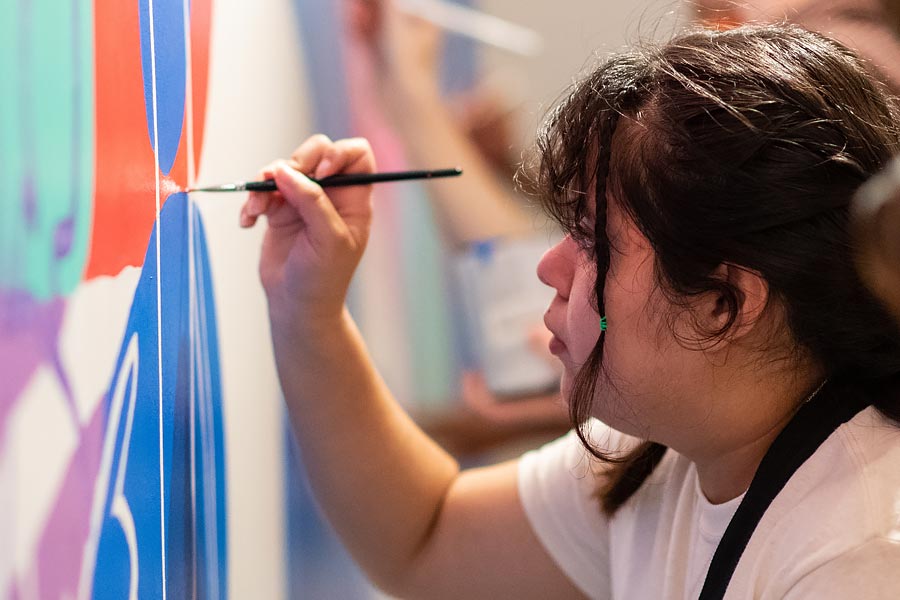 Send us your news or success story