Evidence-Based Practice: Demonstrating Your Worth

A colleague and I recently studied 111 school librarians’ application of EBP and the extent to which they share EBP data and with whom. The participants, all public school librarians in the state of Texas, completed an online survey answering both closed- and open-ended questions. The majority of respondents indicated they did indeed participate in some part of the EBP process. The most common components in which they engaged were (1) reading professional journals and applying knowledge gained; (2) referencing national guidelines and state standards when developing library programs; (3) collecting informal data, such as observations and circulation statistics; and (4) writing mission statements. Respondents’ most infrequent behaviors included consulting scholarly research, collecting data linking the school library program to student learning outcomes, and developing long-range plans, three of the most important components involved in the EBP process to link the library program to student learning outcomes. Respondents were most likely to share goals and data with administrators and teachers with the intent of gaining, increasing, or securing something, such as support or funding, of providing information, and for planning purposes.

This study did not review the entire EBP process in the context of practicing school librarians but rather on specific components of the process, as stated above. A more detailed article can be found in the most recent issue of School Library Research, volume 17.  Although this study focused solely on school libraries, EBP is applicable to all library types.

The San Antonio Public Library sponsored two events in November 2013: (1) The American Indians in Texas at the Spanish Colonial Missions (AIT-SCM); and (2) The Cherokee Township of San Antonio. Part of the mission for both is to raise awareness of tribal culture and hopefully illuminate fact from fiction. We are extremely grateful they introduced themselves to the library community and helped clarify misconceptions about American Indians. As such, AIT-SCM showed the film A Thousand Roads (Eyre 2005) and led a discussion. Cherokee members taught traditional bracelet and cornhusk doll making and spoke on history and heritage.

I.  A Thousand Roads and Discussion with the Coahuiltecan of Texas

Isaac Cardenas, AIT-SCM Program Director (Tap Pilam Coahuiltecan) drummed a call to the spirits for ceremony. He and Chief Ramon Vasquez y Sanchez (Aueteca Pagume Band) told us Chris Eyre (Cheyenne/Arapaho) directed the project for the National Museum of the American Indian grand opening in Washington, D.C. It is a fictional drama showing the demands of modern life. For instance, a Wall Street broker reawakens to the Mohawk language and values. A teen is torn between gang loyalty and ancient Navajo teachings revealing a different path. When a mother is deployed to Iraq, her daughter joins family in Alaska – seemingly a foreign land until affection, humor, and Iñupiat ways capture her heart.

During this segment, narrator John Trudell (Santee Sioux) mentions that whaling is not sport. Instead, a whale selects the hunter and thereby affirms that both “destinies are intertwined” with the supplier of life. Afterward, we discussed how Iñupiat beliefs contrasted with the idea that man owns dominion over creation, which led to a discussion of the sports mascot controversy. One man wondered why the “Redskins” football team name is offensive. He felt baffled since no derogatory meaning was intended. Why not appreciate the gesture of respect for courage in battle and ferocity, he asked.

The presenters raised several points against such representation. For one, they suggested we consider the reality that no other group within humanity is portrayed as a mascot, and yet non-Indians do not find that strange (Spindel 2000). Isaac also held up his copy of Do all Indians live in tipis? within which American Indians offer short but detailed correction to established assumptions (National Museum of the American Indian, Smithsonian Institution 2007). Our library has since acquired the book.

Furthermore, finding resources citing Coahuiltecans in modern San Antonio is challenging. Therefore, Isaac and Ramon demonstrated the dominant culture’s version of history could be incomplete (Coahuiltecan Indians, 2010). Indeed, some allege that none remained in Texas by 1850 (Coahuiltecan Tribes, 1999, 11), while others report the extinction of all tribal bands (Coahuiltecans, 1995) .

Conversely, a master’s thesis based on primary sources and personal interviews with tribal members distinctly proves that Coahuiltecans live and thrive in Texas (Logan, 2001). Likewise, another descendant of the Spanish Colonial Mission Indians counters the majority view (Killian, 2007, n.p.).

Finally, people eagerly shared their genealogies. One has family on the Tohono O’odham Reservation in Arizona. Another said it is frustrating to verify their Apache ancestry. Many said they have no tribal roots. Nevertheless, Cardenas and Vasquez y Sanchez indicated all humans were indigenous and related at one point somewhere on the globe. Cardenas closed with a benediction on the wooden flute, but attendees lingered with further questions.

Secondly, we welcomed the board of the Cherokee Township of San Antonio (chartered by the Cherokee Nations in Tahlequah, Oklahoma in 2012). Al Cummings, Roger Mays, Linda Flores and Jamie Edson began with historical facts and cultural edification. Meanwhile, Cindy Cummings engaged the girls (and won over the reluctant boys) in bracelet and cornhusk doll production.

First, Al Cummings (Director) revealed that over 700 registered citizens of the Cherokee Nation live in San Antonio. He relayed a good-humored tale of a great-aunt they called “outlaw” and how his grandfather knew Will Rogers (Cherokee). Of course he mentioned the legacy of advanced farming, the written alphabet and publishing. The 1827 Constitution that created a three-branch government is an evolving document and was recently amended (The Cherokee Nation Constitution Convention Commission, 2011).

Although not Cherokee, Cindy Cummings described the matriarchal society. She quipped that if Al misbehaved she could place his belongings outdoors to formally dissolve the marriage. That got a laugh.

Roger Mays (Treasurer) explained how other tribes merged with the Eastern and Western Bands and united in Tahlequah. For instance, he was born on the Pine Ridge Reservation, is Shawnee, enrolled in the Cherokee Nation with ancestors from the Miami Tribe of Oklahoma.

Linda Flores (Public Relations) delivered anecdotes and a photo of her corncob pipe-smoking great-grandmother. Grandma Gann raised cattle and children (Linda’s father) on allotted land. Her grandpa drove the school bus and then trekked to his cabin on the hill to recuperate.

Everyone enjoyed the crafts and interacting with the San Antonio Cherokees and Coahuiltecans. Consequently, we may not wait for November for a Cherokee language workshop and further conversations with indigenous Texans!

In Memory of Helen Taliaferro, Alumna and Supporter of TWU SLIS

Helen Naomi Taliaferro, age 92, died in Coppell, Texas, on February 23, 2014. Born in Idaho on January 26, 1922, and raised in Ft. Worth, Texas, by adoptive parents, Helen attended Texas Woman’s University (then called Texas State College for Women) where she graduated in 1942 with a Bachelor of Arts degree in Library Science. She was married to Lt Col Lloyd A. “Tony” Taliaferro, USAF, who predeceased her. From 1982 to 1994, Helen was Chief of the Reader Services Division at the Air University Library at Maxwell AFB in Montgomery, Alabama, one of the country’s largest military libraries. Prior to that, she served as Command Librarian for the USAF Military Airlift Command. During her 12 years of service at the Air University Library, Helen distinguished herself by a commitment to university library service that exceeded all expectations.

She was respected as a colleague and loved as a friend. Helen retired in February 1994, but by then she had embarked on a new career as a fiscal supporter of advanced library education for students at her alma mater. By 1996 she had donated over $12,000 for scholarships, and in 2008 the school announced that her estate had established the Helen Naomi Taliaferro Library Science Scholarship Endowment Fund within the TWU Foundation.

Helen is survived by a legion of friends and colleagues in Montgomery, Alabama, and throughout the United States. In lieu of other memorials please send donations in Ms. Taliaferro’s name to the TWU Foundation. 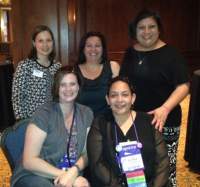 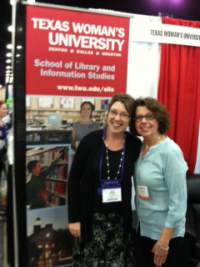 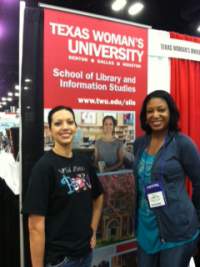 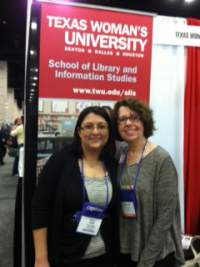 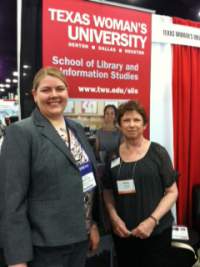 Congratulations to the TWU Alumni who were selected for the TLA 2014 TALL Texans Leadership Institute.  We are proud of you!

Zhixian (George) Yi, 2010 PhD graduate, is a lecturer in the School of Information Studies at Charles Sturt University (CSU) in Australia. In 2011-2012, he was awarded the CSU Faculty of Education New Staff Establishment Grant, Faculty Small Grant, and the School of Information Studies Research Fellowship, which have resulted in several significant presentations and publications. Selected publications and presentations from 2013 include:

As a project advisor/stakeholder, Dr. Janine Golden participated in a planning session for the IMLS(Institute for Museum and Library Services) National Impact of Library Public Programs Assessment grant, which was awarded to the American Library Association. The session was held in Philadelphia at ALA mid-winter conference on January 23-24, 2014.

Along with Dr. Delmus Williams, Dr. Golden edited Vol. 32 of Advances in Library Administration and Organization published by Emerald. The publication date was January 2014.

Congratulations to Dr. Judi Moreillon on being named the recipient of 2014 Mary Mason Lyon Award by the TWU Faculty Awards Committee. The Mary Mason Lyon Award recognizes excellence in teaching, research, and service and the clear evidence in dedication and promise for success in the future.

Dr. Moreillon published “Putting It All Together: Connecting to the Core through Coteaching Curriculum Standards,” a chapter in Inquiry and the Common Core, edited by Violet H. Harada and Sharon Coatney (Libraries Unlimited, 2014). Along with SLIS doctoral student Ruth Nicole Hall, Dr. Moreillon co-presented “Digital Advocacy Stories: Using All the Tools in the Social Media Toolbox” for the Distance Education Special Interest Group at the ALISE Annual Conference in Philadelphia, January 2014.

Dr. Jennifer Richey’s course, LS 5233 Multimedia Resources and Services, recently underwent a rigorous review process and was awarded the distinction of being a Quality Matters recognized course. Dr. Richey co-presented a concurrent session, “What Sound Does an Odyssey Make? Content Analysis of Award Winning Audio Texts,” at the 63rd Annual Conference of the Literacy Research Association, in Dallas, TX, on December 4, 2013.

Congratulations to Dr. Sylvia Vardell, who was recently awarded the 2014 American Library Association Scholastic Library Publishing Award. The ALA press release states: “This special recognition is given annually to a librarian whose “unusual contribution to the stimulation and guidance of reading by children and young people” exemplifies achievement in the profession.”

Congratulations to doctoral student, Elizabeth Enochs for being selected by the Research Committee of the TWU Graduate Council as a recipient of the 2014 Graduate Council Award for Exceptional, Original Scholarship. As a recipient of the award, Elizabeth received a monetary award/scholarship of $1,000 and was recognized at the 2014 TWU Convocation on Thursday, April 10. In addition, she was invited to be recognized and present her research during the 2014 Student Creative Arts and Research Symposium in a session entitled Showcase of Student Research on Wednesday, April 9.

Ruth Nicole Hall, doctoral student, coauthored a peer-reviewed article, entitled “Digital Advocacy Stories: A Pedagogical Tool for Communicating and Strengthening Library Values.” The article appeared in the March 2014 issue of the Journal of Education for Library and Information Science (JELIS).