As the department manager, “my role is to engage, enlighten and excite reference services to a staff of reference librarians and student workers,” says Ms. Kimberly M. Gay, MLS 2006, who was recently promoted to Head of Reference and Information Services at the John B. Coleman Library of Prairie View A&M University. Prior to her promotion, she was the Reference and Instruction Librarian at the John B. Coleman Library.

To do so, Kimberly has introduced several new initiatives at the Coleman Library, including its hosting of “tailor-made training webinars for faculty and staff covering library services and research skills;” providing new structured training sessions in the fall and spring semesters for all library student workers; and adding a new in-house Reference Instruction area equipped with laptops for students to use during instruction sessions led by reference librarians.

The best practices in an academic library information literacy and instruction setting, according to Kimberly, are to “promote life-long learning and build bridges to students’ educational needs through innovation in technology and pedagogy skills. Successful strategies can engage students in online tutorials, online and print LibGuides, smartphone interactions, apps, MP3 journal articles, and embedded eCourse information literacy instructions.  Libraries must continuously assess the values of these practices to ensure students are in active learning techniques that strengthen their life-long learning skills to think critically.”

Kimberly is an active member of the Texas Library Association (TLA) and the American Library Association. She makes presentations at TLA on a regular basis, and she was recently elected as the TLA Academic Representative-At-Large. Congratulations to Kimberly on her new position!

Student Danelle Jefson Benefits from “Grow Your Own Librarian” Program

SLIS student, Ms. Danelle Jefson, lives in Alaska, where she teaches at the middle school in Chugiak, the northernmost school in the Anchorage School District. She began the MLS program in January 2015, and just two weeks later, the librarian position at her school became available when the librarian suddenly moved out of state. Because the district has a shortage of librarians, she was hired as the school librarian via the Grow Your Own Librarian (GRYOL) training program that allows an individual with a teaching credential, who is currently enrolled in a master's or librarian certificate program, to be considered for employment as a librarian while they continue with their coursework.

As a resident of Alaska, Danelle is grateful for the online program at TWU SLIS. “My interest in Library Science was rekindled,” she said, “when I ran into two former colleagues who moved from classroom instruction to the library, where they interact with kids and teachers, helping both. That really has great appeal to me.”

Danelle has lived in Alaska for 20 years and cannot imagine living anywhere else. She is originally from New York State and has lived in North Carolina and California. She moved to Alaska after watching a Discovery Channel special on Alaska, “before every facet of Alaskan life has become a TV series!” Her hobbies include trail running with her two sled dogs, reading (when she’s not taking classes), and spending time on the ocean.

Ileana Lopez-Jimenez on De-Stressing to Keep a Balanced Life

SLIS welcomes our new Academic Advisor II, Ms. Ileana Lopez-Jimenez. Ileana comes to us from the TWU Admissions Office. Prior to that, she attended the University of Houston and graduated with a BBA in Management and a minor in Marketing. She is currently pursuing the MBA at the University of Dallas. With a passion to help students reach their higher education goals, Ileana has worked in the areas of admissions, recruitment, and academics for the last 3 years.

Ileana relates to SLIS students because she knows how difficult it is to work full time and pursue a degree. She stresses the importance of time management and said, “I really had to set a plan for studying and completing assignments on a weekly basis as well as devote all of my weekends to catching up on work. Taking time to de-stress has helped me not get overwhelmed, so I give myself one day a week to do something I love and get my mind off all the work.”

Ileana is originally from Puerto Rico and moved to Texas in 1995. She still feels like Puerto Rico is “home” and goes back to visit twice a year. On a personal note, Ileana is an avid reader, who likes fantasy, sci-fi, dystopian, and action & adventure books. She also likes to travel and tries to go somewhere new at least twice a year. Last year, she went to Indianapolis, NYC (three times), Atlantic City, Las Vegas, Houston, Bastrop, The Valley and South Padre Island, El Paso, and Puerto Rico (twice)!

The new Library Science Alumni Network received a great response at TLA 2015 in Austin! We collected over 100 names of interested alumni, who shared their ideas about how they’d like to stay connected. Things we’re working on now include:

Emails will be going out soon. Any interested alumni, who haven’t already done so, can contact Kelly Meyer at kmeyer2@twu.edu. 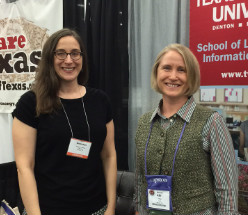 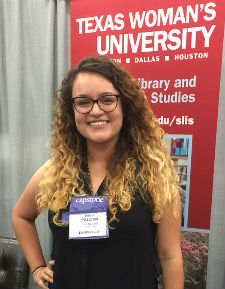 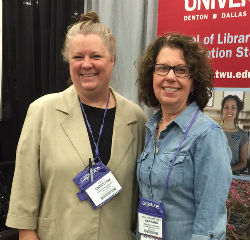 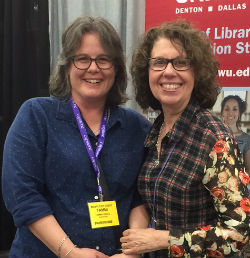 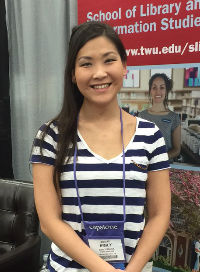 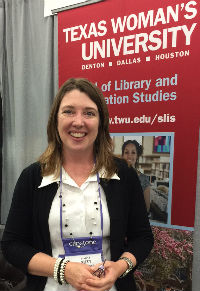 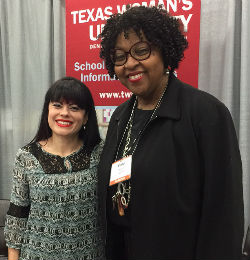 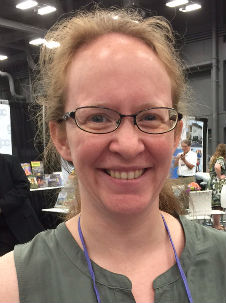 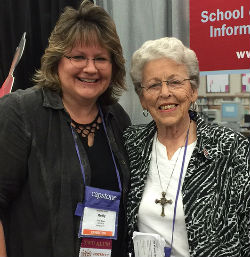 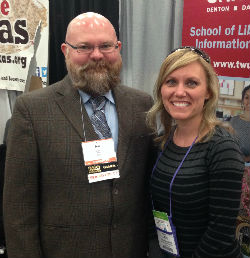 Graduates of the PELSC (Professional Education for Librarians in Small Communities) grant cohort attended the SLIS Reception at TLA in Austin. 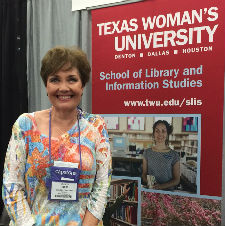 The School welcomes Dr. Aaron J. Elkins, who joined the faculty in Fall 2014 as an Assistant Professor. He earned his Ph.D. in Library and Information Studies from Florida State University, and an M.A. in Library and Information Science and a B.S. in Environmental Science and Policy from the University of South Florida. Dr. Elkins served as a school librarian for ten years, during which time he achieved National Board Certification in Library/Media. His research interests include the roles of school librarians and how their performance is evaluated, students’ access to materials, and how gaming enhances 21st Century Literacies.

When asked about future trends in school librarianship, Dr. Elkins says, “the profession of school librarianship is, in some ways, experiencing a metamorphosis similar to that a caterpillar undergoes to become a butterfly: the dawn of the information age began our transformation, and we have emerged from the chrysalis of Web 2.0, and are now preparing to spread our wings and soar, by elevating the level of instructional practice in our schools and serving the needs of our learning communities as they strive to develop multiple literacies.”

Among his accomplishments, Dr. Swigger helped to create one of the first graduate distance learning degrees approved in the State of Texas. He raised more than $1,000,000 in grants and gifts for TWU. He was the architect of three major curriculum revisions at SLIS and directed 23 doctoral dissertations, making him the 16th most productive dissertation director among all Library and Information Science (LIS) professors. Dr. Swigger has published one book and is working on another book. He published 37 articles and book chapters and 26 books reviews, and he has given over 70 presentations.

The School wishes Dr. Swigger all the best in his retirement and appreciates his many years of service at TWU!

Dr. Lynn Akin published an article, “Bridges Over Transactional Waters,” in Academic Exchange Quarterly (AEQ), vol. 18, issue 2, Summer 2014. This article was also featured as an “Editors’ Choice” for Summer 2014 in the online version of AEQ.

Dr. Gretchen Hoffman made a presentation at the 2015 Association for Library and Information Science Education (ALISE) conference, "Understanding the Elements that Help Students Learn Cataloging: A Research Study.” She also presented at the ALA 2015 Midwinter conference as part of a panel on “Educating Catalogers: The State of the Art.” This session focused on the state of cataloging and metadata education, cataloging course content, balancing of theory and practice, and pedagogical approaches.

Dr. Hyuk-Jin Lee wrote a paper with Valerie Hill (SLIS 2012 Ph.D. graduate), which was accepted for publication and presentation: “Now and Future of Virtual Libraries and Education in Second Life based on Diffusion Theory,” in The International Journal of Communication and Linguistic Studies.

Dr. Eileen McElrath is serving as a University Library Advisory Committee co-coordinator of the Award Process for the 2015 TWU Award for Outstanding Services to the TWU Libraries. She also attended the 2014 University of North Texas and Texas Woman’s University Digital Frontiers Conference in Denton, Texas, September 18-19, 2014.

Dr. Judi Moreillon had several publications and presentations, among her other accomplishments:

Dr. Vardell also served as a judge for the poetry category of the CYBILS Award, Children's and Young Adult Bloggers Literary Award, and on the Nominating Committee for the Children's Literature Assembly of the National Council of Teachers of English.

Congratulations to SLIS alumni who have recently received awards!

Emily Vardell, MLS 2007, was selected as a 2014 recipient of the Association for Information Science and Technology (ASIS&T) New Leaders Award.

Raquel Williams received the 2015 MLIS Scholarship from the Texas Library Association, College and University Libraries Division, and she was awarded the TLA New Members Round Table Student Conference Stipend.

Several TWU Alumni were selected for the TLA 2015 TALL Texans Leadership Development Institute. We are proud of you!

Other Student and Alumni News and Achievements

2014 MLS graduate, Kelly Baxter, was awarded a professional development internship in the Advancement Office of the Smithsonian Libraries, while she was still a student in the MLS program. Kelly spent six weeks in Washington, D.C., in summer 2014 for her internship, and after its completion, she wrote a blog post about her experience for the Smithsonian Libraries “Unbound” blog.

Walter Betts, SLIS adjunct instructor and 1998 MLS graduate, was elected as the President-Elect of the Texas Library Association.

Leslie Drake, MLS student, was honored by TWU SLIS and ALA to represent SLIS as part of the 2015 ALA Student to Staff Program at the ALA Annual Conference in San Francisco in June.

2007 MLS graduate, Lisa Taylor has been named the 2015 ALA ALSC Co-Chair of the Great Websites for Kids Committee.

Ashley Weibling, 2013 MLS graduate, is featured in the cover story, “Dog Therapy 101,” in the November/December 2014 issue of ALA's American Libraries (pp. 30-33). She taught at Savannah Elementary School (Denton ISD) while in the MLS program, and as part of her coursework for the Youth Programs course (LS 5343), she designed a therapy dog program, which was highlighted in American Libraries.

Peace Ossom Williamson was selected as the Association of College & Research Libraries (ACRL) Member of the Week for December 8, 2014. She is featured in a post on the ACRL Insider. Peace is a 2013 graduate of the Dual MLS/MS Health Studies degree program.  She was also recently selected for the 2015 class of the TALL Texans Leadership Development Institute.