Hidden in an inconspicuous box in the special collections vault at Texas Woman’s University’s Blagg-Huey Library in Denton is a stack of x-rays. These, however, are not just any x-rays. They contain images of the hands and feet of nine American astronauts who participated in the early space program and are part of a historical archive linked to a remarkable woman — Pauline Beery Mack, Ph.D.

Since the beginning of its manned space program, the National Aeronautical and Space Administration (NASA) has hired researchers to study the effects of space flight on the human body. One of the early researchers was Mack, director of TWU’s Research Institute. Mack served as a NASA principal investigator specializing in bone density research, a noteworthy accomplishment as it was unusual for women to be brought on as experts in the male-dominated research environment of the 1960s.

Mack began breaking barriers very early in her career. She earned her master’s degree in chemistry and joined the faculty at Pennsylvania State University in 1919. Later, her doctoral dissertation focused on measuring calcium retention in bones. During World War II, Mack partnered with the U.S. Army to further her calcium investigations. Her research in this area included her work on a radiographic bone densitometer, a device developed to analyze bone mineral content using x-rays. This was one of six pieces of equipment she designed for bone density research.

In 1962, when NASA selected Mack to conduct bed rest studies on healthy young men to evaluate the effects of inactivity on bone mass, she used the densitometer to take the measurements. NASA also hired Mack to study the space travelers personally, whether they were human or primate.

She conducted research on several Gemini and Apollo astronauts, as well as a pigtail monkey who orbited the earth as part of the Biosatellite program. Researchers were required to take pre-flight and post-flight x-rays of the participants. Because she was a woman, however, Mack was not permitted on the U.S. Navy ships used to retrieve the space capsules when they landed in the oceans after flight. Instead, a male technician performed the post-flight duties, and these astronaut x-rays were compared to the ones taken by Mack pre-flight.

Known for wearing a mink stole and white tennis shoes no matter the occasion, Mack served as a mentor to future female scientists during a time when there were few women in the field. One of her former students (and former chair of TWU’s nutrition department) Betty Alford, Ph.D., said, “Dr. Mack helped me see a different view of what a woman’s role in society could be. She was certainly not your typical woman of the ’50s.”

Mack supported the space program into the early 1970s, as NASA prepared to launch Skylab, America’s first space station. In 1970, NASA’s astronaut corps presented her with a Silver Snoopy, a distinguished honor given to NASA employees and contractors for excellence in support of the space missions and achievements related to improving space flight safety. Her award letter was written by U.S. Astronaut Jim Lovell, commander of the famed aborted Apollo 13 mission. 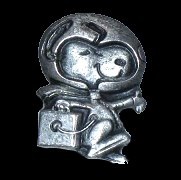 This letter is to express to you my personal appreciation for the care and effort you have demonstrated in performance of your duties on the Apollo Program, and especially for your contribution to the research of physiological effects upon astronauts in space. Your work on bed rest experiments and bone demineralization studies has been exemplary in all respects.

Mack continued her bone density studies until her death in 1974. Her research is now housed in TWU’s Blagg-Huey Library. In addition to the astronaut x-rays, her archive contains 85 cubic feet of her personal records, including data files, photographs, correspondence and copies of her publications and articles.

The bone density research performed by Mack on astronauts in the past remains relevant today as NASA continues to study the impact of long-term space travel. Astronaut Scott Kelly returned to Earth in March 2016, following a year-long mission aboard the International Space Station. Scott Kelly and his identical twin brother, Mark, currently are participating in the Twins Study, through which NASA researchers are gathering data on the physiological differences between the two men, including the measurement of bone mass changes.

Researchers outside of NASA are using data from the Twins Study and other bone density studies to better understand osteoporosis and other causes of bone deterioration. As a spin-off to this research, new medications and nutritional guidelines are being evaluated both in space and on Earth to determine if they can reduce bone loss in aging humans.

TWU continues to be a part of this research. Nancy M. DiMarco, Ph.D., a professor in the university’s department of nutrition and food sciences, studies the impact of micronutrients and how these effect osteoarthritis. Ironically, several of DiMarco’s projects have been funded by the Pauline Beery Mack Research Fund, including a follow-up study to bone density research Mack and her colleagues performed in the 1950s that tracked the correlation of nutrient intake to fracture risk over time.

For additional information about this pioneering woman of science, check out these resources: