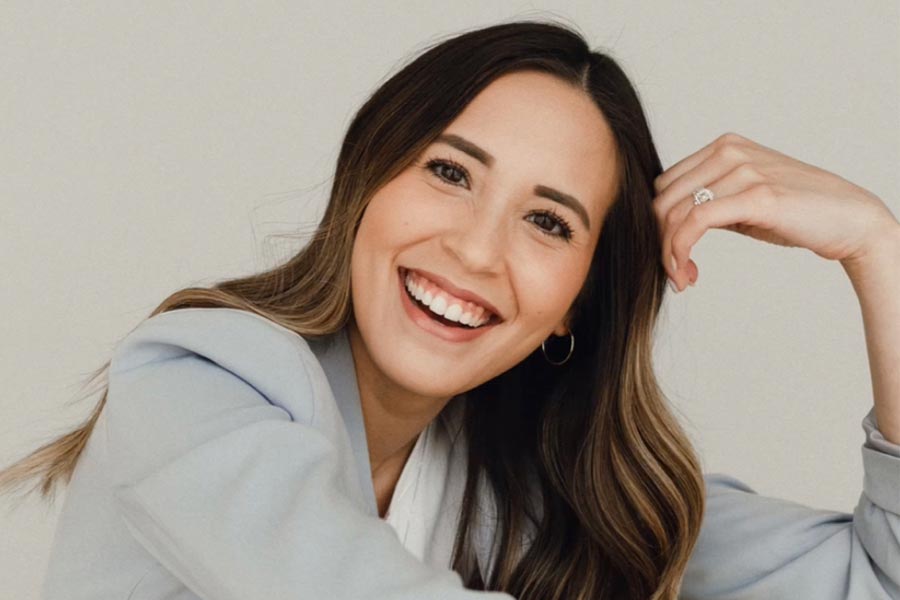 Oct. 17, 2022 – DENTON – Tiana James's road to the L.A. fashion scene is one less taken: Edmond, Oklahoma, to Albuquerque, New Mexico, through the Texas Panhandle and finally to Dallas-Fort Worth.

"You can call me a bit of a nomad," said James, a 2014 graduate of the Texas Woman's University fashion merchandising program.

According to Ad Age magazine, you can also call her a rising star in the ultra-competitive business of public relations and marketing. In September, Ad Age named James one its 2022 40 Under 40 honorees.

"Every single company has someone in house that does what I do, and they also have agencies they work with," she said. "It was a surprise to me but not to my husband. I thought it was one of those things that was a longshot. So many people are considered. I'm confident in the work I do, but it's very competitive out there. But my husband was not surprised at all."

"I don't know if it changes your career path, but I definitely think it can open opportunities and it can give you industry clout," James added.

It's her second such award in the last year. The Public Relations Society of America named 30-year-old James to its Dallas 40 Under 40.

A year ago, James was hired as manager of public relations and partnerships for the Victoria's Secret PINK apparel line, which will mark its 20th anniversary this month. James has played a critical role in re-branding PINK, bringing in celebrity and talent partnerships and making sure the company has the right voices amplifying its brand.

She faced an uphill task. Beginning in 2018, the company drew criticism over a lack of diversity and sales declined.

"I grew up with Victoria’s Secret PINK and watching fashion shows, and I was very familiar with the brand," James said. "The last few years there has been some backlash about not being super inclusive and showcasing diversity. While there's a ton of work that was been done before I got there, what was exciting for me was I was able to continue the path forward and make sure the talent PINK works with is reflective of our brand values and diversity."

That's reflected in the partnerships that James worked on, including with PINK's first male brand ambassador, actor Darren Barnet, for the company's new gender-neutral line, and with TikTok star and inclusivity advocate Remi Bader.

"I see our partners as having a seat at the table," James said. "It's a relationship. I want to make sure their voices are heard. I would never do a partnership that's just paying someone to promote our products. Gen Z is extremely smart, they grew up in the digital age and they can spot something inauthentic a mile away. When I do talent partnerships and relationships, it really needs to come across as sincere and authentic, and I think that differentiates us from some of our competition."

"I've always been passionate about diversity and inclusion, especially as a woman in business," said James, who is Vietnamese-American and is a member of the Orchid Giving Circle, a group of Asian women supporting the AAPI community in North Texas via grants and philanthropy.

No surprise, then, that she attended TWU.

James, who was born in Oklahoma, got her start in retail working in a mall clothing store before coming to TWU. Unlike some students who major in one subject with a minor in an unrelated field, James went all in on her career choice, majoring in fashion merchandising and minoring in marketing.

"I didn't know exactly what I wanted to do, but I always had a direction where I wanted to go," she said. "I was very passionate about retail and fashion, so fashion merchandising made sense, and within that my creative side really thrived."

Thrived and quickly moved up. She got a job as a buyer with JC Penney, but her supervisors realized her talents were in marketing. From JCP, she went to work at Keurig Dr Pepper, where she so impressed colleagues that two of them nominated her for the Ad Age honor. An industry contact also recommended James for the accolade.

The job with Victoria's Secret PINK calls for frequent travel. The company's headquarters are in Ohio and New York, and she also ventures to L.A. and Chicago when talent and influencers have an activity or photo shoot.

It would be understandable if James resided in the glamorous Hollywood fashion world. Instead, she lives in Frisco, Texas, and is married to a middle school teacher.

"I love that I'm still so close to the university and can get back to Denton. I want to continue to grow in my career and hopefully bring awareness to the amazing institution that TWU is."