May 19, 2022 — DENTON — Much of Riley-Grace Huggins’ childhood was spent surrounded by her mother’s books, particularly those concerning mythology that fueled a passion for ancient Greek culture. 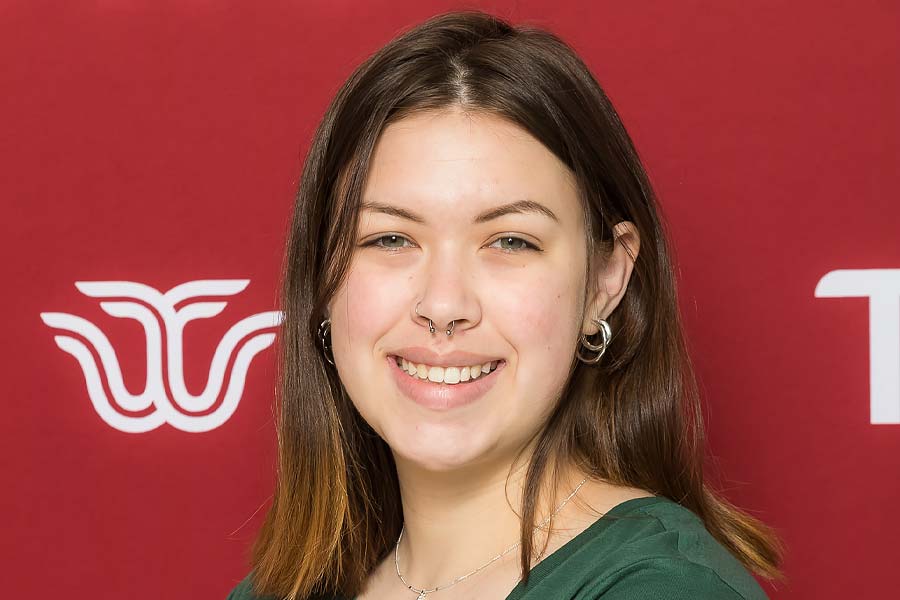 As she moved through secondary education, her fascination took her to public libraries, where she studied pictures of temples and tombs and vases.

But reading about Greece was never enough. She dreamed of exploring Greece itself.

“I told my mom I was going to find a way to get there,” Huggins said. “My life has been leading up to this.”

After earning four scholarships this year, she is realizing her dream this summer.

Huggins, a TWU junior from Lewisville majoring in English Literature with minors in journalism and history, a participant in the TWU BA-MA Accelerated Program and the daughter of a TWU alumna, departed this week to study in Greece. The scholarships will allow Huggins to spend two and a half months, from May to August, in Athens.

“I had to turn down a senior trip in high school to Greece and Rome because I couldn’t afford it,” she recalled. “Now, instead of a two-week trip chaperoned by high-school teachers, I’m going for a whole summer.”

She expected one. But all four?

“Because I’m a Terry scholar, I was expecting that stipend,” Huggins said. “But the others were a surprise. It’s unfathomable. I am very blessed.”

Huggins, however, didn’t wait for the blessing to arrive. She took out loans for part of the cost of the trip to meet a payment deadline of May 1. Fortunately, the loans had not been dispersed before she received word of the scholarships, so she embarked on her dream trip without debt hanging over her.

While she intends to soak up everything Athens has to offer, she has targeted a few sites for particular attention. Topping the list, the Acropolis.

“I have a huge interest in the Temple of Athena Nike,” Huggins said. “I really love studying that temple.

“I also want to see the Kerameikos,” she said of an area northwest of the Acropolis. This was the potters' section of Athens, and from it comes the English word "ceramic.”

“The ancient historical sites are everywhere, so I get to experience that first hand.”

“These experiences are transformative,” said TWU English professor Dr. Ashley Bender, who is Huggins' advisor and knew her before she came to TWU. “I think most folks who have traveled abroad will say something like they came back different, changed, that they had grown as an individual and had developed a deeper appreciation for other places and cultures. Studying abroad doesn't just change our education but changes our relationship to education by helping us to see that learning isn't just something that happens in a classroom, that each of the places we exist in offers itself to us to as a space in which we can learn and grow, intellectually and personally.”

After returning from Greece, Huggins will enter her senior year and her final preparations for graduate degrees.

“Around my sophomore year, I began to realize that I really wanted to pursue degrees beyond my bachelor of arts,” she said. “After I complete my B.A., I’ll have one year for my master’s in literature, and then I’d like to pursue a doctorate, probably related to literature of classical studies to continue this life-long passion for ancient Greek culture.

“Going on this trip and spending time at the foreign universities and with people of different backgrounds, that will definitely shape my future studies and future career plans.”

Those career plans are to remain in academia, contributing to research on Greco-Roman culture.

“Going on this trip and spending time at the foreign universities and with people of different backgrounds will definitely shape my future studies and future career plans,” Huggins said. “This trip will open doors for international opportunities.”

"From the first moment, I was so impressed with Riley-Grace," Dr. Bender said. "Her intellectual curiosity, her independence, her confidence and sense of self. Riley-Grace already had a plan of what she wanted to do, and how she wanted to get there. She's an extraordinarily intelligent person."