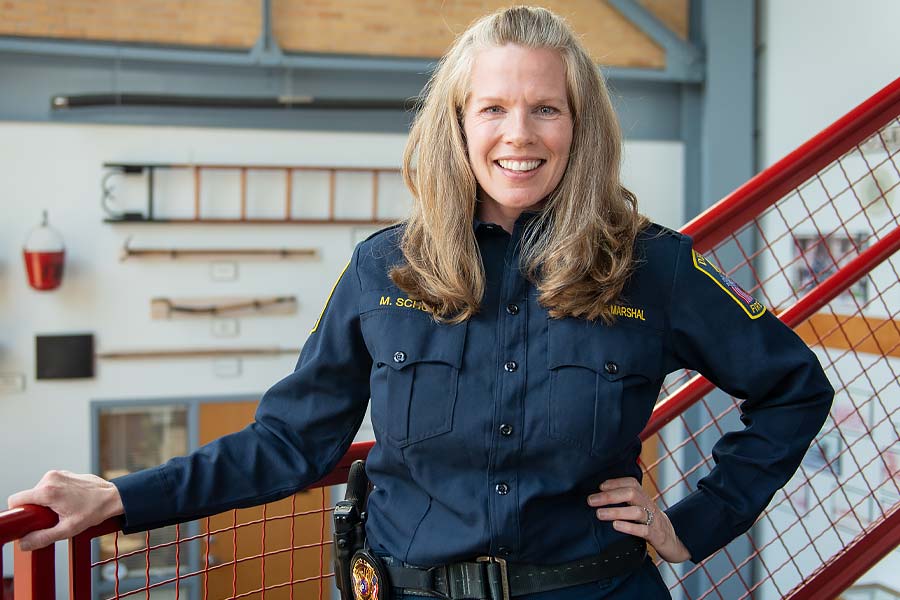 May 13, 2022 — DENTON — Megan Schuth gets it. It’s the obvious question, one she’s been asked repeatedly. She’s struggled to answer it herself.

“I was at a class in Huntsville for fire executive management training and professional etiquette,” said Schuth, who is a battalion chief in the Denton Fire Department. “I casually worked it into conversation that I’m graduating next week.

“‘Oh, are you getting your master’s degree?’

“The one question that everybody asks is, ‘Why?’”

Why is an assistant fire marshal and battalion chief in the Denton Fire Department getting a PhD? As she admits, a doctorate provides little benefit to a career in the fire service.

“I went to National Fire Academy last October,” Schuth said. “One of my instructors was the fire chief of Pittsburgh, and he had his PhD. I told him I was trying to finish my dissertation, and I get asked all the time, why? He said, being Black in the fire service, he always felt like he had something to prove. That kind of resonated with me.

“What I keep going back to is, we have certifications that we get through the state,” Schuth added. “All of those things are held by the entity you work for. But this degree is mine. It’s my thing that no one can take it away. I wanted to do something that stood on its own.”

Megan Schuth stands on her own as much more than the outward trappings of uniform and badge and the gun on her hip.

A Denton native, Schuth is the first woman to hold the position of battalion chief in the Denton Fire Department, promoted to the post in 2021. She was a police officer before joining the fire department. She has a bachelor’s degree in English composition. A decade later and after having children, she earned a master’s in professional and technical communications. She taught technical writing at the University of North Texas. She’s a mother of two, 14-year-old son Xander and 11-year-old daughter Berkley.

And on Friday, May 13, she will officially be a doctor of philosophy (the source of the term “PhD”) in rhetoric from Texas Woman’s University.

Schuth found the perfect environment to pursue that life-long-learning ambition at TWU. The term diversity is often focused on gender, race, ethnicity, sexual orientation, and socio-economic status, but at TWU it also has a generational aspect.

“As an older student, one thing that was really appealing was the diversity,” Schuth said. “There’s younger students, older students, full-time working students and parents. You feel like you belong there and you’re supposed to be there.”

“There,” however, was a nerve-racking place when she faced the final step to obtain a PhD: defending her dissertation. If defending a dissertation sounds like going to trial, there’s good reason.

“I was really nervous going in,” Schuth said. “They (a three-professor panel) want to see you succeed, but they don’t pull punches. They ask everything.”

The day before the dissertation defense, Schuth practiced over and over and over for a presentation that lasted 15 minutes. It was followed by 30-40 minutes of questions from the panel. Preparation paid off.

“It wasn’t as bad as I anticipated, because I knew all my material so well that there was no question I couldn’t answer,” Schuth said. “They want to know you have thought of every aspect and have a good reason for every research decision you make.”

After the examination, Schuth was asked to leave the room while the panel reached judgment.

“Then they came out and said, ‘Congratulations, Dr. Schuth,’” she said. “I was sitting at a table and suddenly realized, this is it, this is the moment! It was really cool. And Dr. Busl (Gretchen Busl, associate professor and English graduate programs coordinator) brought cupcakes, and we celebrated and had cupcakes.”

Schuth’s dissertation, “Performance Under Fire: A Study of Rhetorical Firefighter Identities,” stemmed from her observations of police and fire departments. Though Schuth is not a firefighter, leaving her outside the firefighter brotherhood, her position offers a rare insight into the people who run into burning buildings.

Schuth’s new identity was particularly of interest to her children.

“My son said, ‘So, you’re going to be a doctor? That’s really cool.’ I wanted my family to see that continuing your education and continuing to learn is really important. I missed out on some evenings with them, but I’m really glad to have shown them that. I tell both of them, you set a goal and you work towards it. But once you achieve that goal, don’t be done. Set your next goal.”

She readily admits that realizing her ambitions would have been difficult if not impossible without support at home. Her husband, Allen, works from home, enabling him to take care of much of the childcare.

“He takes the kids to school, picks them up, makes their lunches, gets them breakfast and makes dinner every night,” Schuth said. “That’s another great thing for the kids to see: a stay-at-home dad and a working mom, to know that there aren’t traditional roles you have to fulfill. It really complemented my drive and motivation, that he’s happy to support that. I couldn’t have asked for a better husband. We really are a collaborative team.”

Indeed, they circle back to firefighter brotherhood.