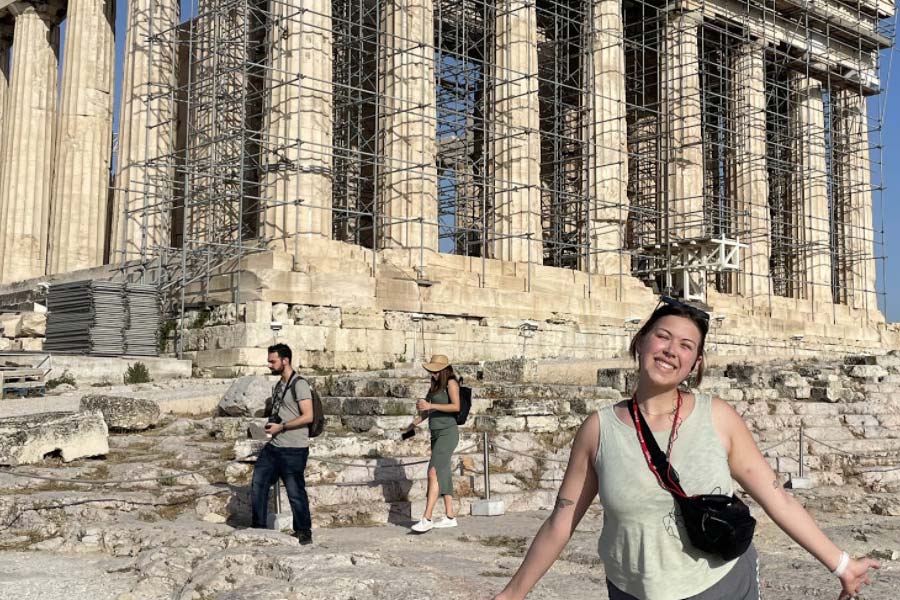 Riley-Grace Huggins at the Parthenon

Studying in Greece was everything TWU's Huggins imagined

School has been back in session for a month and everyone is getting back into the daily classroom routine, shaking off the last daydreams of summer. It's been easier for some than others.

Not everyone met and was then separated from the great passion of their life.

"I really miss hearing Greek people in the background," TWU senior Riley-Grace Huggins said. "I miss that a lot. I had a FaceTime call with a friend over there, and she was speaking Greek to her mom. I almost cried. I miss it."

Huggins earned four scholarships during the 2021-22 academic year, allowing her to realize a life-long dream to study in Greece, which she did from May to August. She spent most of the time in Athens, residing in Agia Paraskevi, the suburb in which the American College of Greece is located.

It went better than she imagined.

"It was amazing, and I miss it a lot," Huggins said. "It's hard to come back. This will forever leave a mark on who I am, and I'm really grateful for that.

"Before I went, I had a lot of anxiety about going alone," she said of traveling abroad for the first time. "But once I got off the plane, I felt this incredible sense of peace. I felt like I was exactly where I was supposed to be. I felt calm, and I had no anxiety about being there. I think to be able to go to a place I've never been and feel so at peace is further confirmation that this is where I'm supposed to be."

For good measure, she was able to visit Paris and London.

"And my last week I spent in Rome with a friend I met in Greece."

Did anyone else have Athens, Paris, London and Rome on their summer itinerary?

"I really milked the whole experience.

The focus of the trip, however, was Greece. Athens in particular. Huggins had read about it for years, studied it in high school and college, and it was the reason she applied for those scholarships.

"One of my Greek friends, who has worked at the residence and had met lots of Americans, said there are not many people who study abroad that spend time in Greece," Huggins said. "They go so they can travel to other places. She thinks it was probably much harder for me to leave because I was intentional about attaching myself there and understanding the culture. That was the whole point of me going, not to jump around the islands and go party in Santorini. I wanted to meet Athenians."

And her feelings were reciprocated by the Athenians, who take great pride in being hospitable. They take visitors to their favorite restaurants, teach them how to use public transport and how to navigate the neighborhoods.

But the moment for which Huggins had so breathlessly awaited came atop the Acropolis, the ancient citadel sitting on a rocky hill above Athens and home to one of the most famous structures in the world: the Parthenon.

"It was…," and she paused. "I think the first thought I had was, it's not as big as I thought it would be. Not in a disappointing way. I had to write an essay for one of the two history classes I took while I was there. I was doing research on Lord Byron, who had a huge impact on the Greek revolution. I'm a literature major, so I knew about that. There's a quote in a biography about Byron's time in Greece that compared him to Sigmund Freud traveling to Greece. The first time Freud saw the Parthenon, he wrote about this phenomenon whenever this concept that existed in childhood becomes married to something tangible and visible in adulthood."

Freud wrote a letter to a friend about his experience the afternoon after his arrival at the Parthenon: "I stood on the Acropolis and cast my eyes around upon the landscape, a surprising thought suddenly entered my mind: 'So all this really does exist, just as we learnt at school!'" Freud called it de-realizations, the disturbance of memory and a falsification of the past.

"I spent all these years thinking about and dreaming about the Parthenon, and now here it is in front of me," Huggins said. "Now I have to combine those two things as the same thing. It was smaller than I imagined, but I think it made it more real to me.

"But it was surreal to be there and be in that city. Real historic people existed in these places for thousands of years. Socrates was here. Now I'm here."

And now she's home. As she shared photos from her trip, she paused at a photo of a sunset in Athens and sighed heavily. This really is a love story.

But these lovers are only separated for a time.

"I'm going back for winter break, spending Christmas there with the friends I made," Huggins said. "I didn't expect to form such tight bonds so quickly. I think traveling abroad puts your head in a different space. You have to adapt much more quickly to life there. It's not just a vacation. Meeting people and getting to know them, and pouring energy into that."

Huggins expects to finish her bachelor's degree in May 2023 and her master's in May 2024, both at TWU, before pursuing her PhD, possibly abroad.

"I really would like to get back to Greece permanently," she said. "It just reminded me of all that's possible and within my reach." 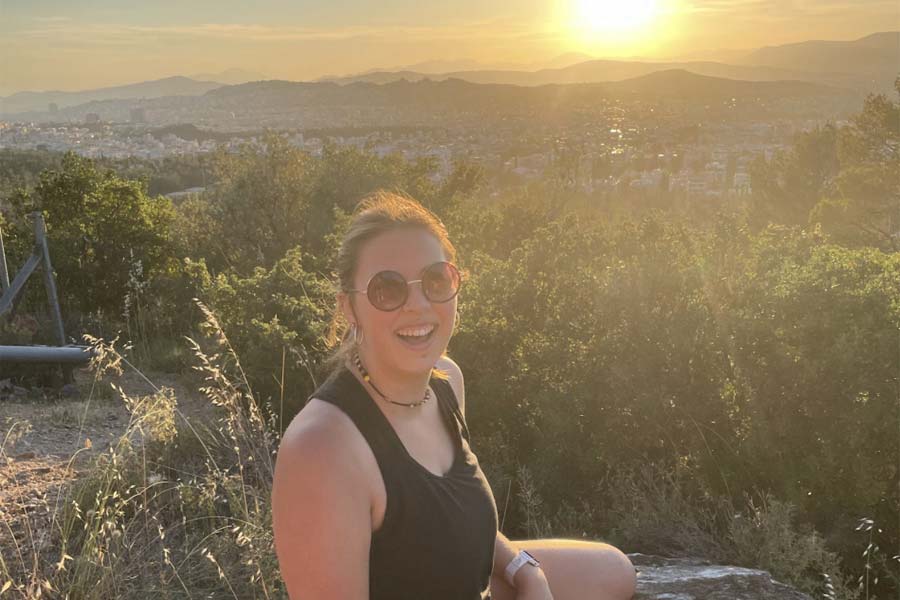 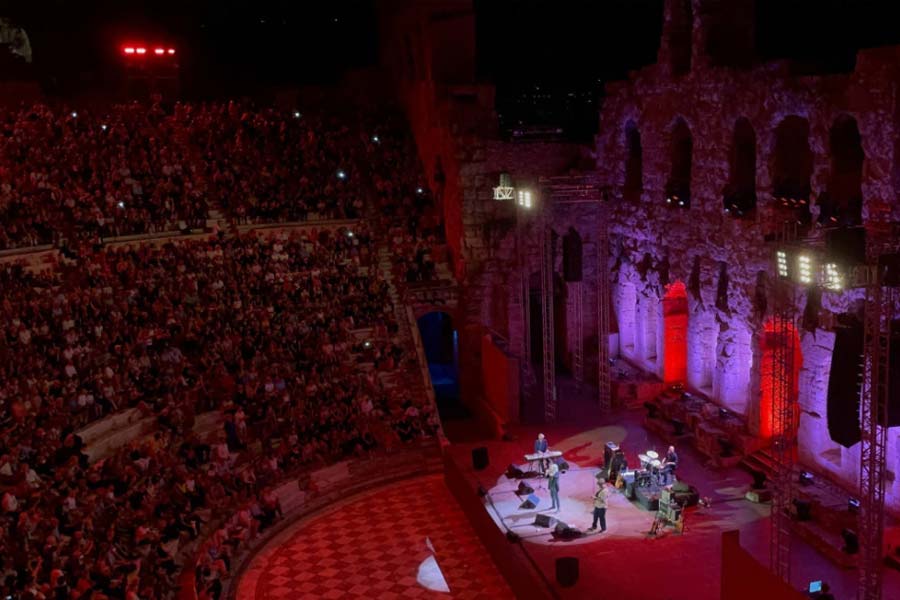 Riley-Grace Huggins attended a concert at the Acropolis 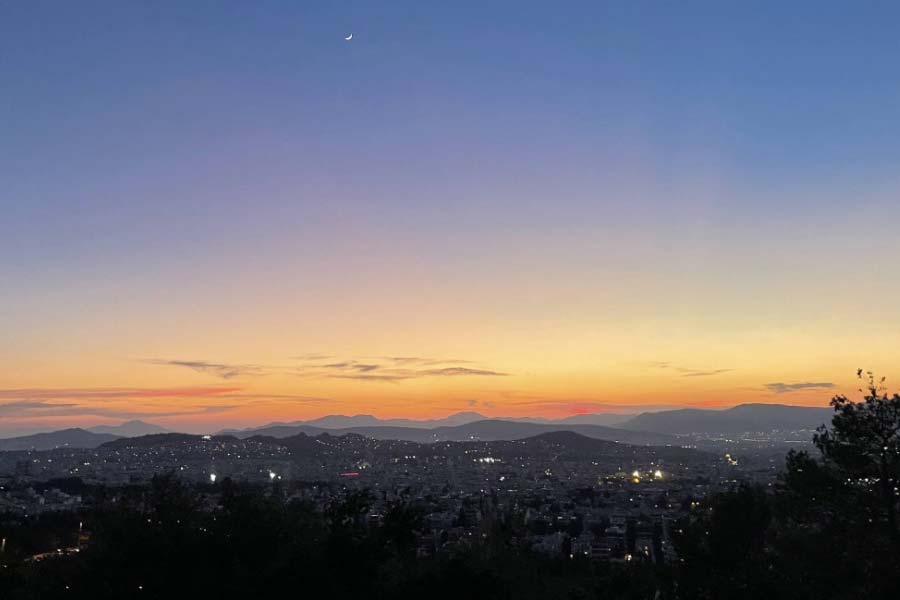 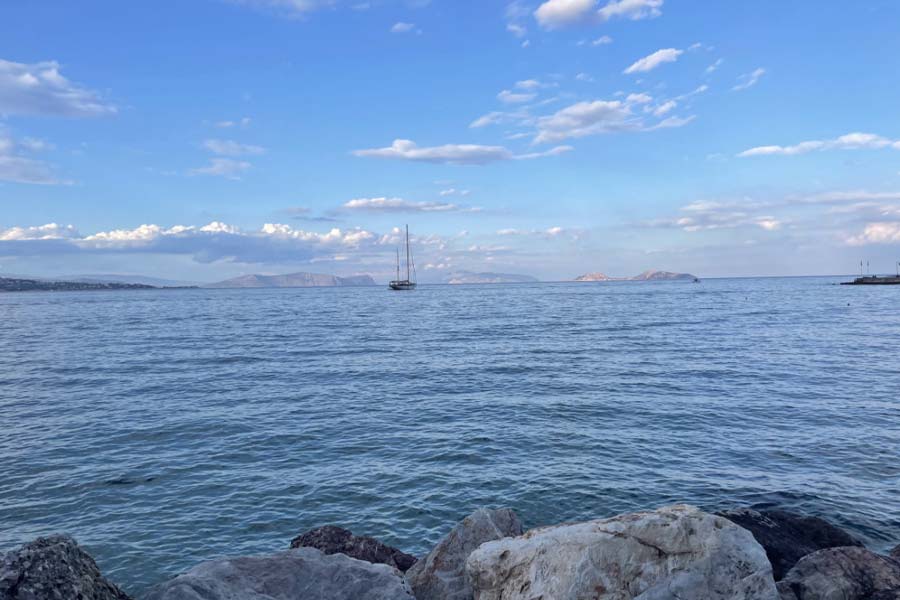 The ocean off the Greek Isles 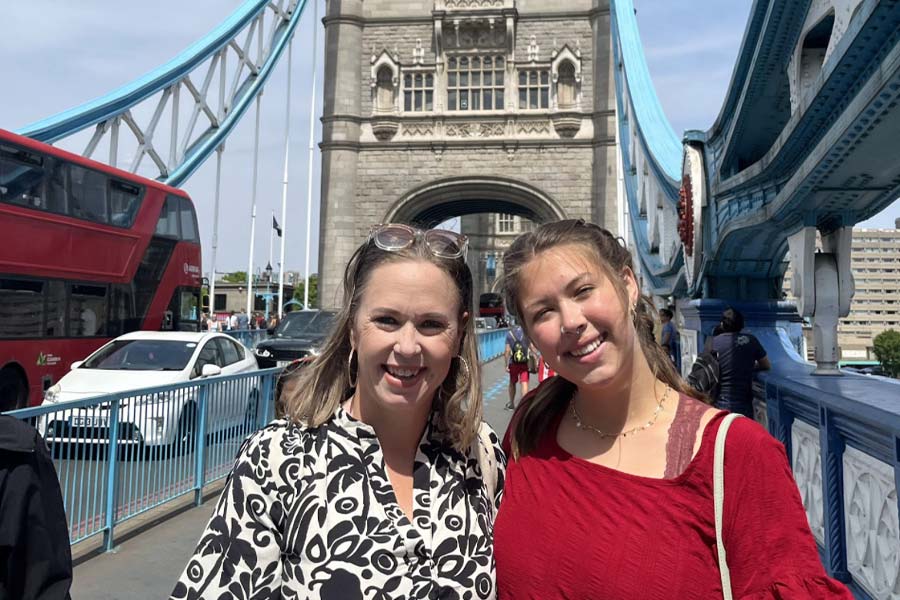