TWU occupational therapy graduate has a passion for helping others

April 29, 2021 - HOUSTON - Houston native Anthony Bui wanted to make a difference in the world, but wasn’t sure how to accomplish that. He knew it would involve serving others, though, and joined the U.S. Marine Corps right after graduating high school. Now, he’s set to receive his Master of Occupational Therapy (MOT) degree in Texas Woman’s May 2021 Houston commencement ceremony.

Bui served with the Marines for seven years, reaching the rank of sergeant and completing a combat tour to Afghanistan and an overseas tour aboard an assault ship. He worked as a radio operator during his term of enlistment, maintaining all communications with troops on the ground through the use of high-tech radio systems.

A family emergency led Bui to a new area of service, and to TWU.

“My mother suffered a stroke in 2015, and I rushed home from my duty station to be with her,” Bui said. “During my time home, I had the opportunity to witness her occupational therapist work with her and rehabilitate her to doing the things she needs and wants to do. I was so inspired by her OT working with her that I wanted to do the same.”

The occupational therapist who rehabilitated Bui’s mother was a TWU graduate, so Bui went to the university’s website.

“I searched for the things I needed to do to become an OT, and six years later, I am graduating,” he said. 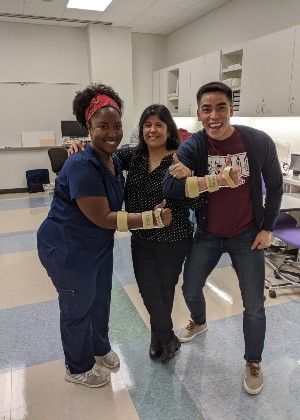 “What I enjoyed most about the program was that my cohort was filled with amazing people with the kindest souls,” he added. “Each one of them had their own reason why they wanted to be an OT, and the one thing we all had in common was a passion for helping others.”

Bui also had a special relationship with Sophie Lin Rydin, PhD, a TWU alumna and adjunct professor who passed away July 28, 2020, following a battle with cancer. The School of Occupational Therapy at TWU’s Houston Center is named in her honor.

“Dr. Rydin taught us a lot of things, not only about how to be an occupational therapist, but also how to be kind, compassionate, and using humor to brighten up someone’s life,” Bui said. “When I noticed that she wasn’t feeling well one day after class, her lessons just stirred up inside, and I felt an immense urge to assist her. My buddies all felt the same way, and when we asked her if she needed assistance to get to her car, her face lit up, and she had the biggest smile.”

A picture of Bui and his friends assisting Rydin is included in a tribute to her.

“We didn’t do anything extraordinary,” he said. “All we did was carry her bags and open the doors, but that little act of kindness made such a big impact. Then it dawned on us that this was exactly what she wanted us to learn from her and when going into the occupational therapy field — little acts of kindness can make a tremendous impact in someone’s life.”

Bui wants to take those lessons and work at a neuro rehabilitation clinic after graduation. After gaining clinical experience, he plans to return to Texas Woman’s to pursue a PhD and eventually teach occupational therapy.

“I want to be just like Dr. Rydin, where I can inspire my students just like she did.”