The vast and the curious 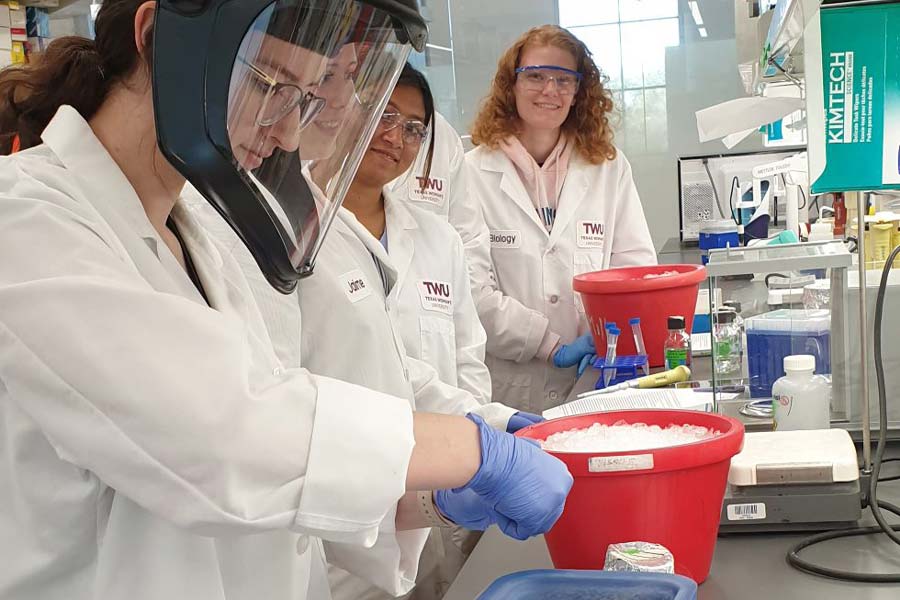 Oct. 25, 2022 – DENTON – There is a dimension unknown to all but an uncommon few. It is vast, yet fits within the nucleus of a single cell and challenges the human mind's concept of the finite. It is found in every living creature on Earth and within its matrix is the blueprint of each organism, but until very recently it existed beyond human comprehension. It is the world of the infinitesimal.

And it's a little hard to wrap your mind around.

"It's so abstract," Pislariu said. "When I started studying this in school 22 years ago (when she began pursuing her PhD) I was at the level of many of my students who can't wrap their heads around this. How do you do this?"

"It's not just cloning, it’s molecular techniques, methods and instrumentation," she said.

And it's one of the most hands-on graduate-level course TWU offers.

"This is the type of class you cannot teach online," Pislariu said. "It's meant for incoming graduate students to become familiar with molecular techniques so they can use them in their own research."

Molecular biology, a phrase that didn't exist until 1945, is the study of how molecules interact with one another in living organisms to perform the functions of life, and is applicable across a swath of scientific fields.

"In our class, we had cancer biologists, neuroscientists, protein degradation people," said student Miles Gladen. "We're all bringing our research into the classroom."

But something surprising happened in the 2021-22 class. The students didn't just learn how to make discoveries later in their careers. They actually made discoveries of several unique DNA sequences which were published in the gene sequence database of the National Center for Biotechnology Information at the National Library of Medicine.

"At the beginning, I didn't know the students would get such high-quality data that would be publishable," Pislariu said. "They do every little piece of work that a seasoned scientist would do in their research. It's a wonderful experience. They went from a gene identity to moving that gene into a plasmid, sequencing it, finding out the sequence, and finding out the encoded protein’s localization in a semester's work."

And the National Center for Biotechnology verified the discoveries as new and correct.

"They were thrilled," Pislariu said of her students. "The excitement that this brings when you have a project that has a purpose, starting with an initial question and finish with an end product that gives you a scientific answer, that makes them feel really excited."

For the vast majority of the population, molecular biology is utterly alien. Most of us are ignorant of its concepts and language. For example, consider the title of one of the four published submissions:

Or the title of one of the course research methods from TWU catalog:

"Plasmids as Vectors for Recombinant DNA"

And if that's incomprehensible, try to wrap your head around the physical nature of DNA.

But many of us at some point in school looked through a microscope to see microbes and cells. DNA, however, is in a sub-invisible world pierced with an electron microscope. In fact, it was only 10 years ago that the DNA double helix was first photographed in blurry, indistinct images. 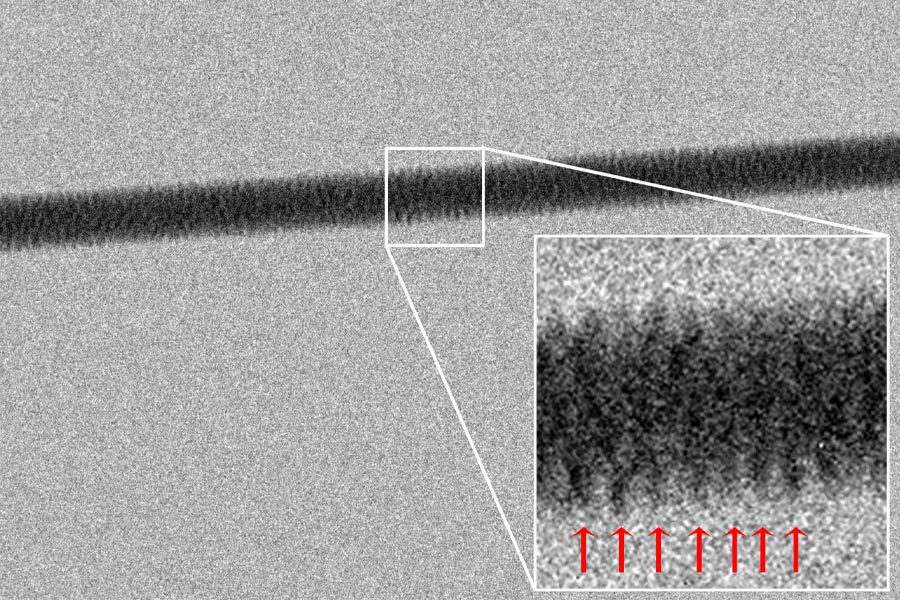 A photo of DNA taken with an electron microscope.

Contained in your cells is your DNA, made of things called nucleotides, which are 0.6 nanometers. A nanometer is 1,000 times smaller than that micrometer, or one billion times smaller than a meter. Yet those tiny organic molecules are the building blocks of the 3.2 billion base pairs of your DNA contained inside each of your cells.

If that doesn't stress your perception of reality, try this: if the DNA from just one cell were uncoiled, it would be six feet long. And if the DNA from all of your cells were uncoiled and strung end to end, that strand would be 67 billion miles long – 22 times the distance from the Earth to Pluto.

"My friends outside of the school and academia say 'you do what every day?'" Gladen said. "There is a highly elevated level of knowledge students have to bring to the course. It's not just for anyone to walk into. But for people that want to go deeper into the scientific realm, it's an important class."

"We're scratching the surface of molecular biotechnology, with uses we can't imagine now," Pislariu said. "And there are more coming all the time. I think the future of medicine is going to involve a lot of gene therapy."

Gene therapy involves treating disease by repairing or reconstructing defective genetic material, which promises to be of immense importance in a variety of medical fields.

That potential is reflected in the anticipated job growth in molecular biology. In the next 10 years, the field is expected to grow by 19%, much higher than most industries.

The molecular biology class gives students the tools they need to be a part of that industry. The class attracts students from other schools, including University of North Texas, and, working in small groups, the students go through each step, from making solutions to using liquid nitrogen to grind tissue before extracting the genomic DNA.

"I give each student team a gene identification number," Pislariu said. "From that, they have to discover how they can retrieve the sequence using bioinformatics tools, how to clone that gene into a series of plasmids in a way that will eventually produce the encoded protein as a fusion to a fluorescent marker, a green fluorescent protein. Through a series of transformations, the expression plasmid is deployed into tobacco leaves. Within two days, the fluorescently-tagged protein will glow, allowing us to find out where exactly inside the cell the protein is found."

There's no practical use for making a tobacco leaf that glows, unless you want to roll your own cigarettes in the dark. The purpose here is to learn the techniques and methods to use the tobacco leaves as tools to locate the glowing proteins.

"It was one of the best classes I had for how to do research techniques," Gladen said. "A lot of the techniques I'd heard of and been taught in class, but Dr. Pislariu and Dr. Mills were able to walk us through it and did an amazing job helping us to understand how to run these and show us techniques we might not do every day in our research. It's a real foundational course for a PhD student."

"You don't solve everything in one session," Pislariu said. "It's the workflow. They do everything, every little step. Every step has its own benefit. Even if a step does not work well, you learn from that. Sometimes you learn better from a mistake than when everything goes smoothly.

"It takes a lot of patience. And passion."