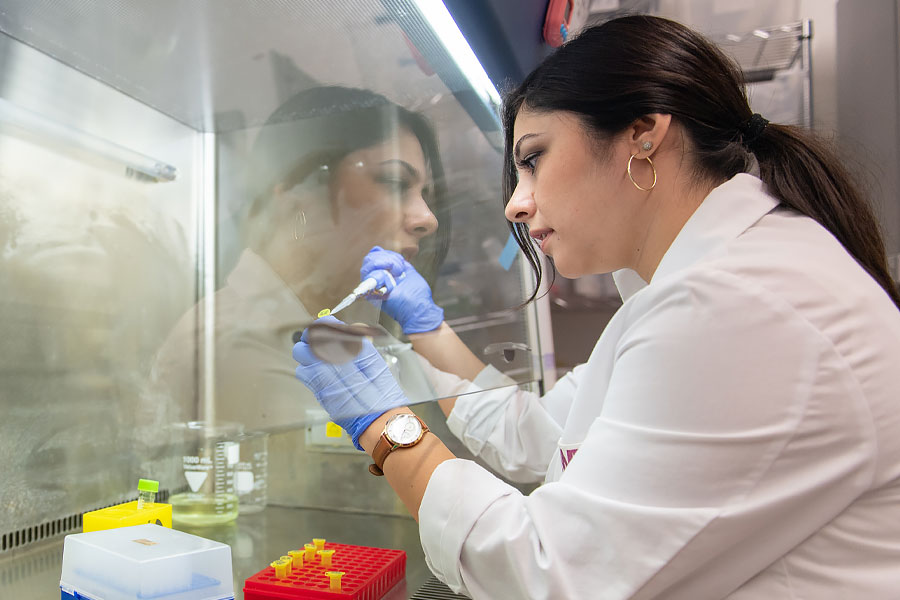 July 11, 2022 – DENTON – There’s a virus called human cytomegalovirus. You’ve probably never heard of it, although there’s a good chance you or someone you know has CMV. It’s estimated that almost half of Americans have it, but there’s a very good chance you’ll never know you have it.

For most people with a healthy immune system, CMV has no symptoms. It doesn’t sicken or kill. Doctors rarely treat it or even screen for it, and CMV is unlikely to impact your health.

Unless you have breast cancer.

Doctors and researchers do not believe CMV – which is transmitted through saliva, blood, and breast milk – causes cancer or makes someone more likely to get cancer. But it’s possible that the virus affects breast cancer itself, making it more difficult to treat.

That’s where Texas Woman’s University biology student Erica Garcia comes in. Garcia, a PhD candidate from Diamond Bar, Calif., is researching the mechanism of the relationship between CMV and cancer. Understanding that process could be key to better treatment of breast cancer and possibly other cancers. 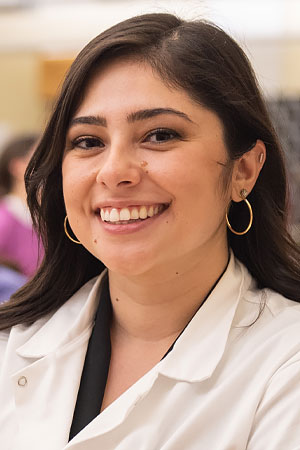 "I came across an article that said in areas of a breast-tumor biopsy there were a lot of cytomegalovirus protein and lower levels of hormone receptors, which are targeted for treatment," Garcia said. "CMV is an indicator of treatment resistance. It’s actually more prevalent in breast-tumor tissue than in adjacent normal tissue, so that suggests maybe it plays a role in altering the invasive characteristics of breast cancer.

“Erica’s research is showing that CMV can cause a developing tumor to be more resistant to drug treatment and be more likely to metastasize,” said Juliet Spencer, director of TWU’s School of Sciences and a biology professor.

There are other long-understood consequences of CMV. The virus in pregnant women can cause of birth defects, and it can cause problems for those receiving organ transplants.

But the notion that CMV impacts cancer cells and how they respond to treatment is new.

The first clues that inspired this medical detective work came to Garcia during her job at a genetic testing lab.

“My job was to double-check the data and patient clinical notes for people who are getting checked for genetic mutation that could make them more vulnerable to cancer,’ she said. “I learned a lot about breast cancer there.”

That interest in breast cancer was further fueled by findings of physicians treating cancer.

Dr. Charles Cobbs, a neurosurgeon who pioneered work on a type of brain tumor called glioblastoma, was among the first to notice higher amounts of CMV in tumors than in adjacent normal tissue. Dr. Cecilia Söderberg-Nauclér in Sweden demonstrated that antivirals improved the life expectancy of patients with glioblastoma.

Those physicians, however, were looking at the results of CMV’s impact, not its root mechanism.

“A lot of the work so far has been in biopsy samples, which are fixed,” Garcia said. “While that’s a good starting point, it leaves the question of whether CMV is the causative factor. It’s important to establish if CMV is causing this, because there are some complicated interactions that go on in your body.”

“From fixed samples, you can’t really tell a causal effect,” Spencer said. “But if you back up and do the science, you can infect tumor cells and see what happens to them. Those are the experiments that Erica is doing. What we find happens to those cells is not good.”

“What I have seen so far is that the estrogen and progesterone receptors – two of the classic standards of care for breast cancer patients for the last 60 years – those receptor levels tend to go down as infection progresses,” Garcia said. “What I’m trying to find out is, what is the mechanism for that?”

“She now has very specific evidence that virus infection reduces the expression of these receptors that are classic targets for treatment,” Spencer said.

The scientific community has reacted skeptically to the concept of CMV’s impact on cancer.

“It’s a matter of getting the medical community to see that this is important,” Spencer said. “We have separate data of human specimens that clearly show that people who have CMV have different immune responses to cancer than people who don’t. If we can explain the underlying mechanism of how this is happening, we could get a little more buy-in of our ideas.”

Garcia’s research could help persuade the community, and therefore lead to changes in the treatment of breast cancer. For starters, screen breast-cancer patients for CMV, especially when initially diagnosed.

“If physicians check that CMV status, it might help them prescribe a better treatment,” Garcia said. “The goals of the virus and the cancer cells are the same. Both want the cell to survive long enough to produce more virus or cancer. I want to look at those immune receptors to see how CMV is helping the cancer cells hide from your immune system.”

“It could be a simple administration of antivirals could help reduce virus levels and restore the tumor’s susceptibility to the drug,” Spencer said.

One bit of good news in this unfolding mystery: while CMV cannot be eradicated, it can be controlled with available antiviral medication.

So how far away is this research from provable conclusions? When can patients expect to see benefits?

“I’m not sure how far away we are,” Garcia said.

“We would call this the pre-clinical stage, because it’s mostly taking place in human-cell cultures and in animals,” Dr.  Spencer said. “It depends on what kind of mechanism Erica uncovers. If it’s something very specific where the virus is causing these receptors to be degraded, that could be a relatively quick intervention.”

It can’t come fast enough for the estimated 287,000 women who will be diagnosed with breast cancer this year, according to the American Cancer Society, accounting for 30% of cancers among women. It’s estimated that one in eight women in the United States will develop breast cancer.

"The thought that I could improve those lives is a big motivation," Garcia said.

“We focused on breast cancer because we know for a fact that CMV is in breast tissue,” Spencer said. “We felt that in a world of where there is skepticism, this is a pretty compelling argument.”

There have also been indications of CMV's involvement in other cancers, like gioblastoma, a brain tumor. Possibly prostate cancer as well.

If CMV does affect breast cancer, it seems improbable that its impact is restricted to one cancer. And if it affects other cancers, you’re no longer talking about 13 percent of women, but 39.5% of the population - female and male – who will be diagnosed with cancer at some point in their lives, according to the National Cancer Institute.

“This is a virus that lives in your body for years and years, so it might not matter where it is because the virus can affect cancer,” Spencer said.

It’s ground-breaking research that could have far-reaching implications.

“This is happening at TWU,” Spencer said. “This is cutting edge research that has the potential to change the treatment for some women with breast cancer. To have this level of research going on at TWU is really exciting.”