Oct. 15, 2019 — DENTON — This year over 13,000 campus challenge participants logged more than 65,000 outdoor activities in the Association of Outdoor Recreation and Education (AORE) Campus Challenge, and Texas Woman’s University has been crowned the champion of them all!

In addition to being named the National Outdoor Champion among Division 1 universities across the nation, TWU was also named Environmental Champion; Health/Wellbeing Champion; Developing Skills/Personal Growth Champion and Southwest Champion for the region. 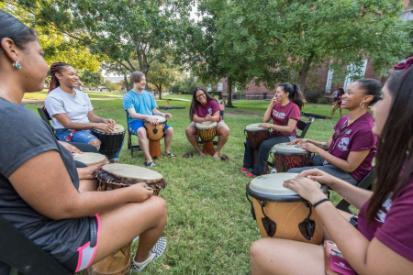 Barbara McAlister, a first-year graduate student in the dance program at Texas Woman’s and graduate assistant in TWU’s Health and Wellbeing Initiative, was named the Individual Southwest Champion.

McAlister said that she had help along the way and could not have done it without several members of the TWU team and a little luck. “When people think about getting outdoorsy, I don’t think Texas is the first place that comes to mind,” said the Massachusetts native. “TWU made me rethink that bias. My hope is that those who participated will remain altered by the experience.”

Texas Woman’s competed against 98 other universities across the nation from September 16 until October 13 and accumulated the most points during the challenge, outpacing the second place university by more than 50,000 points.

Formerly known as Outdoor Nation, TWU has competed three times in the competition, placing third twice and second once.

According to Karrie Fletcher, associate director of fitness and recreation at TWU, the win represents more than just bragging rights for the university. “We have embraced this challenge every year as a way to motivate our campus community to get active in the outdoors and build healthy habits that will last a lifetime.”

The TWU team, comprised of approximately 1,500 people, participated in more than 35 university-sponsored activities throughout the challenge, including camping, stargazing, puppy yoga, service projects, and biking among others.

“This was a university-wide effort,” said Fletcher. “It included faculty taking their classes outside, student organizations leading service projects to pick up trash and departments going on walking meetings around campus.”

A campus celebration is being planned for Nov. 5 from noon until 1 p.m. in front of the Fitness & Recreation building on the Denton campus. Plans for Houston and Dallas campus celebrations are being finalized. The events will include t-shirts, door prizes, and more.