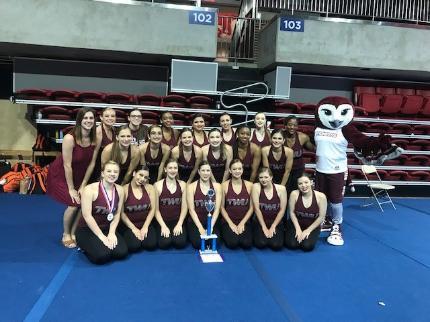 The team also received a silver bid, which is a monetary award that will help offset the costs of travel and registration to the National Dance Alliance (NDA) competition later this season. This award places them in the top half of all teams attending the camp.

“Attendance at the NDA camp is critical for qualifications for the NCA & NDA College Nationals that will be held in Florida in April 2020,” said Allison Fields, director of the Pioneer Pride Dance Team. “We have a great team this season and received many compliments during camp.”

The team not only received compliments, but also was awarded the spirit stick the first day of camp and was given a “superior” standing out of all 15 teams attending.

While this is the team’s third trip to the NDA camp, Oakley attended for the first time, making a big impression by swooping in to assist teams that did not have a mascot. Additionally, Brook Ashmore, who is a junior and team captain, was named All American during camp. Teammates Maddie Hoffman and Victoria Meese were also nominated.