Jan. 20, 2023 — DENTON — In case you missed out on celebrating the 2023 New Year, you have another opportunity to get this year started off on the right foot—join in on Lunar New Year, which begins on Sunday, Jan. 22.

Lunar New Year is heralded as one of the most important celebrations among East and Southeast Asian countries, including China, Vietnam, Korea and others. Additionally, each Lunar New Year is represented by an animal in the Chinese zodiac, and this year has been designated as the year of the rabbit.

Fortunately, it is also a celebration that lasts for several days unlike the Gregorian calendar new year, so let’s dive into our "best of" list: 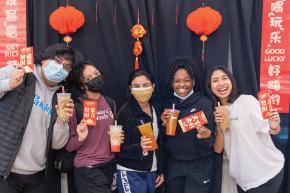 Join the Asian Student Association, Office of Diversity, Inclusion, and Outreach, and International Education as they celebrate the beginning of the new Lunar Calendar. On Tuesday, Jan. 24 at the Student Union at Hubbard Hall in the Southeast Ballroom from noon until 2 p.m., they will have red envelopes, lantern making and giveaways, including t-shirts and free boba tea from Bunsen Tea Lab (for the first 100 students).

Celebrate the Year of the Rabbit with NorthPark Center and the Crow Museum of Asian Art on Saturday, January 21 in Dallas. Events will be happening throughout the mall all day long, starting with storytime at 9 a.m., the lion dance at 10 a.m. and the Dallas Asian Wind Symphony performance at 11 a.m.

Grandscape in The Colony is hosting a free Lunar New Year festival 2-4 p.m. Jan. 22 on the Topo Chico Hard Seltzer Stage & Lawn. There will be performances, food, crafts and giveaways.

Performing at Winspear Opera House starting, Shen Yun is a celebration of China’s cultural heritage. Touring over 150 cities in the world each year, the live performance sees one million audience members each season. It already passed through Dallas in January, but you’ll have another chance to catch it Feb. 24-26.

For those who are interested in collectibles, Barbie® partnered with renowned Chinese couturier Guo Pei once again to create a resplendent two-piece couture look. We understand the $80 price tag may be a little steep, but hats off to Mattel for this inclusive design.

We know. It’s a stretch. But if you are into limited-edition makeup, Sephora has several offerings from brands that have done their part to mark the occasion. Additionally, Estée Lauder has a whole spectrum of gifts specifically designed for the Year of the Rabbit.

Festival and Parade in the US

Named one of the top ten Parades in the world by the International Festivals & Events Association, the Chinese New Year Parade in San Francisco is one of the few remaining night-illuminated parades in North America and the biggest parade celebrating the lunar new year outside of Asia. If you're willing and able to travel, the upcoming Chinese New Year Parade will be held on Feb 4, 2023.