May 4, 2020 – HOUSTON – Texas Woman’s nursing student Nimreh Warsi can vividly recall the day her father had a heart attack. 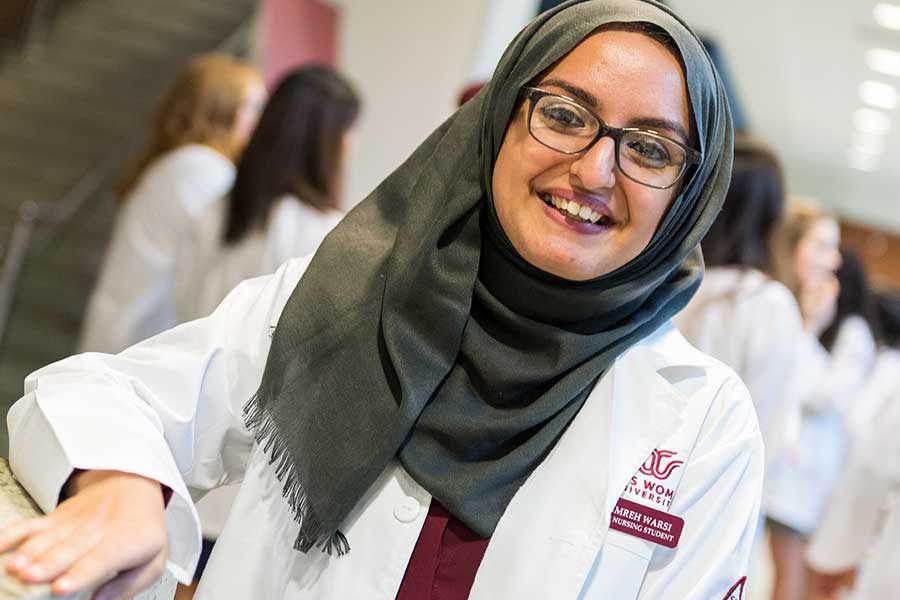 She was with her mother, on their way to a wedding, when a devastating phone call came in: her dad was having complaints of chest pain and was on his way to the hospital.

“Even though I was young, I was still old enough to understand what was going on,” said Warsi. “I remember a distinct feeling of fear taking over me. My brain was imagining living nightmares of a life without my dad, celebrating milestones without him. Looking back at it, I don't think I've prayed that hard in my life as I did that day for my dad to make it out okay.”

At the hospital, a team of medical professionals was in action, saving his life.

“I remember the nurses would come in and ask all these questions,” added Warsi, who was 14 at the time. “I remember staring in awe like, wow, they’re making such a difference.”

That experience eventually led Warsi to the TWU Institute of Health Sciences – Houston Center, where she is now a junior. She always had a passion for helping others, but something about that day stuck with her.

Now enrolled in nursing school, Warsi is sharing her experiences.

“There are a lot of amazing nurse bloggers, but I never saw anyone who looks like me, who wears the hijab,” said Warsi, who is pursuing her undergraduate degree in nursing through the Nelda C. Stark College of Nursing. “I realized maybe we need more people like that, and I can be the inspiration.”

For her, that includes posting on Instagram. More recently, she has been documenting how the COVID-19 pandemic has impacted her as a student.

“It’s definitely been an adjustment,” she said. “I knew nursing school was going to be tough because of exams and skills check-offs, but I didn't think it would be because we're trying to maintain some sort of sanity and productivity while the whole world has shifted upside down due to a global pandemic.”

School now consists of taking classes in pharmacology and pathophysiology online, as well as studying remotely at her parent’s home in Houston, Texas. She added that the most difficult challenge is discipline.

“It's so easy for me to fall out of my routine and just spend lazy days doing mindless tasks. I dedicated a work space in my home to give me some sort of school environment that keeps me academically motivated,” said Warsi, noting that despite the changes, she’s happy to spend more time with parents who always supported her educational journey—even when she had doubts.

For Warsi, a career in health care was always on the radar. A number of close family friends and relatives worked in the field. Additionally, her mom, as a young woman, had hoped to become a doctor. 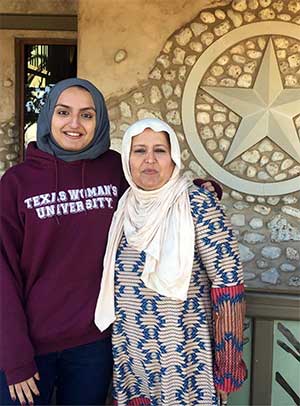 “She got married at a young age, moved countries and had six children,” said Warsi, who is the youngest. “It never worked out for her, but she always wanted one of her kids to go into health
care.”

Still, despite her mom’s hopes, Warsi initially planned to become a psychologist or a teacher.

“Being of South Asian descent, a medical career isn’t really encouraged for women because of the stereotypes that women are usually the one taking care of the family. Doctors and nurses put in such long hours for their schooling and career, so I never really thought about pursuing it,” she said.

Her father’s health scares and surgeries changed her mind. Soon, she started asking others about schools. One name kept popping up.

“They all said that Texas Woman’s is the best, so for me, it just felt like the right choice,” said Warsi.

Like all nursing undergraduate students, she started on the Denton campus.

“It was really hard moving away,” she said. “None of my family members moved away for college. And in my culture, it’s not common for the girls in a family to move away. I honestly thought there was no way my parents would say ‘yes,’ but I found that they were my biggest support system.”

While in Denton, Warsi said she met incredible people and started a Muslim Student Association. Among the events, the group was able to host a “Love a Hijab” day in which others could try on a scarf, take photos of themselves wearing a hijab or ask questions.

At TWU Denton, she completed prerequisite courses before applying to the nursing degree program to finish the upper division on the Houston campus. Following graduation, her ultimate goal is to become a nurse practitioner (NP), which will enable her to prescribe medications to her patients and provide care for their health needs “on a much cheaper scale,” she added.

“As a nurse practitioner, I’ll have the flexibility to open my own practice,” Warsi said. “Down the line in my life, I plan on opening a clinic in a side of town that is not as affluent or wealthy to provide an excellent level of care for patients at the lowest flat rate cost that they can afford. To me, health care is serving humanity. If I just wanted a career that made money, I could have chosen something else; however, I want to make a difference in someone's life.”