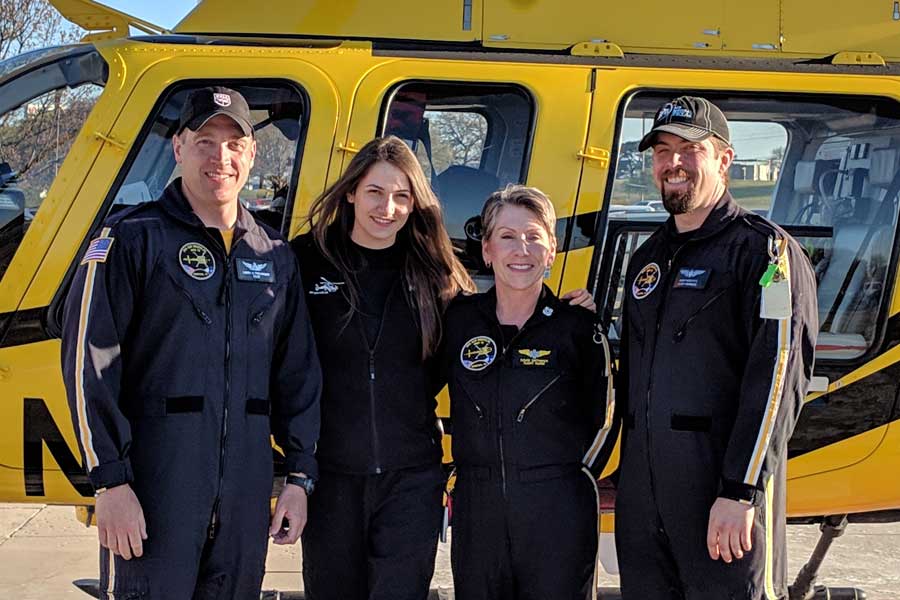 March 23, 2021 – DENTON – Stories and pictures from her grandfather’s time flying and jumping out of helicopters in Vietnam always fascinated Elyse Moody. While choppers are an integral part of her work these days, the focus of her dream job as a flight nurse with PHI Air Medical is more about putting patients into them.

Moody (BSN, 2016) worked the beginning of her career with the singular focus to become a flight nurse. As soon as she could, she applied and took the job less than four years into her career. She will be training through May.

“It’s always been the coolest job I could think of,” Moody said. “I definitely made the right decision.”

Moody knew as soon as her first year of college that she wanted to be a flight nurse and became more enamored with the idea when flight nurses visited the TWU T. Boone Pickens Institute of Health Sciences - Dallas Center. She sought out flight nurses as mentors and tagged along to observe long before graduating. While doing senior clinicals in Denton, she snagged a seat to ride along with flight nurses any time she could.

On the advice of those mentors, Moody worked in an intensive care unit to start her career. The ICU offered her a broader background to prepare for the intense situations she may face. Recently, her crew landed, diagnosed, treated and took off in a mere seven minutes.

“I’m still getting used to showing up on scene, meeting with the crew of the ambulance, stabilizing patients, and assessing interventions,” Moody said. “But I love the critical thinking aspect that is required – trying to anticipate what’s next while I figure out the puzzle in front of me.”

It is no surprise to Moody that she is drawn to the combination of flight and care. As a teenager she was involved with Civil Air Patrol, Fire Explorers and Community Emergency Response Team (CERT).

With the Civil Air Patrol, Moody and her father drove to Houston to track airplanes for support during Hurricane Ike in 2008. With CERT, she participated in searching for local missing persons and worked with FEMA. It was her time with the Fire Explorers that led to her pursuing an EMT certification.

Now a paramedic in addition to a nurse, Moody calls on her previous experience every day on the job. She credits her broad experience during clinicals at TWU for providing a wide-ranging knowledge base. 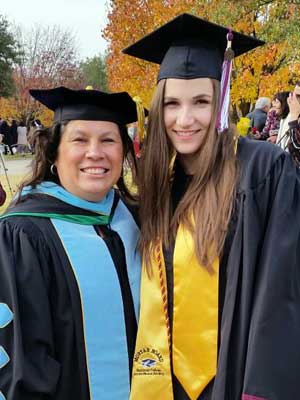 “Other schools don’t really provide such a broad experience during clinicals like I received at TWU,” Moody said. “I literally spent time in every area of the hospital, and it pays off today.”

Moody enjoyed her time at TWU and even was able to share it with her mother who was one year ahead of her in the College of Nursing.

As a flight nurse, Moody says she has a better opportunity to save lives. They can carry and administer blood, place a chest tube, put a patient on a ventilator, and have other capabilities that an ambulance crew does not. She has already seen how grateful patients in dire need are when she can help.

After being mesmerized with her grandfather’s stories, Moody realizes she is living through amazing stories of her own.

“When we land at a hospital, even the EMTs think our job is cool.”