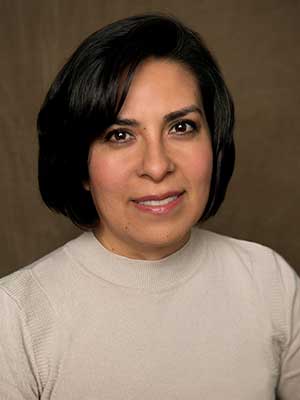 Sept. 1, 2021 — HOUSTON — Angeles Nava, PhD, knows from personal experience the mental anguish a person can suffer when they are in an abusive, violent relationship. She saw the emotional and physical toll it took on one of her sisters years ago.

So when Nava, an assistant professor of nursing at TWU’s Houston campus, joined a research project that studied women who were victims of intimate partner violence, it was close to home.

The study had particularly important elements because it examined abusive relationships of 300 women in Harris County, many of whom were women of color or immigrants. Nava grew up in rural San Luis Potosí, Mexico, in an impoverished community with 11 siblings and in a home with no electricity. She would later learn that many women in her community were victims of domestic violence.

“This is a huge problem within the Hispanic population,” Nava said. “Many times, women are afraid of their abuser and keep the abuse secret.”

Participants in the seven-year study had sought some type of intervention for the first time, with half seeking help through the legal system and the other half relocating to shelters for abused women. The research found that about two-thirds of women seeking help reported an improved mental state within two years following some kind of intervention.

More specifically, researchers found that women who sought help within the legal system improved their mental health faster than those who sought intervention through relocation to a shelter. Those who sought legal intervention tended to do so earlier in the abusive relationship than those who relocated to shelters, which meant the participants who sought legal redress tended to suffer abuse for shorter periods than their study counterparts, Nava said. Subjects who were in abusive relationships longer tended to need more time for their mental health to improve once they were out of their abusive situation.

The study, led by TWU Houston colleague Dr. Judith McFarlane, found that after all of the participants sought intervention, more resources became available to them to improve their living conditions, allowing them to heal mentally.

Nava took the study a step further and examined how immigrant women faired once they began seeking interventions. Interestingly, she found the healing process slowed for women who were still attempting to acculturate to life in the United States. Although the research didn’t find an exact reason for that, Nava postulated that it could be traced to cultural differences.

“Mental health is not talked about in the Mexican culture – and it could be seen instead as laziness,” Nava said. In 2018, she participated in a smaller study of abused immigrant women in Brownsville, Texas, examining the experiences of Latina immigrants in a long-term support group led by a bilingual nurse.

The findings in that study showed much more positive results among the immigrant women. “The women felt they had a safe place to share their stories with other women who also had experienced violence,” Nava noted. “They felt that attending the support group helped them transform themselves from victims to survivors, they felt empowered and they felt a sense of community. They even felt they could advocate for each other. Some women shared how the long-term support group was helpful because the effects of violence can last for years — it does not stop when a woman leaves the abusive relationship. Also, being able to have meetings in their native language helped them better share their experiences, which led to better outcomes,” Nava added.

Sharing a common language while engaging in serious discussions is something else Nava can relate to. After growing up in rural Mexico, she came to the United States when she was 19 knowing no English. Although she had obtained a high school diploma in Mexico, she decided to pursue a G.E.D. while living in Houston with relatives so she could improve her English before enrolling in college.

She initially came to the United States to pursue an education relating to computers or accounting, but it wasn’t surprising to her that she developed an interest in health care.

“I helped take care of my grandfather when he was elderly and later I met another person who needed medical care, so that kind of piqued my interest,” Nava recalled.

After earning an associate’s degree in 2001, she became a registered nurse, then attended Texas Woman’s in Houston to obtain a BSN in 2003, an MSN in 2005 and her PhD in 2010. It was during her last semester of her PhD program that she joined the research team. The study began with a two-year grant and ultimately expanded to seven years, producing more than 50 publications, Nava said.

“The most important thing to know (about abusive relationships) is that there is help – and that there is nothing to be ashamed about,” she said. The National Domestic Violence Hotline, 1-800-799-SAFE, is free, confidential and is open 24 hours every day.