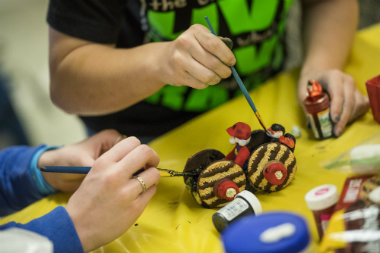 From “Wreck It Ralph,” to “The Magic School Bus” and even “Stranger Things,” judges saw it all at Texas Woman’s University’s 20th annual Edible Car Contest.  On Jan. 26, more than 200 students from Denton and Tarrant counties competed for recognition for the fastest and most unique car made entirely of food.

The competitors were graded on their cars’construction, look and use of materials. Wheels were made using salt, cookies, candy and fruit. One team melted down candy to make the base of its car. The biggest challenge for students was sending their cars down a ramp three times in a timed race. Parents and students sat on edge hoping their cars made it down in one piece. Teams with the fastest time (1.36 seconds) and second fastest time received Texas Motor Speedway race tickets.

The more than 40 cars were then judged for first, second and third place overall. Winners included:

The Edible Car Contest started as a classroom assignment to promote creativity and design in the context of math. The competition became so popular, others on campus were soon invited to participate. In 1999, the contest was opened to the general public. The program is designed to encourage girls’ interest in science, technology, engineering and math (STEM). At least two of the four team members must be girls.

To see more on this year’s competition, visit NBC5 for additional coverage