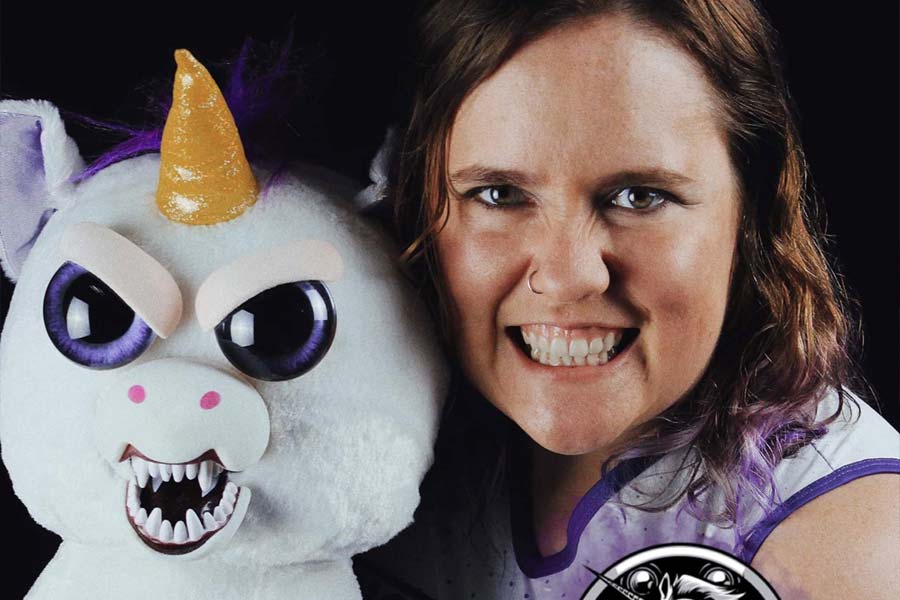 Aug. 18, 2022 – DENTON – Shawnda Smith is accustomed to performing calculations in her role as a math teacher at Texas Woman's University. But she does some special computations in an arena outside the classroom.

And how much force is needed to take out that jammer.

Because Shawnda Smith, PhD and assistant professor of mathematics, is a roller derby queen.

"Many people have never heard of roller derby," Smith said. "They ask, 'where's the ball?' There is no ball. Some will ask, 'is it actually a sport?' Yes, just not a traditional sport. A lot of people are very interested when you tell them. A lot people haven't seen it before. They might have a seen a picture, but they haven't see a game."

Teams of five players each skate on an oval track and score by having a designated skater, called the jammer, lap the skaters on the other team. The other skaters, called blockers, try to stop the opposing jammer and open up lanes for their own jammer.

It's a full-contact sport, but this incarnation is not your parents' – or grandparents' – roller derby.

The sport grew out of marathon roller skate races in the late 1800s and early 1900s, which evolved in the 1930s into short-course team competitions on a small, banked track surrounded by a railing. Beginning in the late 1940s, it was broadcast on network television, and teams like the Thunderbirds and Bombers became national names. The popularity peaked with the 1972 movie Kansas City Bomber, starring Raquel Welch.

By the 1970s, however, the sport had become a caricature of itself. The contact had devolved into exaggerated carnage, with skaters being sent flying over the railing. Attendance and ratings declined, and when expenses outpaced income, it was doomed.

Roller derby didn't die, but transformed into something its earliest stars could never have imagined.

"Derby is a very interesting community," Smith said. "It spans a lot of different professions, and the derby community accepts everyone, different sizes and backgrounds. You have people who are incredibly shy and people who thrive in social situations. It's a unique community where everybody is welcome, no matter what."

While a handful of banked tracks remain, the sport primarily takes place on a flat track. The railing is gone, and spectators bring chairs and sit on the edge of the track, though children are not allowed on the front row for safety.

Smith got started while in Austin, where she earned her master's and PhD.

"My neighbor was the medic for the roller derby team in Austin," Smith said.

Let's pause to consider that statement. How many of your hobbies require a team medic?

"I told her I didn't know anything about roller derby, and she told me she'd get me in for free," Smith said. "I went, and it just felt like these were my people."

After getting over understandable nerves, she was instructed how to turn and fall (on your pads, not your butt). Her husband bought her skates for her birthday and she joined the recreational league in Austin.

"That was 10 years ago," Smith said. "My derbyversary just happened this summer. I skated throughout my PhD, and when I got a job in Bakersfield, California, I played in a league there. That was one of the things I looked for when I applied for jobs. I Googled where is the closest league, making sure there was one." 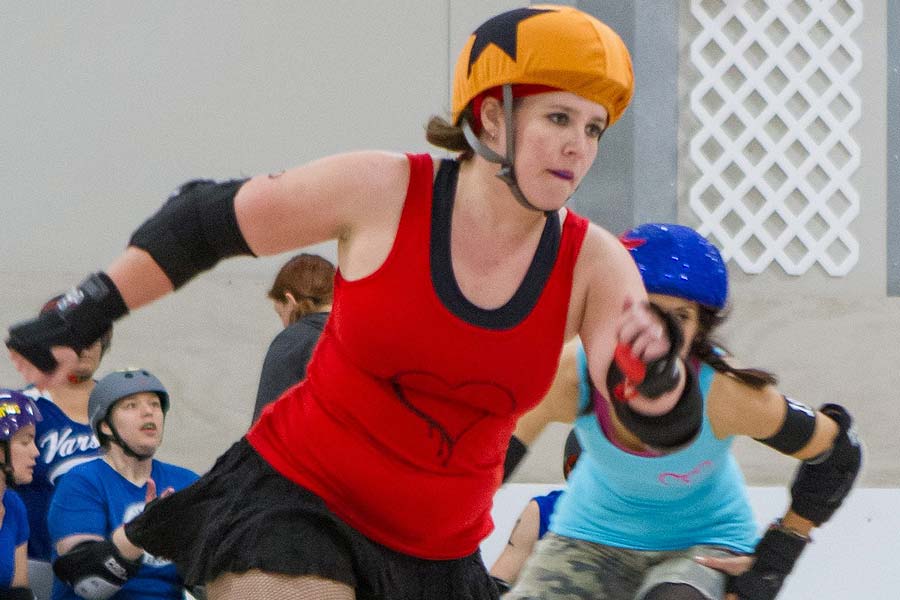 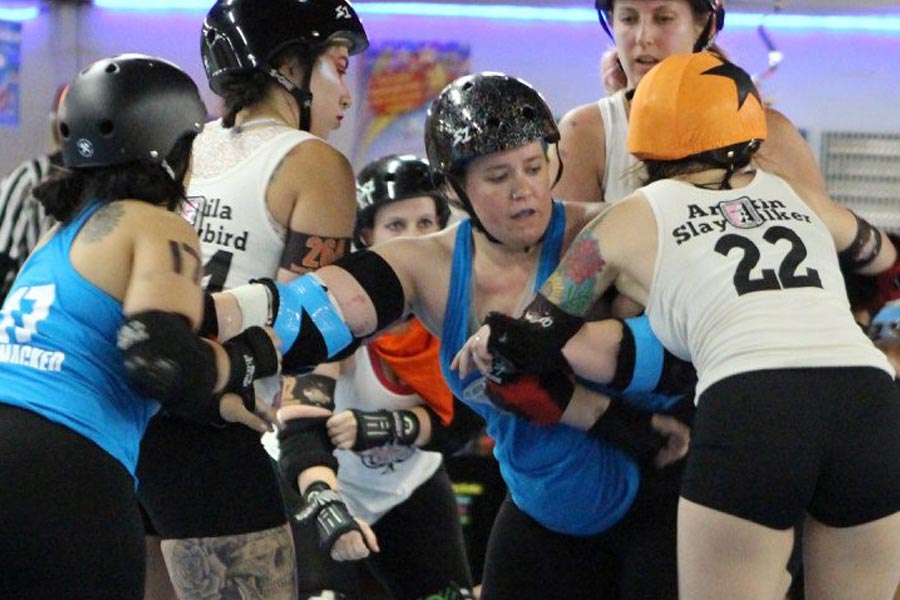 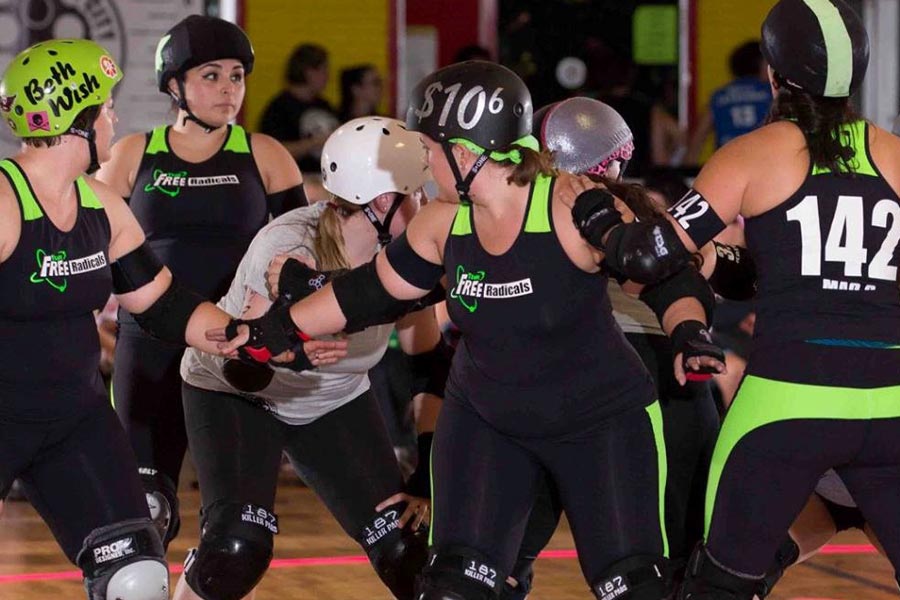 After moving to Denton, she joined the local team, which is now known as the Fighting Unicorns. The team skates at Lone Star Indoor Sports, an indoor roller-hockey rink.

One thing that has remained from derby's heyday is the use of derby nicknames. Old school names like Psycho, Elbows Anderson and Skinny Minnie have given way to literary puns such as Grimm Scarytales, Pain Eyre, Tess of the DerbyWheels, Scratcher in the Eye, Emily Deck’erson, Pippi Longstompings, Rapunchel and Lady MacDeath.

Smith is Shawndog Millionaire, and her number was a mathematical expression of millionaire: $106 (ten to the sixth). It caused confusion for announcers without a math background, and the rules were changed to disallow superscript and symbols. Now she's just 106.

While the names suggest mayhem, modern roller derby is much tamer. The grit and determination remain, but the intentional elbows are gone. Usually.

"We can't do elbows," Smith said, but she laughs. "There are all these rules about legal hitting zones. You shouldn't be hitting people in the face. Shouldn't have bloody noses, but it happens. You fall or trip and somebody hits you in the face and you've got a bloody nose. It's not supposed to happen. If you do something bad, you go to the penalty box, like in hockey."

But those accidental, shouldn't-happen bloody noses and black eyes can lead to some awkward conversations.

"I tell my students ahead of time that I may walk in with a black eye," Smith said. "Hey, don't worry, it's okay, I play a sport where this can happen. That's a common thing that happens to derby women when we go to the doctor. They ask if we need to talk about something. I appreciate the question, but, no, I do roller derby."

"It's a very common injury in derby," Smith said. "If you get injured, it's usually a shoulder or an ankle. You can get hurt by falling, break fingers or whatever, but the biggest one is your ankle breaking. You don't just break the bone, you tear all the ligaments. Usually you have surgery to fix it, so there's a whole group of bionic derby people. A lot of people have that. It's just, the club."

Which includes Smith, who broke her left ankle while she was living in Austin.

"My surgeon asked if I'd be willing to have students watch the surgery, because it's an unusual injury. It's different being on skates and breaking your ankle as opposed to being on shoes. Austin is a really big derby community, so he wanted others to watch because that injury was going to be very common."

After moving to Denton, she broke the right ankle. The entire sport shutdown during the pandemic, and though matches are slowly coming back, Smith has recently been out of action for another reason.

"The common joke is, it's the mandatory nine-month hiatus," said Smith, who in May gave birth to her first child, Josie Luna.

"She was born during the lunar eclipse, so we called an audible on her name," Smith said.

But Smith will be back on the track.