The TSGC Design Challenge, sponsored by NASA, offers undergraduate students an opportunity to propose, design and fabricate a solution toward solving research objectives of importance to NASA and its mission. The 20 competing university teams participated virtually in a Q&A session with judges after submitting a poster, mid-term report and video presentation. 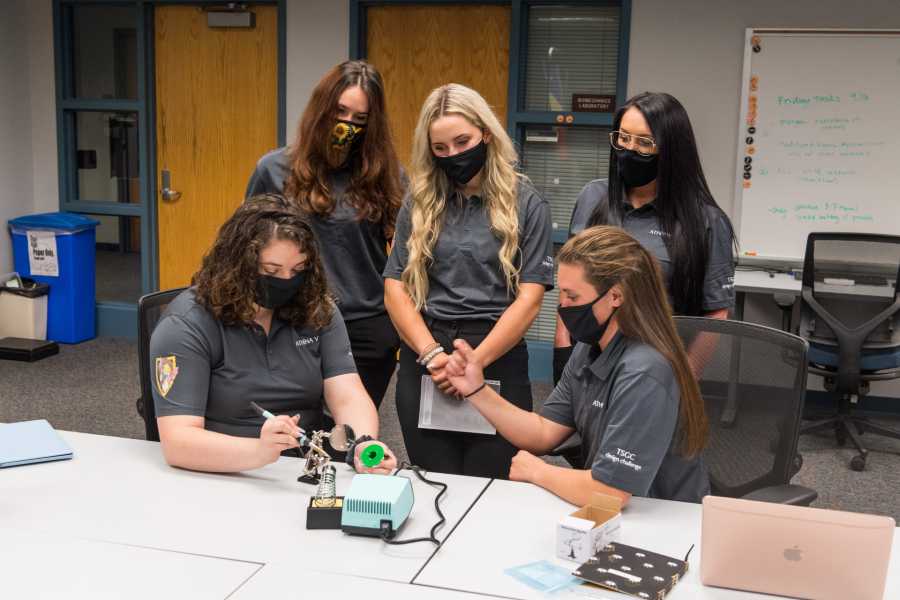 The TWU team—consisting of Lexi D’Abrosca (team leader, Carrollton, Texas), Cheyenne Allen (design lead, Seagoville, Texas), Madilyn Sieber (research lead, Lawton, Oklahoma), Morgan Beckham (design/research, Plano, Texas), and Karis Nowell (design/research, Plano, Texas)—decided to tackle the problem of uneven blood distribution in a microgravity environment resulting in intracranial pressure, or “space headaches,” in astronauts. During the Space Shuttle program, 69% of male astronauts and 55% of female astronauts reported headaches during short missions. The prevalence of headaches during long duration missions onboard the International Space Station is approximately 70%. The most commonly reported cause is an abnormal distribution of blood/fluids and pressures throughout the body when in microgravity. 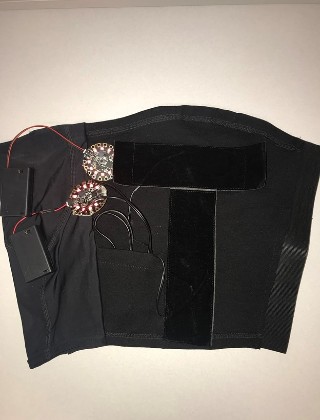 The TWU team’s solution to this problem was to construct a heated calf sleeve to increase blood flow to lower extremities and alleviate headaches experienced during weightlessness.

“After determining the associated factors related to the occurrence, our team identified a plausible method of preventing them by the way of heat,” said D’Abrosca. “Once we calculated the prospective parameters for heat, our team produced a prototype garment that houses a heating system and microcontrollers.”

The team created a double-layer compression sleeve that encompasses a heating device, a temperature sensor and a rechargeable battery. The base layer of the garment is a nylon and spandex compression sleeve that astronauts will wear on both calves. The middle layer is made of rayon, nylon and spandex and has carbon tape sewn into it. Further, the wires are connected to the carbon fiber tape using silver glue. This section also includes Velcro that wraps around the base layer, allowing the garment the ability to adapt to different calf sizes. This feature was included to account for the potential muscle atrophy that many astronauts deal with when in a microgravity environment for long periods of time. Carbon tape has the ability to conduct heat throughout the entire garment. The middle layer also includes an NTC thermistor that senses how hot the garment gets throughout the time the astronaut is wearing it. Once able to sense the temperature, it can be controlled using an external controlling system. The last layer is made up of a 5V battery that is attached to the garment by a pocket. The battery is rechargeable through a universal USB port. 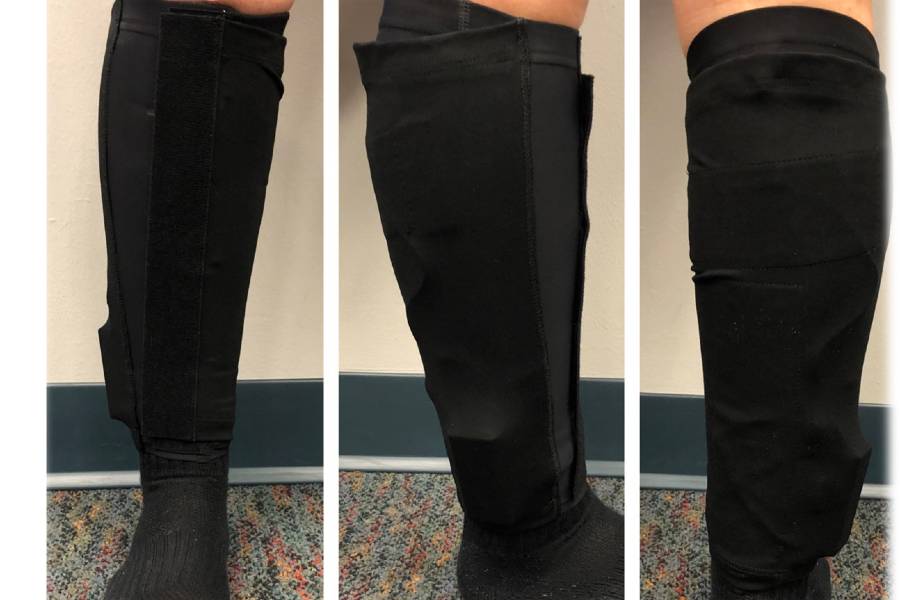 After successfully constructing the prototype, the team used a heat gun to produce extreme temperatures for testing their device, which passed all tests. The team determined their project was an appropriate platform for further enhancement, scalability and testing, which will be done by different students on the spring 2021 semester team.

“In our third year of competing in this Design Challenge, we have once again set the bar high for future teams at TWU,” said Rhett Rigby, PhD, associate professor and faculty advisor. “I am very proud of the work that this team accomplished this semester. The ability to apply theories from the classroom to a multi-disciplinary project is not an easy task. These young women faced challenges head-on this semester and produced an elegant solution to a longstanding problem facing astronauts.” 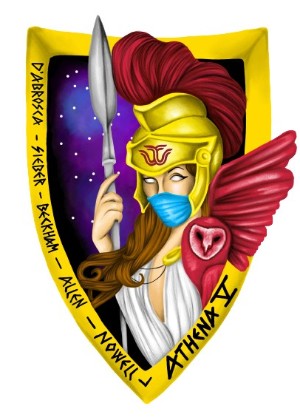 For the competition, the team also designed a patch to represent and reflect who they are. The center of the patch design focuses on Athena, the Greek interpretation of Minerva, who is the goddess of wisdom, handicraft and warfare. Being that this was the first all-female team from TWU, the students felt that she encompasses what they all stand for. The owl is both significant as TWU’s mascot, Oakley, and as a Greek representation of fierce intelligence. Together, the owl and Athena depict NASA and TWU’s standard of excellence.

“We chose to incorporate the mask that Athena is wearing in our design because it represents not only where the world is now due to COVID-19, but because we each individually have experienced our own personal strife as a result of the coronavirus,” said D’Abrosca. “The outer space background is indicative of our individual journeys with respect to where we are going in the future, as well as the endless possibilities that NASA holds.”

Being a part of this semester’s TSGC Design Challenge team and working with such a talented team and collaborators has been an incredible experience. I am really proud of what this team has accomplished and excited to see where each of us go in the future. -Lexi D’Abrosca

Being a part of the TSGC Design Challenge was a unique experience for me. I was given the opportunity to expand my horizon, work with an amazing group of girls and watch our project come to life. I am extremely proud of the work we have done and will be forever grateful to take part in this experience. -Cheyenne Allen

The opportunity to be a part of the TSGC Design Challenge has been a dream come true because growing up, I have always wanted to work for NASA just like my role model Mae Jemison. This once in a lifetime occasion has given me the experience to work with a group of amazing women that I will always treasure. -Madilyn Sieber

The opportunity to be a part of such an incredible experience as the TSGC Design Challenge has been truly life changing. This internship has revealed layers about myself that I didn’t even know existed, and getting to experience this with four other smart women is incomparable. -Morgan Beckham

Being a part of the first all-female TSGC design team was not only a privilege, but an honor. I believe we were able to embody our team name and mascot, Athena, as we combined our knowledge and creativity into our project. I am extremely proud of all we were able to accomplish given the current COVID situation. -Karis Nowell