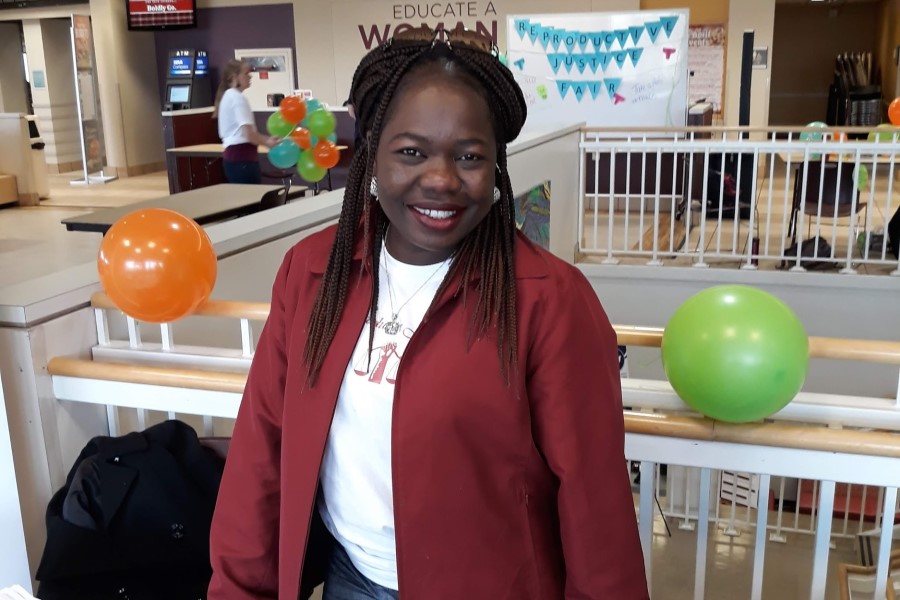 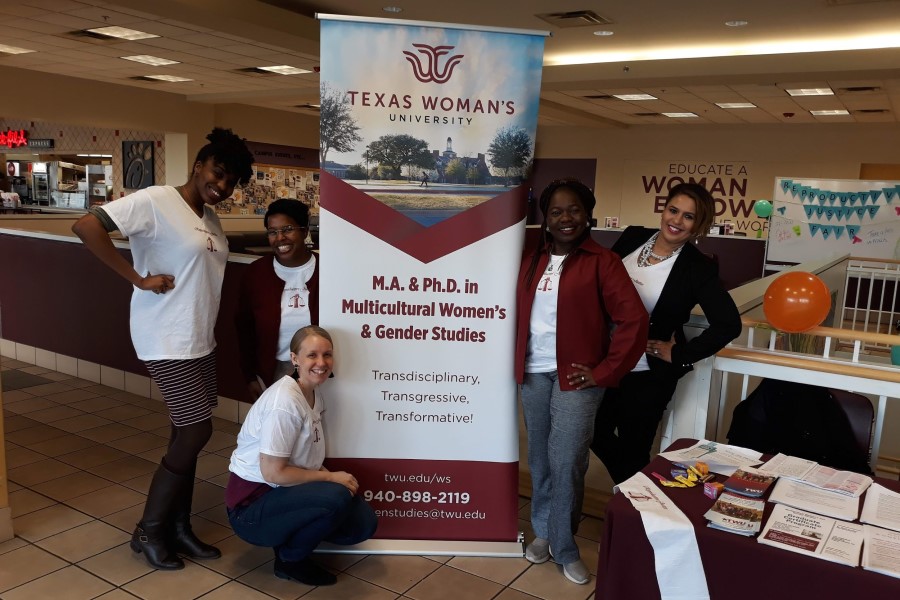 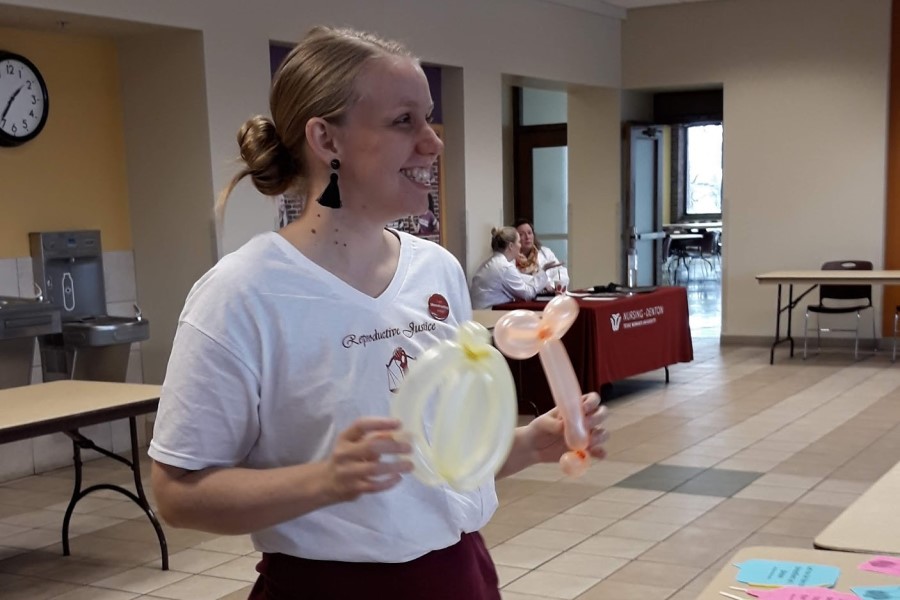 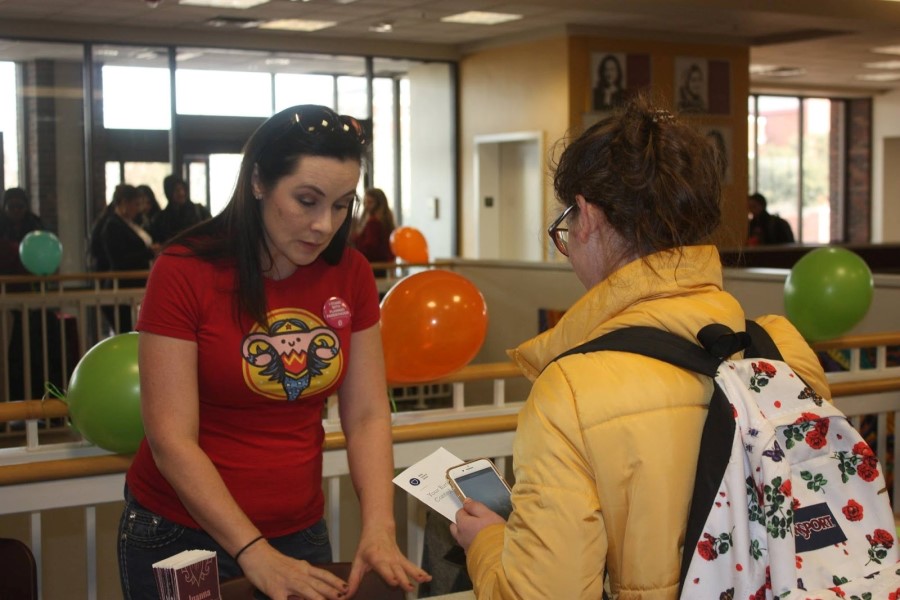 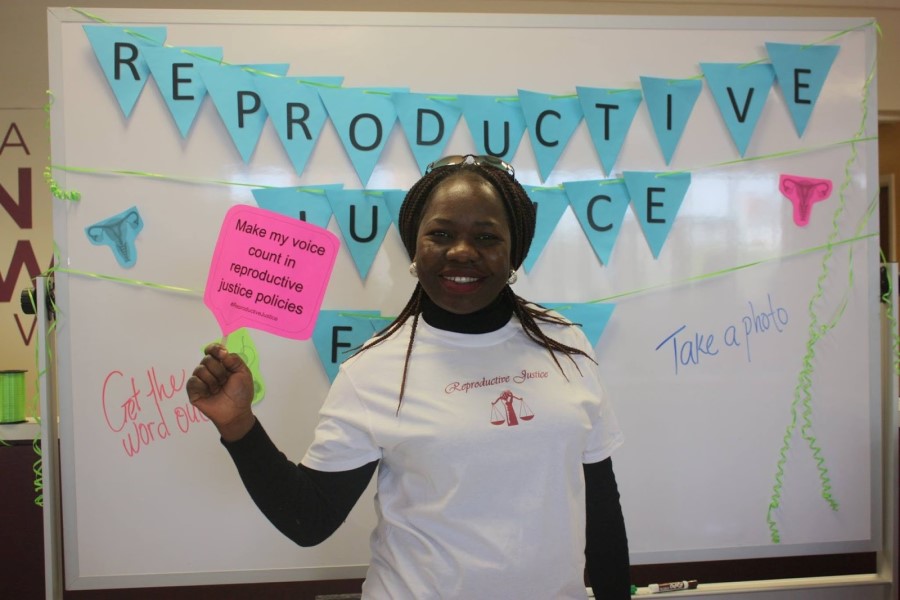 Esther Ajayi-Lowo shows off one of the message signs for the photo booth at the fair. 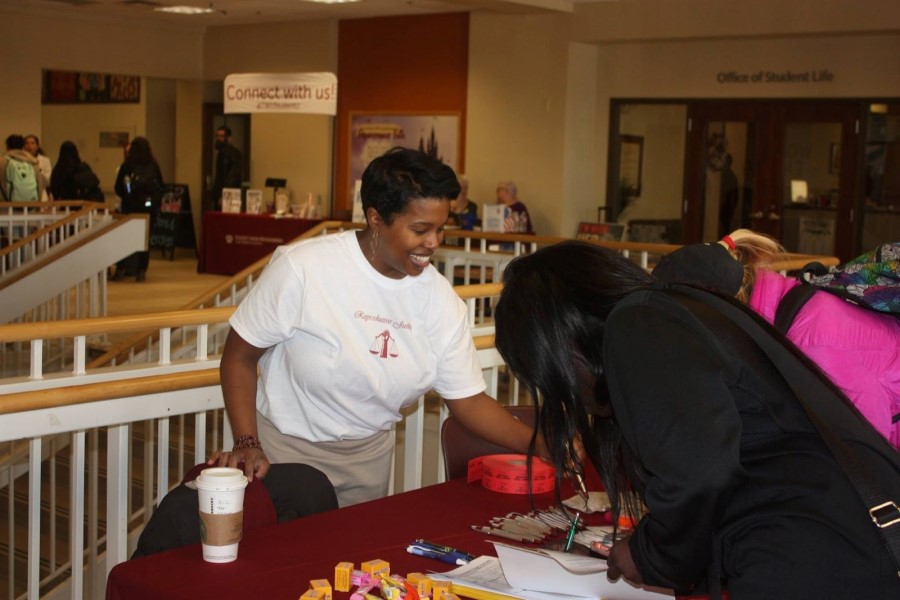 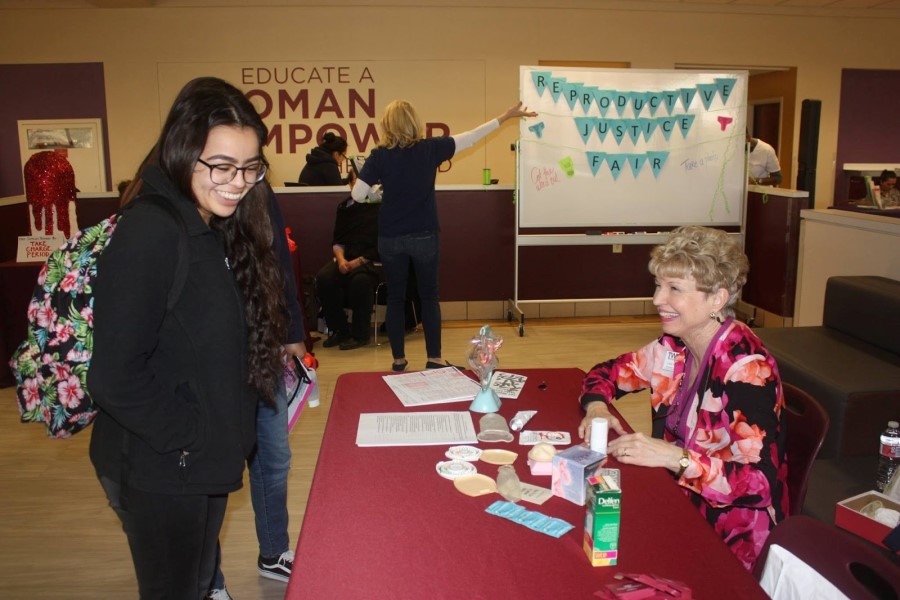 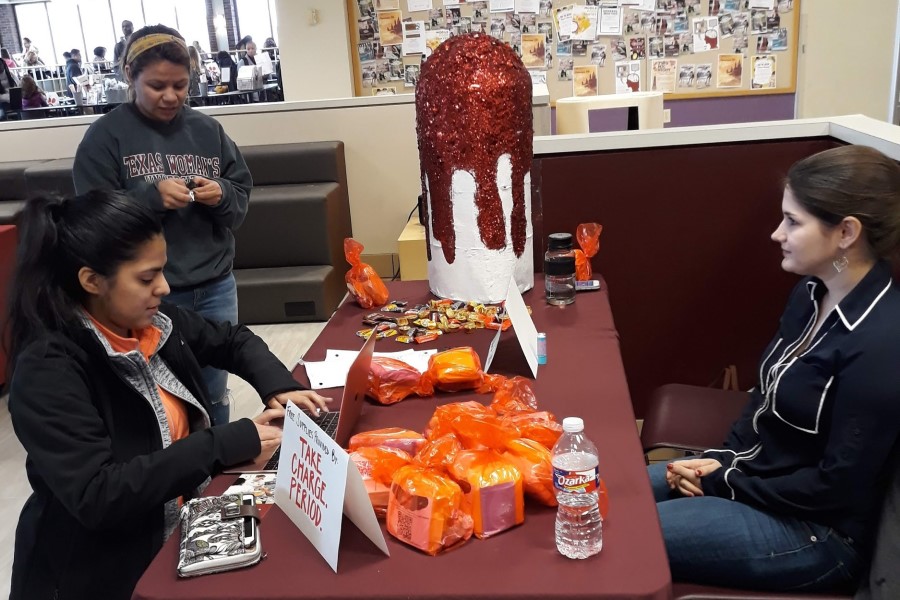 The Sexual Health Taskforce, a group of graduate students and faculty advocating for menstrual product access at TWU. 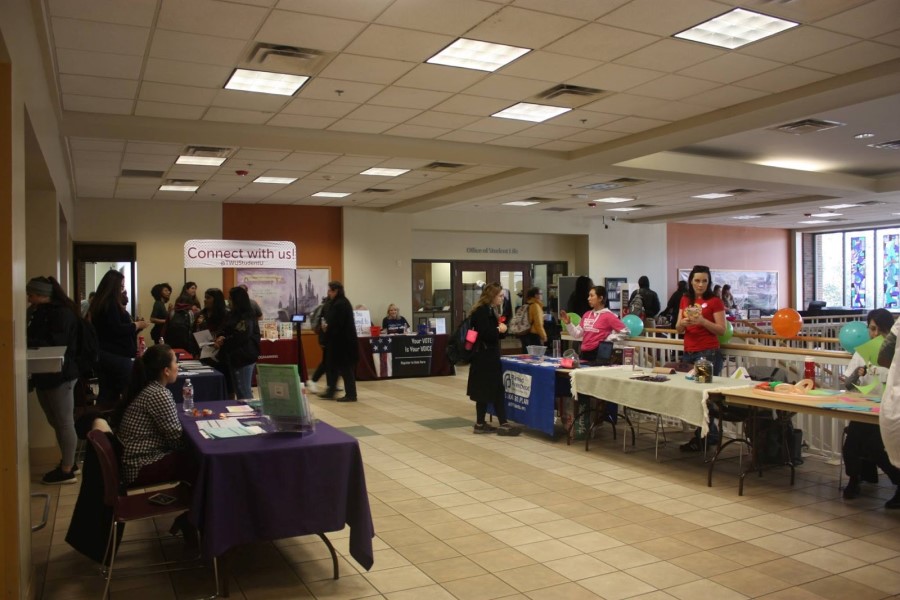 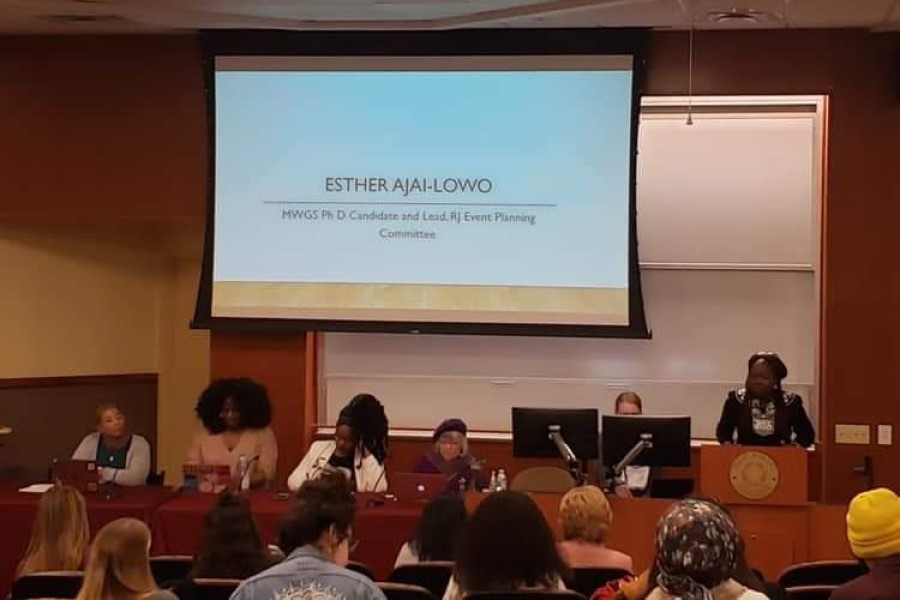 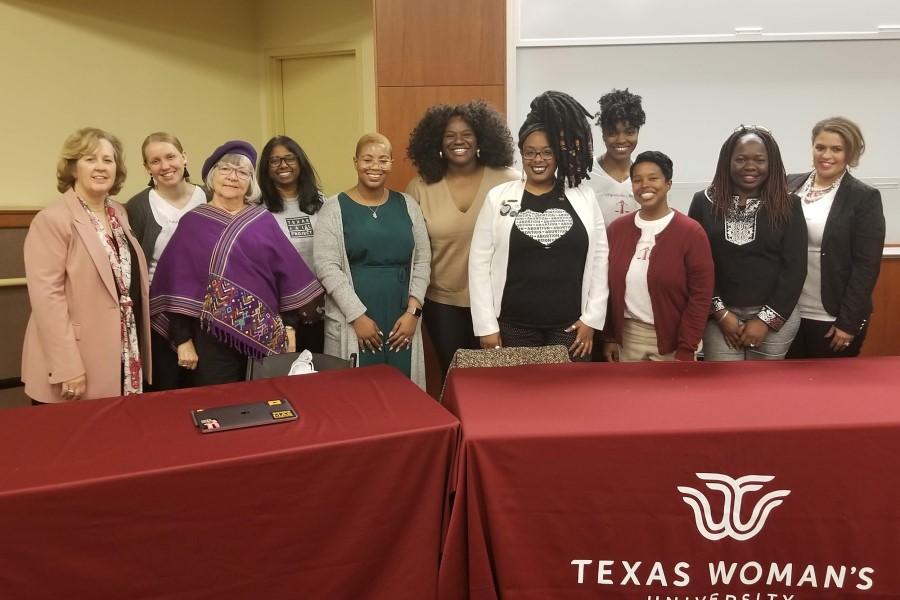 Planning committee members and panelists pose together after the Policies, Politics, and Reproductive Justice Panel on March 6.

Esther Ajayi-Lowo, Marcella Clinard, and Foluso Oluade, all doctoral students in Multicultural Women’s and Gender Studies (MWGS), decided to build on the success of last year’s event by dreaming bigger for this year. The group first sought the sponsorship of their home department and their graduate student organization, and then reached out to other interested students to join the planning committee. Other MWGS graduate students Morgan May, Karen Bravo, Chelle Wilson, and Veronica Popp joined in to help bring Esther’s vision to reality.

“Policies, Politics, and Reproductive Justice,” a fair and panel event held on March 6, a few days before International Women’s Day, was the result. From 10 am to 2 pm, fifteen university and community groups tabled in the student union, quizzing students on their reproductive health knowledge, passing out free menstrual supplies, discussing midwifery, birth control, affordable healthcare options for families, and even distributing brightly-colored balloons in the shape of genitalia. In addition to providing students with a chance to learn about resources for their own reproductive health, the planning committee wanted to encourage students to think about the politics and policies that influence people’s ability to make decisions about their own health. The Texas Jail Project, an activist organization that advocates for better treatment and healthcare for Texas inmates, talked to students about the difficulties that pregnant women face when they are incarcerated. IGNITE, an organization that encourages women to run for office, talked to students about ways to get involved in influencing politics, and a nonpartisan voter registration drive registered and updated the registrations of young voters.

Following the reproductive justice fair, the planners held an expert panel discussion from 4 to 6 pm with free pizza. The panel discussion brought panelists including scholars and community organizations with reproductive justice mandates from the Dallas Fort Worth Area (DFW) to speak on diverse reproductive justice issues. Participants included Dr. Claire Sahlin, the Associate Dean of the College of Arts and Sciences and Professor of Women’s and Gender Studies; Diana Claitor, the Executive Director of Texas Jail Project (TJP); Kamyon Conner, the Executive Director of the Texas Equal Access Fund (TEA Fund); Emma Robinson, The Digital Organizer at the Afiya Center; and Cydnie Drake, the Texas program Coordinator for IGNITE National.

Esther Ajayi-Lowo, a PhD candidate and the reproductive justice planning committee chair opened the discussion with a welcome address that discussed the rationale and goals for the event. According to Esther, there is no better time and place to engage students and activists on reproductive justice issues than in the U.S., the “developed” country with the highest maternal mortality rates, and in Texas, the state where these rates are highest. Esther also noted that discussions of reproductive justice are particularly apt for TWU, which has a student body that is predominantly women of color, a group who bears the highest brunt of maternal mortality in Texas and in the U.S more broadly.

Emma Robison, the third panelist, noted that maternal mortality rates among black women in the U.S are not just rising now, but have remain high since the time of slavery. Buttressing this statement with facts and figures, she also discussed the work that the Afya Center does to bring down maternal mortality rates among black women. Emma encouraged students to join, intern, and volunteer with community reproductive justice organizations such as the Aifya Center in order to improve access to reproductive justice. She also noted the power of each student using social media as a tool of advocacy to educate and raise consciousness.

The question and answer session was moderated by Dr. Sahlin. Some of the questions asked by participants stirred discussions on the negative impact of Crisis Pregnancy Centers (CPC) on women’s access to comprehensive sexuality education and access to reproductive health options. Another highlight of the Q&A session was the discussion of the removal of menstrual products from the restrooms at TWU. Dr. Mollen, the coordinator of the Sexual Health Task Force, a student and faculty group in the Department of Psychology and Counseling, used the opportunity to discuss the group’s advocacy to bring the menstrual products back to TWU restrooms. She also shared a link to a survey asking students to make their voices heard about menstrual products on TWU’s campus.