New issue of Films for the Feminist Classroom available now

We are thrilled to announce that the latest issue of Films for the Feminist Classroom, published through the Department of Multicultural Women's and Gender Studies at Texas Woman's University, is now available.

This issue of FFC offers an exciting collection of tools for educators. In addition to a wide variety of film reviews, issue 9.2 highlights the Denton Black Film Festival (DBFF) with two interviews, one featuring festival Director Harry Eaddy and Director of Film Programming Linda Eaddy and another with Eboni Johnson, director of the DBFF Institute. We also celebrate and look back on the first decade of FFC through retrospectives by Deanna Utroske, who is one of the journal's founding editors, and FFC's current editor. In addition, you can find reviews with concrete, practical information about incorporating a variety of films and videos in your teaching. Topics include farming as a form and site of resistance, sex trafficking, women veterans, US healthcare, the work of artists and the power of art to build community, fundamentalist organizations and activists, alternative legal systems, government practices of disappearing people, and transnational immigrant families in the United States.

AnaLouise Keating, Ph.D., TWU Department of Multicultural Women's and Gender Studies professor and the editor of Gloria’s last book, Light in the Dark/Luz en lo Oscuro: Rewriting Identity, Spirituality, Reality, shared in a conversation with shift7 that it was precisely because Gloria was marked by difference that she grew to challenge the categories of “different.”

Students from the National Trade School for Women and Girls circa early 1920s. With permission from Library of Congress, Prints and Photographs Division.

Danielle Phillips-Cunningham, Ph.D., and Morgan May were awarded a TWU Creative Arts and Humanities Grant in December 2019. The grant will support their research of the Nannie Helen Burroughs papers at the Library of Congress in Washington D.C. Burroughs was an educator, clubwoman and civil rights activist who established the National Trade School for Women and Girls, the largest trade and general education school for southern migrant Black women in the early twentieth century. She also co-founded the National Association of Wage Earners (1921), the first national Black women’s labor union, and The Worker (1912), the first Black women’s national and international labor periodical in global history. Phillips-Cunningham and May’s research will document these historic labor initiatives, and explore how they can serve as important context for women’s political organizing today.

Agatha Beins, Ph.D., an associate professor and director of the Multicultural Women’s and Gender Studies Master’s Program, will be the featured speaker at the Resource Center and the Dallas Way's LGBTQ Speaker Series next week. Beins will talk about the content of the quilt and the paths it offered for people to learn about HIV/AIDS and to build community.

Jessica Camp, TWU Multicultural Women's and Gender Studies M.A. student and coordinator of academic transitions at the Pioneer Center for Student Excellence, is one of only 10 administrators in the nation selected for the National Academic Advising Association (NACADA) – The Global Community for Academic Advising’s 2019-2020 Class of Emerging Leaders.

Christina Bejarano, Ph.D., is a nationally recognized author, speaker and adviser on Latina electoral politics and political candidates in the U.S. Her work focuses on the role of women in politics, particularly how women of color shape and influence the electoral environment as voters and candidates.

Karen Bravo and Marie Butler met in while taking Art, Activism, and Social Justice with Dr. Agatha Beins. They learned about art activism and began collaborating on ideas of how they can use their artistic talents to create and inspire change. As a result, they formed Denton Fiber Collective with TWU Assistant Professor of Art, Design & Technology Julie Libersat. Denton Fiber Collective’s artwork will be featured in upcoming Denton Pride celebrations.

Read the story at Denton Record-Chronicle >>

Associate professor of Multicultural Women's and Gender Studies Danielle Phillips-Cunningham, Ph.D., co-organized the TWU's first writing workshop for faculty of color with the Psychology and Philosophy Department's Gabrielle Smith, Ph.D., and Sally Stabb, Ph.D. The organizers' goal was to provide a critical source of professional support for assistant and associate level professors undergoing the tenure and promotion process. This inaugural workshop took place May 13-17 and was co-sponsored by the Center for Faculty Excellence and Deans of the Colleges of Arts and Sciences, Business, and Professional Education. 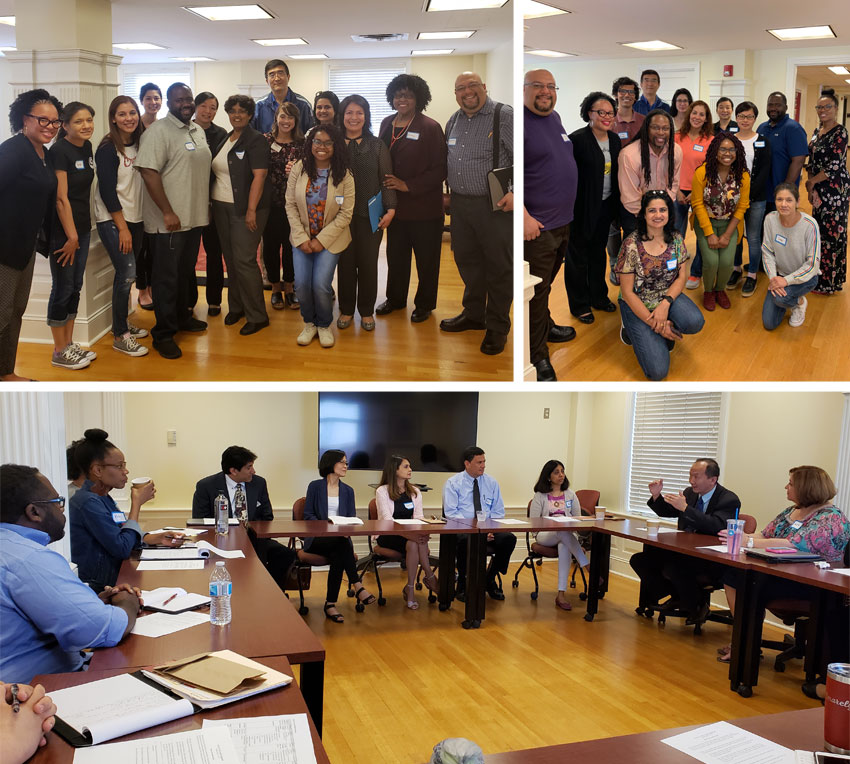 TWU Multicultural Women's and Gender Studies doctoral student Kathy Nguyen was selected by the Research Committee of the Graduate Council as a recipient of the 2019 Graduate Council Award for Exceptional, Original Scholarship. Kathy will be recognized and present aspects of her research at the Student Creative Arts and Research Symposium in a session entitled "Showcase of Student Research" on Wednesday, April 10 at 1:30 p.m. "The breadth and scope of Liberation in Print is impressive. The work expertly incorporates theory with a rich primary archive. It is written in a nuanced and seamless manner that offers important insights on 1970s feminism for both periodical scholars and the general reader," said Mark J. Noonan, professor of English at the New York City College of Technology, CUNY.

I don't really know what to with whiteness: A conversation with AnaLouise Keating

In Teaching Transformation: Transcultural Classroom Dialogues, AnaLouise Keating presents an antiracist pedagogy that is invitational rather than oppositional. Director of the Multicultural Women’s and Gender Studies doctoral program at Texas Woman’s University, Keating has written and edited many works, including Transformation Now! Toward a Post-Oppositional Politics of Change and (co-edited with Gloria E. Anzaldúa) this bridge we call home: radical visions for transformation.

From left to right: Chelle Wilson, Morgan May and Shamethia Webb present at the NAAAS Conference in Dallas, TX on Feb. 11, 2019.

Morgan May (Ph.D. candidate):
"Embodying/Embracing the 'Outsider Within'"

Read summaries of each presentation>>

Multicultural Women's and Gender Studies Cornaro Professor and Associate Dean for the College of Arts and Sciences, Claire Sahlin, Ph.D., has been awarded a $3,000 grant from New York University’s Of Many Institute for Multifaith Leadership to initiate a Faith Zone: Multifaith Ally Training program on TWU’s Denton campus. The funds will be used to begin a three-hour Faith Zone workshop at least once each semester with a goal of enriching campus-wide discussions about religion and spirituality and increasing understanding of religious and spiritual diversity in society

Marie E. Butler, a student in the Multicultural Women's and Gender Studies M.A. program, was recently awarded third place in the Greater Denton Arts Council competition and exhibition, "Materials Hard and Soft." Her work, a quilt titled Black Noise, was one of 68 pieces chosen out of over 1,100 submissions. View the catalog>>

On Jan. 31, Butler also facilitated an intergenerational conversation between fiber artists Taylor Barnes and Barbara McCraw at UNT on the Square.

Multicultural Women's and Gender Studies doctoral candidate Kathy Nguyen recently had her short story, "The Veteran," published by diaCRITICS online. In this short story, Nguyen looks unflinchingly at death, vulnerability, the slight of omission, and the tenuous (in)visibility of South Vietnamese veterans’ official status as “veterans” in America. "The Veteran" was previously published in Kartika Review.

Multicultural Women's and Gender Studies Ph.D. candidate Carla Wilson was featured on the blog Coming Out Sessions, which shares the words of folks who identify as LGBTQ+. "To me, the biggest thing I want to do in the world, or the most important thing to do is to inspire and motivate and really lead by example, more than tell people. Because I don't know what people's journey is." -Carla Wilson

From chronic illness to working with Sandra Cisneros, local poet Edyka Chilomé had a year to remember

Edyka Chilomé is a literary arts activist and cultural worker who uses the mediums of writing, poetry, speaking, teaching, community organizing, and performance. A queer child of Salvadorian and Mexican migrant activists, she was raised in social justice movements grounded in the tradition of spiritual activism. Inspired by her inherited tradition and commitment, Edyka attained a B.A. in social and political philosophy with an emphasis on social justice from Loyola University Chicago and an M.A. in Multicultural Women's Studies from Texas Woman's University, where her research focused on the decolonial power of spiritual [art]ivism.

With an extensive background in research and building narratives, TWU Multicultural Women's and Gender Studies alumna Tara Conley (M.A. '08) joined Montclair State University’s School of Communication and Media as Assistant Professor of Transmedia Storytelling. Conley will be teaching two sections of Transmedia Projects and a course on Communication, Media and Gender.

By the time Esther Ajayi-Lowo earns her doctoral degree from Texas Woman’s University in 2021, she already will have amassed an impressive list of achievements. Since arriving at TWU in 2015 to study multicultural women’s and gender studies, she has received two International Peace Scholarships from the Philanthropic Education Organization (PEO); published a book chapter chronicling the same-sex marriage prohibition act in Nigeria; and presented papers at national conferences on sexuality education, reproductive justice and female genital mutilation— all while balancing her personal commitments as a wife and mother to three young children.

Edyka Chilomé (M.A. '13) is a literary artist, performer, educator, and cultural worker based in North Texas. In addition to publishing numerous articles, essays, and poems, Chilomé recently co-organized the Disrupting Displacement: Art vs. Gentrification event with Vicki Meek as part of the Creating Place Learning Exchange series. Her AlternateRoots.org article, "Gentrifying the Conversation on Gentrification: Resisting the Performative Culture of Whiteness in Dallas Organizing", chronicles her experience organizing the Dallas event.

Agatha Beins, Ph.D., associate professor and director of the multicultural women's and gender studies master's program, has been awarded the UNT Special Collections Research Fellowship for her project, "An Invitation to Remember: Art, Activism and the AIDS Quilt." Beins will analyze the content and material qualities of the quilt to show the multiple paths it offered people to learn about HIV/AIDS and build community with those concerned about and impacted by the virus. She will draw on the activism in the Dallas/Ft Worth area as a case study to show the power of this art-activist project on a local scale.

Agatha Beins, Ph.D., presents a talk on feminist activism in the 1970s at Ithaca College

On March 29, the Ithaca College Department of Women's and Gender Studies presented a talk on feminist activism in the 1970s by Agatha Beins, Ph.D., associate professor in the TWU Department of Multicultural Women's and Gender Studies. In the talk, Beins explored how feminist newsletters and newspapers provided both places and spaces where the women’s liberation movement in the 1970s could exist – in the pages of periodicals and in the streets.

Dr. Marcy Paul, who received her PhD in Multicultural Women’s and Gender Studies from TWU, has been appointed co-chair of the U.S. Academic Task Force on women in multicultural communities. As an assistant professor of health behavior and health systems at the UNTHSC School of Public Health, Dr. Paul’s research and teaching are focused on social justice, health equity and improving quality of life in maternal and child health as a means of building healthier communities for current and future generations.

Dr. Kimberly Parker discusses reproductive health at the intersection of race and gender.

AnaLouise Keating, Ph.D., professor and director of the doctoral program at TWU's Department of Multicultural Women's and Gender Studies, was a featured speaker in a recent panel celebrating the life and works of noted social theorist and activist Gloria E. Anzaldúa. "Remembering Gloria Anzaldúa: A Tribute to the Iconic Borderlands Writer and Thinker" took place at the Smithsonian Latino Center in Washington, D.C., on October 7, 2017. Keating is the editor of Anzaldúa's Interviews/Entrevistas and Light in the Dark/Luz en to oscuro: Rewriting Identity, Spirituality, Reality. Watch the webcast >>