Oct. 31, 2018—Denton—A Texas Woman’s kinesiology team is going where no TWU students have gone before – a project competition in support of space exploration.

Sponsored by NASA and administered by the Texas Space Grant Consortium (TSGC), the TSGC Design Challenge tasks university teams to find solutions to engineering and technical issues related to long-distance space travel. However, this year, the Consortium opened up the challenge to health sciences, which allowed TWU to compete as the university does not have an engineering department.

Faculty advisor Rhett Rigby, Ph.D., assistant professor of health promotion and kinesiology, hand-selected the team of six senior kinesiology students who spent the summer studying musculoskeletal issues experienced by astronauts while in flight. With the assistance of Nicholas Levine, a doctoral student specializing in biomechanics, they quickly narrowed down their research to prevention, mitigation and treatment of lower back pain caused by microgravity.

“Low back pain can significantly impact space flight mission success,” said Team Lead Curt Neeld of Tioga, Texas, who plans to pursue a career as a physical therapist. “In fact, our analysis shows it is the musculoskeletal injury with the highest incidence detailed in NASA’s records of in-flight medical conditions. As we are primarily pre-physical and pre-occupational therapy students, we decided to address this from a rehabilitative perspective.”

With the start of the fall semester, the team conducted initial research and created preliminary designs of the prototype for their project: a garment with integrated technology—an electrical stimulator for muscular activation to be worn by an astronaut while awake.

“Wearable technology is popular right now,” said team member Miranda Moore of Bells, Texas, who plans to become an occupational therapist. “But, creating a garment incorporating technology to be worn in space gets complicated when you have to consider how to recharge the devices and how to dispose of used garments, especially on a mission to Mars.”

To date, the team has submitted two reports outlining its project plan and budget and providing updates on prototype fabrication and experiments. These reports were evaluated to determine which teams are selected for the next challenge level. The TWU design team already received approval to move to Level 3: The Design Challenge Showcase to be held Nov. 12 in Houston.

“The TSGC told us they had a record number of applications (30) for this year’s design challenge,” Rigby said. “We will be one of 14 teams at the design showcase. I am very proud of this team for developing and executing a project that potentially could improve functional health outcomes in astronauts.”

In addition to Neeld and Moore, team members include Alexis Quintana of Aubrey, Arianne Scheller of Houston, and Audra Romans of Bonham, who all plan to earn a Doctor of Physical Therapy degree; and Charles Swieczkowski of Frisco, who intends to apply to a physician assistant graduate program.

Support for the team has come from across the university. The Center for Student Research provided a computer with 3D modeling software to support the design project. An art student in the visual arts department created a mission patch based on a concept developed by the kinesiology students that features the name of the team – The Acolytes of Apollo. The team also approached the fashion and textiles department for help in making a prototype garment to be displayed at the showcase in Houston.

“We are excited that this team has reached across the university, bringing in faculty members and students in other departments for support,” said Diana Elrod, director of the Center for Student Research. “Research support from our office funds all disciplines across TWU. This initiative shows off the multidisciplinary skills of our university.”

The students also received support from outside the university. Zynex, a medical technology company based in Colorado, donated a neuromuscular electrical stimulation unit. REACT: Neuro-Rehab in Addison invited the students to observe and experiment with a clinical-grade electric stimulation unit typically used in outpatient rehabilitation. The team also received feedback from two mentors assigned by NASA.

As The Acolytes of Apollo make preparations to show off their project, they continue to refine and test their prototype.

“We’ve kept an aggressive schedule to complete this project,” said Quintana, who serves as the test subject and wears the garment as his teammates test out the electrical stimulation at different levels. “It’s been a great experience bringing a concept through the design process and into fabrication.” 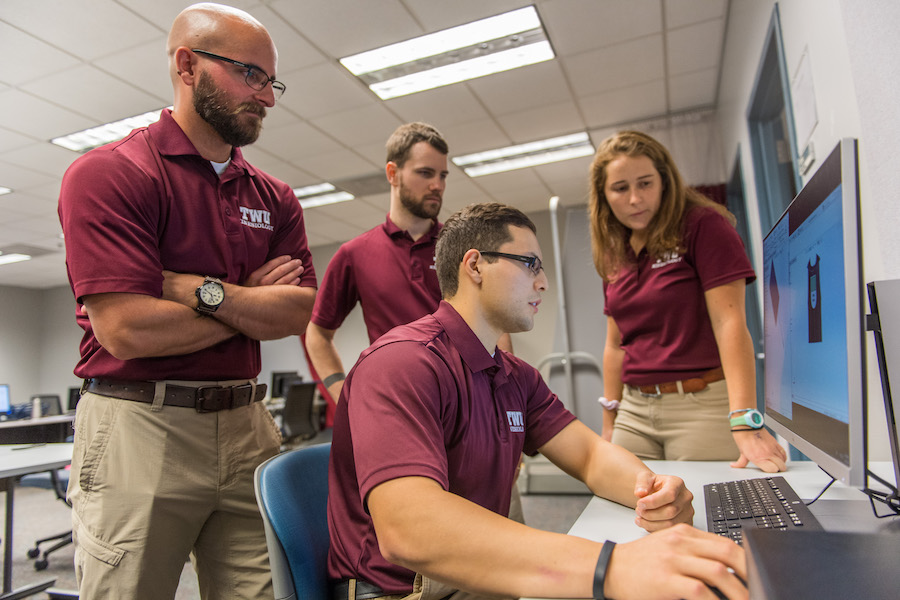 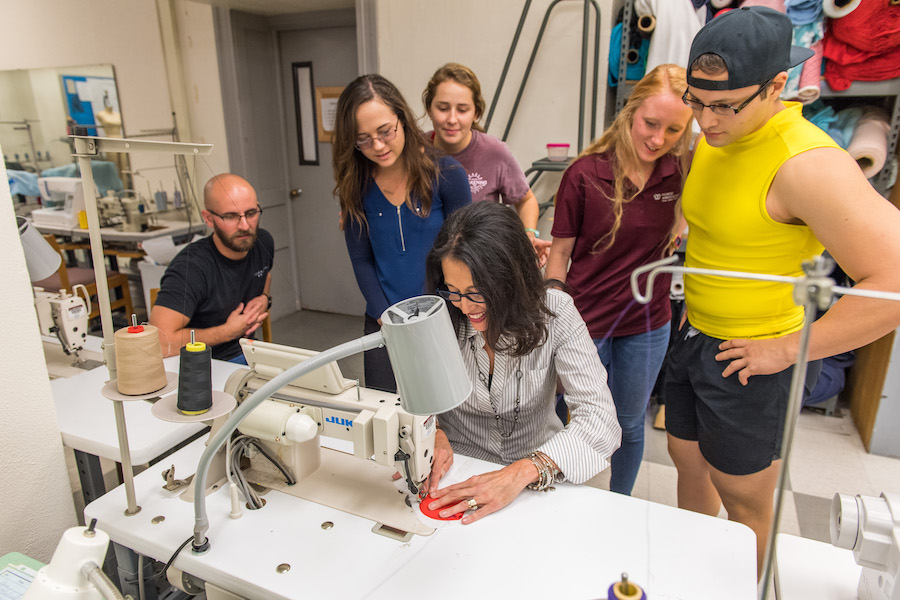 Dr. Sheri Dragoo, TWU fashion and textiles professor, helped the team construct the prototype to be demonstrated at the design challenge. 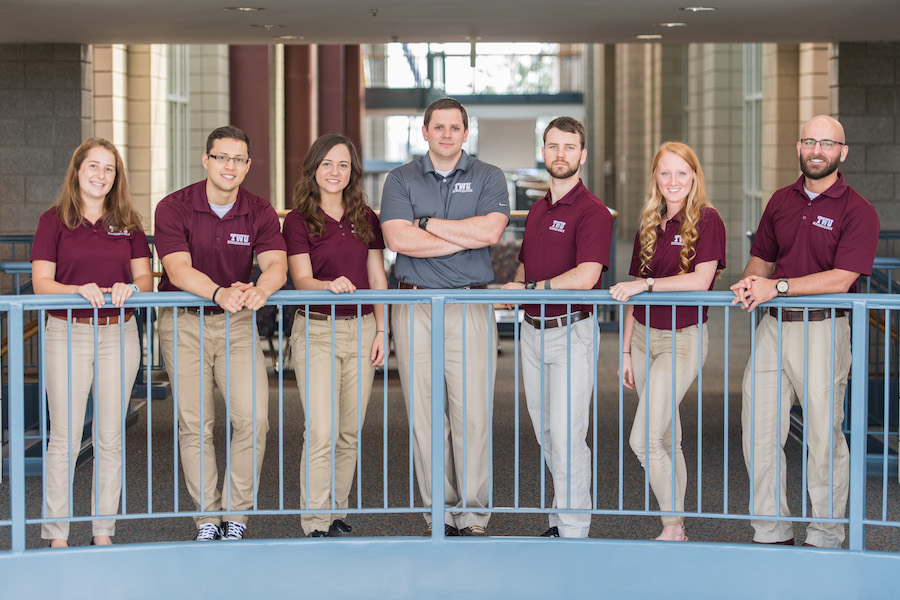 The Acolytes of Apollo with Faculty Advisor Rhett Rigby. 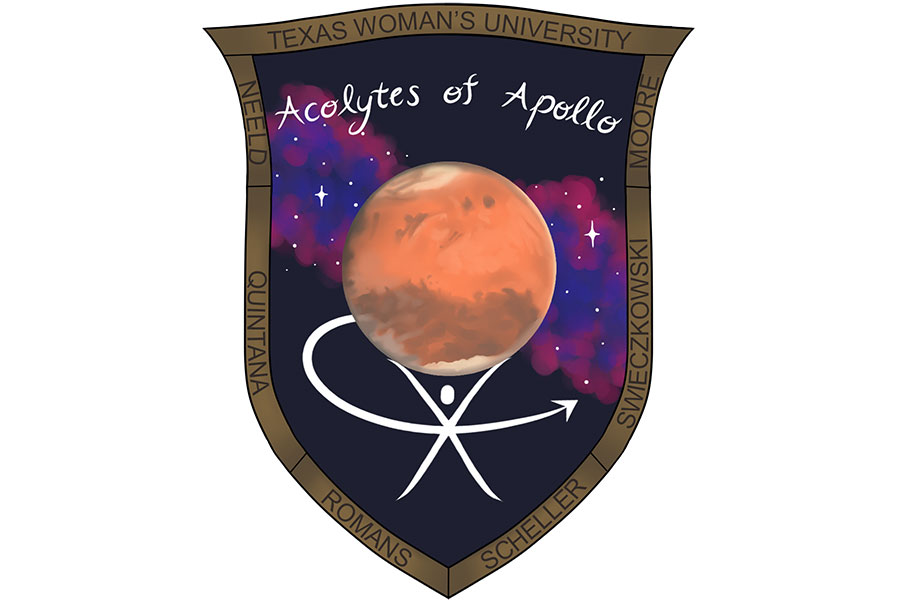 About the Texas Space Grant Consortium

The Texas Space Grant Consortium is a group of 59 state universities, industrial and non-profit organizations, and government agencies that work to ensure that the benefits of space research and technology are available to all Texans. The TSGC is one of 52 nationwide.

Because Texas Woman’s University is an academic affiliate of the TSGC, TWU students are eligible to apply for Columbia Crew Memorial Undergraduate Scholarships and Graduate Fellowships, participate in the NASA Design Challenge team program, as well as other program and funding opportunities. The consortium also focuses on assisting new researchers in establishing research careers, enhancing research collaboration and mentorship with faculty, and conducting research aligned with NASA’s enterprises.