The Texas Woman's University Division of Dance invites a variety of guest artists each semester to work with students in a number of contexts, including master classes, seminars, performances, extended residencies, and choreographic commissions. 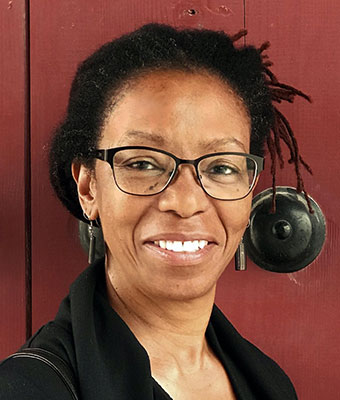 Roma Flowers, a lighting, projection, video designer and screendance filmmaker has worked with theatre, concert and dance productions for over thirty years. Roma is a recipient of the prestigious New York Dance and Performance Award (a.k.a. Bessie), the KOI-USA Knight of Illumination Award 2019 for her projection design for “A Bon Coeur”, a full evening length, solo performer work created and performed by master dance artist, Helanius J. Wilkins and was nominated for the Houston Press Lighting Design Award 2019 for The Catastrophic Theatre Company’s production of “TOAST”. She has designed the lighting for such diverse performing artists as the Alvin Ailey American Dance Theatre, Dark Circles Contemporary Dance, The Dance Theatre of Harlem, DanceExchange, the Doug Elkins Dance Company, Doug Varone Dance. Roma’s latest screendance collaboration with Helanius J. Wilkins, “Dirt” recently premiered at the Newman Center for the Arts at the University of Denver.  Roma is currently a faculty member of Texas Christian University’s School for Classical & Contemporary Dance in Fort Worth, Texas.

“I make dances to reawaken a sense of vitality and ferocious curiosity about ourselves and the world around us. I believe dancemaking is a powerful and necessary form of inquiry and exploration, and that our dancing creates opportunities to see and feel more acutely.” — Matthew Cumbie

Matthew Cumbie (he/him/his) is a collaborative dancemaker and artist educator living in Washington, DC. His artistic research cultivates processes and experiences that are participatory and intergenerational, moving through known and unknown, and bring a poetic lens to a specifically queer experience.

An organizing principle of Matthew’s work is a commitment to centering LGBTQ+ artists and experiences, and collaborating across disciplines to expand the social relevance of his work and to broaden the notion that every body can dance. His choreography and dancemaking- considered “a blend of risk-taking with reliability, [and] a combination of uncertainty and wisdom,” by Kate Mattingly- weaves together a physical vocabulary of momentum and clarity, revelatory moments, and a belief in a body’s capacity to document and reflect back our lived experiences. He is the Founder of Matthew Cumbie Projects, the central body to further and support the work of Matthew and his collaborators.

In 2016 he began Growing Our Own Gardens, a multiyear performance project to contend with a growing need for intergenerational LGBTQ+ dialogue. With support from the National Endowment for the Arts, the Arcus Foundation and Dance Exchange, Gardens blossomed into an iterative process that partners with LGBTQ+ and arts organizations in multiple cities to use performance and engagement as a platform to surface stories, struggles, and possibilities of queer communities: to reflect and re-imagine LGBTQ+ life in our communities and country. Through Gardens, he has partnered- and continues to partner- with the Rainbow History Project, the DC Center, the Rainbow Seniors of Berkshire County, and the Dallas Way- creating short form and evening-length performances, facilitating workshops and discussions, and leading embodied engagements (like Queer History Walks).

Committed to this range of outcomes, Matthew’s dancemaking has been shared and shown on stages, in parks, in classrooms, on online learning platforms, in a car, and in healthcare settings with people of all ages and backgrounds. He is currently an artist-educator with Jacob’s Pillow, including their Curriculum in Motion program: a residency program that brings choreographers into classrooms to animate and integrate movement and dance to support cross-curricular learning. With Dance Exchange, he has helped develop and brand Cassie Meador’s Moving Field Guide: a program that connects artists with scientists, naturalists, and environmental educators to help people learn about environmental issues, and that has partnered with park rangers in the Great Smoky Mountain National Park, US Park service educators in the Boston school-district, and local historians and environmental experts in communities across the US. While with Dance Exchange, Matthew also stewarded the growth of ways that people connect to Dance Exchange through local programming. Matthew has been on faculty at Texas Woman’s University, Queensborough Community College, Colby College and American University; he has been an invited speaker at the New York City Roundtable Arts in Education conference, the Advancing the Human Condition Symposium at Virginia Tech, and the LGBT Health and Art Making conference, in partnership with the Human Rights Commission and the GWU Health and Well-being graduate program.

He has danced in the companies of Christian von Howard, Keith Thompson | danceTactics Performance Group, jill sigman | thinkdance, Paloma McGregor | Angela’s Pulse, and Dance Exchange- an intergenerational dance organization founded by Liz Lerman- where he joined as the first full-time artistic appointment in a post-founder transition and eventually became an Associate Artistic Director and the Director of Programs and Communications. Currently, he creates work with Annie Kloppenberg, Betsy Miller, and Tom Truss, and collaborates with a host of multidisciplinary artists through Matthew Cumbie Projects; he is also dancing with Christopher K. Morgan & Artists on the creation of a new work. His work has been commissioned and supported by places like Dance Place, the Kennedy Center, and Harvard University, and by the National Endowment for the Arts, the DC Commission for the Arts and Humanities, the Arcus Foundation, and the Somerville Arts Council. Originally from Houston, Texas, Matthew holds undergraduate degrees from Texas Lutheran University and Texas State University and an MFA in dance from Texas Woman’s University.

As a performer, she collaborated with Miguel Gutierrez from 2001-2015, receiving a 2010 New York Dance and Performance Award “Bessie” for her performance as James Dean and collaboration in the creation of “Last Meadow” and 2015 “Bessie” nomination for her body of work with Gutierrez. Other artists she has worked with include Heather Kravas, Aine Stapleton, Bebe Miller, John Jasperse, John Scott, Deborah Hay (William Forsythe commission “If I Sing to You”), David Wampach, Donna Uchizono, Mark Dendy, Neal Medlyn, Christine Elmo, Neal Beasley, Beth Gill, Judith Sanchez-Ruiz, Doug Varone (Metropolitan Opera Ballet, Opera Colorado), Gabriel Masson, and playwright/director Rosie Goldensohn. She is part of the teaching faculty at Movement Research and The New School/Eugene Lang College in New York. She has also been faculty Hollins University and the University of Illinois, as well as a guest teacher at dance institutions throughout North and South America, Europe, Australia, and Asia. She received her B.F.A. from the University of Illinois, Urbana-Champaign. As a Certified BodyTalk Practitioner since 2008, Michelle has treated hundreds of clients in New York and internationally through her online individual and group work at MBodyRadiance.com. 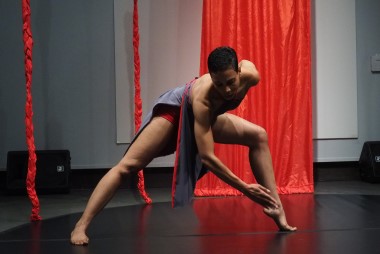 Cara Hagan is an interdisciplinary artist whose practice is informed by movement, words, digital space, contemplative practice, and community. Ms. Hagan has the pleasure of sharing her artistic pursuits across the United States and abroad. Most recently, Cara has set choreographic works on students at the UNC School of the Arts, Roehampton University in London, Gonzaga University, and on professional dancers at the Dance Barn Festival in Battle Lake, MN. Her recent guest residencies have included Thirak India in Jaipur, India, Roehampton University in London, James Madison University, and at UC Boulder, where she was a guest artist as part of the 2017 U.N. {W.R.A.P} Series. Further, Cara has made recent performance appearances at the Performática Festival in Puebla, Mexico, at Three House Arts in Durham through the Durham Independent Dance Artists, the Asheville WordFest, the On Site/In Sight Dance Festival, and the Scottish Conference on Geopoetics in Edinburgh.

Cara presents her research regularly at universities, festivals and conferences around the world. A regular presenter at the National Women's Studies Association annual conference, she served as co-Chair for the Women of Color Leadership Project pre-conference sessions from 2016-2018. Her work on screendance has most recently been presented at the Loikka Dance Film Festival/Future Screens of Dance Conference in Helsinki, Finland, at DeMontfort University in Leicester, UK, and at the University of Wisconsin, Madison. A recipient of several awards, Cara's film Sound and Sole was awarded the "Best Southern States Documentary" at the 2018 Southern States Indie Fan Film Fest. She was most recently honored by the Governor of North Carolina and the NC African American Heritage Commission for her work as an African American artist in North Carolina and beyond. Other awards include a 2014-2015 NCAC Choreographic Fellowship Award, a 2015 Sustainability in the Arts Grant and a 2015-2016 University Research Council Grant. Ms. Hagan serves on the dance studies faculty at Appalachian State University, as well as serving as director and curator for ADF's Movies By Movers, an annual, international dance film festival under the auspices of the American Dance Festival. Cara's scholarly and creative work can be found in various publications, including the Snapdragon Journal of Art and Healing, Collective terrain, Quill and Parchment, Headwaters Journal of Expressive Arts, the International Journal of Screendance, and in the book, Dance's Duet with the Camera: Motion Pictures, edited by Telory D. Arendell and Ruth Barnes. Currently Cara is under contract to complete her first solo-authored book through McFarland Publishing. 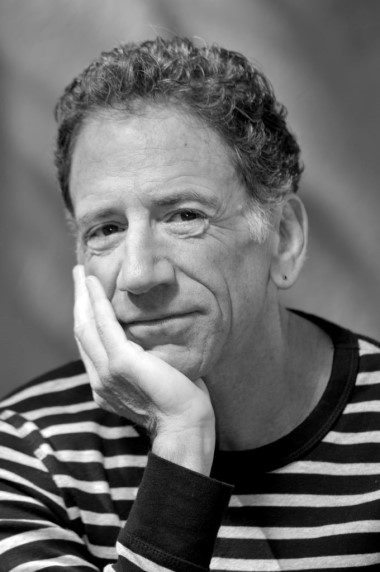 Stuart Pimsler is a choreographer, director, writer, performer, founder and Artistic Co-Director of Stuart Pimsler Dance & Theater (SPDT). His work has been honored with Choreography Fellowships from the National Endowment for the Arts and McKnight Foundation and as well as a Major Fellowship and six Individual Fellowships from the Ohio Arts Council. Mr. Pimsler has been commissioned by the Guthrie Theater, the Lila Wallace Arts Partners Fund, National Performance Network Creation Fund, the Jerome Foundation, the Wexner Center, University of Minnesota, the Walker Art Center, The Wharton Center at Michigan State University among others. In 2012, Mr. Pimsler was a guest artist at the Beijing Modern Dance Festival and in 2014 was one of three U.S. choreographers invited to Australia under the auspices of American Dance Abroad.

Mr. Pimsler holds an A.B. in English from Franklin & Marshall College and a J.D. from Catholic University School of Law. He was admitted to the New York State Bar in 1975 and the following year was accepted as an M.F.A. Fellow in Dance at Connecticut College. His mentors have included Martha Myers and Daniel Nagrin, whose solos Spanish Dance (1948) and Word Game (1968) he continues to perform. As cultural activist, Mr. Pimsler has served on the Board of Directors of Dance/USA (1990-97) and the Steering Committee of the National Performance Network (1992-95). He has served as panelist for the National Endowment for the Arts, the McKnight Foundation, Bush Foundation and an array of arts councils and agencies throughout the U.S.  In 2005, Pimsler founded The SAGE Awards for Dance, an annual celebration of outstanding dance achievements throughout Minnesota which  he co-coordinated with Dana Kassel through 2016.